VATICAN CITY (RNS) Even as Pope Francis was on his way to the violence-plagued Central African Republic almost two years ago, security advisers warned him that it was an active war zone and they couldn’t guarantee his safety.

“If you can’t manage it, give me a parachute,” the pontiff told the pilot of his plane before they landed.

It was meant as a joke, but the threat was real, and so is Francis’ determination to push ahead no matter what the perils.

RELATED: Canadian Copts ponder the future of their faith back in Egypt

On Friday (April 28) the pope will once again embark on another risky trip: This time he’s going to Egypt, cradle of a venerable civilization, for centuries a leading force in the Islamic world — and today home to an ancient Christian population facing increasing persecution.

A central focus of this 36-hour Cairo trip will be dialogue and diplomacy, an attempt to build bridges with Muslims while offering a powerful statement to the world that religions can come together to oppose violence carried out “in the name of God.”

In a message ahead of his visit, the pontiff said he hoped to bring “a message of fraternity and reconciliation” to all “children of Abraham, particularly in the Islamic world,” while making a contribution to “interreligious dialogue.”

That contribution is to take place during the major set piece event of his trip: a speech to a conference on peace organized by Al-Azhar, the 10th-century mosque and university that is the seat of learning for the Sunni Islamic world, which comprises nearly 90 percent of the world’s 1.6 billion Muslims. 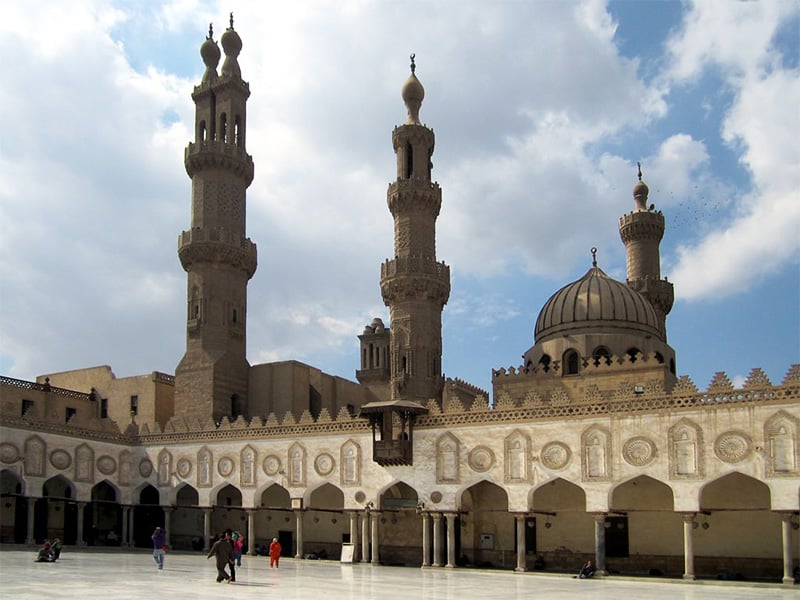 The Al-Azhar Mosque and University in Cairo in February 2013. The mosque’s sheikh is Egypt’s leading theological authority. Photo courtesy of Creative Commons/David Stanley

Al-Azhar plays a crucial role in the interpretation of the Quran, an important task given that extremists such as the largely Sunni ideologues of the Islamic State group try to use its texts to justify terrorism.

When the pope speaks on Friday, the Muslim world will be listening.

Francis has earned the respect of Islamic leaders for his insistence on de-linking  extremist-inspired violence from the Islamic faith.

The pontiff’s stand against religious violence comes, however, as Egypt’s Christians are increasingly coming under fire: On Palm Sunday, 45 people where killed in bomb attacks on two churches, one in the Nile Delta city of Tanta and the other in Alexandria. ISIS militants, who are fast gaining a foothold in the country, claimed responsibility for this latest atrocity against that community. People mourn for the victims of the Palm Sunday bombings during their funeral at the Monastery of St. Mina (Deir Mar Mina) in Alexandria, Egypt, on April 10, 2017. Photo courtesy of Reuters/Amr Abdallah Dalsh

Egyptian President Abdel-Fattah el-Sissi has declared a state of emergency in the country, which means security will be extremely tight throughout the pope’s visit.

In a briefing with journalists, a Vatican spokesman said Holy See officials were not worried about security problems and that Francis will not use a bulletproof vehicle.

Francis won’t, however, use an open-top popemobile and will instead opt for what is described as a “golf buggy” when he greets crowds for a Mass at the air defense stadium on Saturday.

Given the recent attacks, Francis is expected to speak out for the plight of persecuted Christians, who make up around 10 percent of the country’s 92 million-strong population.

Francis has frequently decried violence against Christians in the Middle East and has hailed them as “new martyrs” who are even more plentiful than those killed under Roman persecution in Christianity’s early centuries.

In his message ahead of the visit, the pope said that he wants his time in Egypt to be an “embrace of consolation and encouragement to all Christians in the Middle East.”

Still, Francis will have to choose his words carefully. For one thing, he does not want to spark a backlash against Christians, who will remain targets for extremists even after he returns to Rome.

Also, when Pope Benedict XVI — whose retirement in 2013 paved the way for Francis’ election — spoke out for greater protections for Christian minorities in Egypt back in 2011, Cairo took offense and withdrew its ambassador to the Vatican. 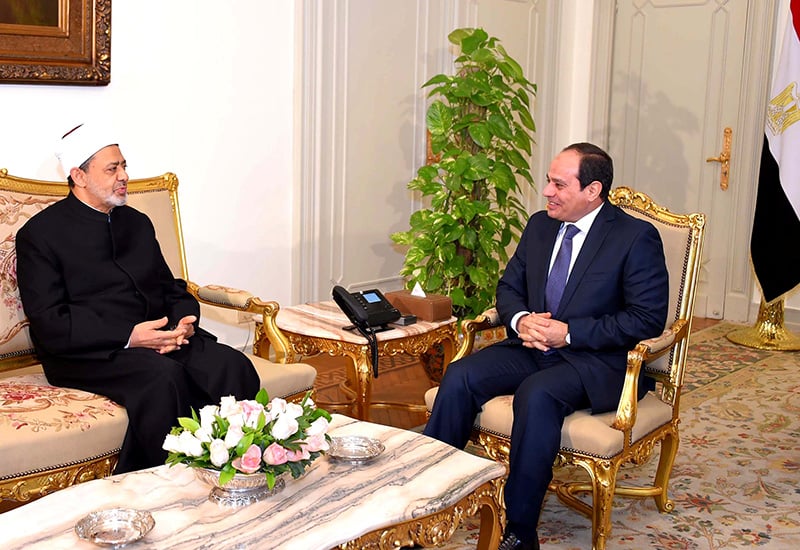 Al-Azhar followed suit by cutting ties with the Holy See. Those links with the Vatican had only just begun after the fallout from Benedict’s famous 2006 Regensburg lecture in which he quoted a 14th-century Byzantine emperor complaining that the Prophet Muhammad brought only what was “evil and inhuman” and spread the Islamic faith “by the sword.”

Under Francis, the Vatican has since formally re-established ties with Al-Azhar while leaders from the Pontifical Council for Interreligious Dialogue recently met with Islamic scholars to discuss combating religious violence.

At the same time, there are those in Francis’ own church who believe the pope’s approach to Islam is naive and that dialogue with fundamentalists is impossible.

“The pope comes from Argentina. He doesn’t know Islam,” the Rev. Samir Khalil Samir, an Egyptian Jesuit, told reporters in Rome earlier this month. “In my opinion, his lack of knowledge about Islam does not help dialogue.”

Samir said the Islamic State group and the Muslim Brotherhood in Egypt were trying to “Islamize” countries in North Africa and the Middle East, though he stressed that the vast majority of Muslims are opposed to the “inhuman crimes” of violence.

Sources on the ground say extremism has increased since el-Sissi came to power in a military coup in 2013, overthrowing Mohammed Morsi and the Muslim Brotherhood; Morsi had won power as the country’s first freely elected leader.

In order to keep control of dissatisfied Muslim Brotherhood followers, el-Sissi’s military regime has cracked down on dissent and has been accused of ignoring human rights.

Ties between Italy and Egypt have also been strained by the case of Giulio Regeni, an Italian graduate student at the University of Cambridge who was brutally tortured and murdered while spending time in Cairo researching the country’s trade unions. The strong suspicion is that the country’s security services were behind his death.

Francis, who follows in the footsteps of St. John Paul II’s pathbreaking visit to Egypt in 2000, is likely to steer away from internal politics and emphasize the long history of peaceful coexistence among religious faiths in Egypt.

In his message to Egyptians, Francis pointed out that he was going to the land where, according to the Gospel of Matthew, Jesus and his family took refuge from the wrath of Herod the Great more than 2,000 years ago.

Christianity was first brought to Egypt by St. Mark, with the Coptic Orthodox Church breaking off from mainstream Christianity in 451 after a disagreement over the Council of Chalcedon’s definition of Christ’s divine and human nature. Egyptian President Abdel-Fattah el-Sissi, right, shakes hands with Pope Tawadros II, the 118th pope of the Coptic Orthodox Church of Alexandria and patriarch of the See of St. Mark Cathedral, to offer condolences for the victims of the Palm Sunday bombings in Tanta and Alexandria, in the Abassiya Cathedral in Cairo on April 13, 2017. Photo courtesy of the Egyptian presidency/Handout via Reuters

Today the Copts, who have their own pope, Tawadros II, make up the vast majority of the roughly 9 million Christians in the country. Catholics loyal to Rome account for only around 272,000; Francis will celebrate Mass for them in Cairo on Saturday morning.

Along with the focus on interfaith dialogue, the visit will also have an ecumenical element: Francis is due to meet Tawadros — who had been saying Mass in one of the churches that was attacked on Palm Sunday — and will be joined at the Al-Azhar peace meeting by the global leader of Eastern Orthodox Christians, Patriarch Bartholomew of Constantinople.

The pope’s visit is brief but rich with references to pivotal episodes from history that continue to resonate today, and not always for ill.

Francis’ visit this week in fact has echoes of the one undertaken during the Crusades nearly 800 years ago by the pope’s namesake, St. Francis of Assisi, who, with another friar, crossed bloody battle lines in Egypt to meet with the Islamic military leader at the time, Sultan al-Kamil.

Barefooted and wearing rough robes, St. Francis appealed for peace in an encounter that has gone down as a powerful symbol of Christian-Muslim dialogue.

In the same way, it may be this latter-day Francis’ presence in Egypt that delivers the most powerful message.

(Christopher Lamb is the Vatican correspondent for The Tablet of London)