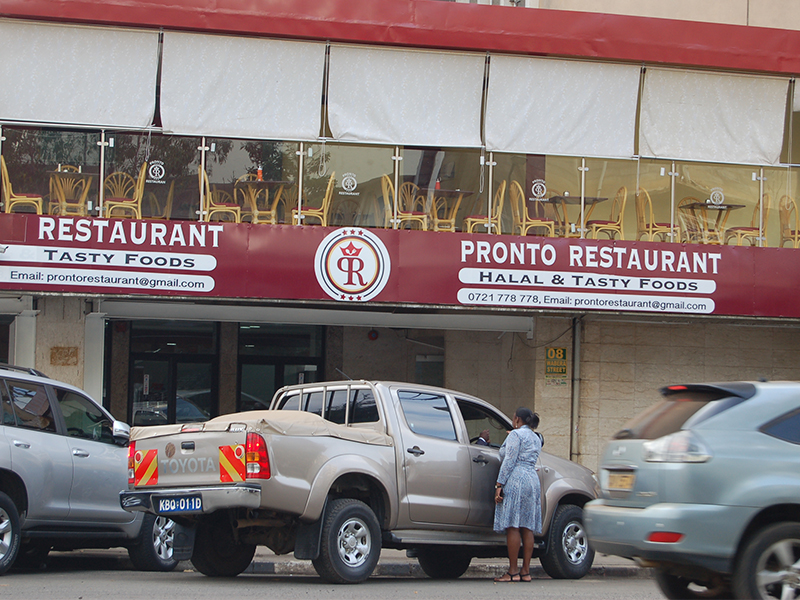 NAIROBI, Kenya (RNS) In a country where 82 percent are Christian, halal, the dietary standard in Islamic law, is finding greater acceptance.

Kenya is now home to a modest 100 halal-compliant food industry businesses, offering Muslims a choice of offerings and convenience, but that market may be growing.

In addition to the country’s estimated 4 million Muslims (out of 42 million), halal is finding favor among Christians as well.

“When I eat here, I also promote religious tolerance,” said Lynn Wambui, a 22-year-old Christian, who ate at Pronto, a restaurant specializing in halal foods. “The food is also tasty.”

Halal, which means “lawful” or “permitted” in Arabic, requires that meat such as beef, lamb, goat and poultry be raised and killed humanely and that a blessing be said at the time of slaughter. Nonhalal foods include carnivorous animals and birds of prey, as well as pork and products derived from pork such as gelatin. Fish, vegetables, fruits, nuts and grains are permitted.

“What is happening in Kenya reflects developments in the rest of the world,” said Abdullah Kheir, a religious scholar at Umma University in the coastal city of Mombasa. “Halal generally is becoming more acceptable.”

According to Kheir, most people find the food less risky since there are strict guidelines governing its slaughter.

“They are sure that the meat is not from forbidden animals such as dogs or donkeys or even pork,” said the scholar, who teaches Shariah and Islamic studies.

The Rev. Wilybard Lagho, a Roman Catholic priest in the Mombasa Archdiocese, said care needed to be taken such that they are used in an inclusive way.

“At a time when there is Islamophobia, such symbols can be easily misinterpreted,” said Lagho.

Halal also applies to other sectors such as cosmetics and beauty. Globally, the sector is believed to be worth $2.3 trillion. Kenya has developed a certification and regulatory frame to meet the standards.

Mohammed Hagi, the director of Kushitic, a beauty and cosmetic outlet in Nairobi, said that although most of his customers are Christians, he cannot sell the hair often used for braiding or as weaves or wigs.

“It’s forbidden by the law,” said Hagi.  “We do not stock them. We sell what is permissible, including perfumes, makeup, oils.”