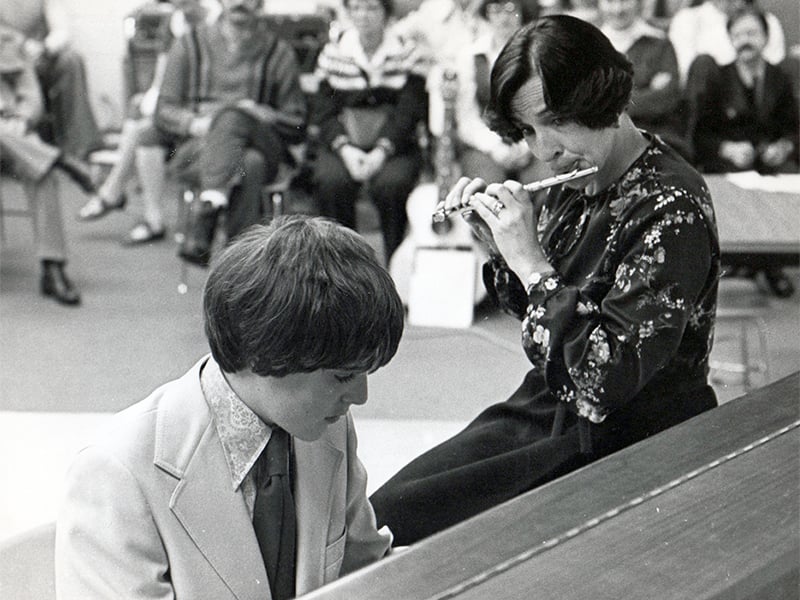 Stephen Edwards plays piano during a duet with his mother, Rosalie, during his youth. Photo courtesy of Stephen Edwards
May 11, 2017
Kimberly Winston

(RNS) Most sons send their mom a card or maybe some flowers for Mother's Day. Film composer Stephen Edwards, a Catholic, wrote his mom a requiem Mass, complete with 50-voice children's choir, a 100-voice adult choir and 50 musicians.

Oh, and he got it performed at the Vatican and it aired on Italian television.

This weekend, "Requiem for My Mother," an hourlong documentary about Edwards, his mom and the staging of the requiem, airs on most PBS stations. Edwards, who is 55 and has scored dozens of films and television shows, talked with RNS about his mother, Rosalie, who died somewhat suddenly of ovarian cancer in 2006. He talked about how writing a requiem — a musical Mass for the dead — helped him both honor her and move beyond his grief. The following interview has been edited for length and clarity.

The year 2006 was not a good one for you. You lost your mom, your dad and both of your dogs. How did writing a requiem help you deal with that?

I think when my mom, Rosalie, died I was just so helpless. There was just nothing I could do. Her downhill spiral was a pretty quick one. So for me to express my feelings of loss and anger and sadness and all those pent-up emotions that come into play when you lose someone, I turned to music, I turned to the thing I do. I wanted to give something to someone who gave me so much. She gave me life and was my first musical muse. She introduced me to everything from Bach to the Beatles to Broadway shows. There was music in the house all the time. So my reason for doing this was to give something back to her and to have my own cathartic experience to deal with the loss of her.

Your mother was a flutist with the Ann Arbor orchestra. In the opening of the requiem, there is a flute solo. Tell me about the decision to have the flute solos combined with the children's choir.

If you look at the Latin text (of the requiem), it says "rest in peace," "we wish you well" and "may your soul live forever in heaven." So, to me, we are trying to describe the indescribable with music. I could have scored it for oboe or cello, but to me, the flute was my mother. The juxtaposition of the children singing that first melody that keeps coming back is related to that. I could have had sopranos sing it, but children have an entirely different persona than adults when they sing, full of innocence and hope and aspirations. And it is a maternal sound too. She was first and foremost a mother. The fact that children are sending her goodwill, sending her off, just made so much sense to me dramatically and all I had to do was fill in the notes.

In the documentary, a recording engineer breaks down in tears describing how your requiem spoke to him. Have other people expressed something similar?

There are so many stories like that. One was a woman who sang in this performance who told me her brother, a Marine, was killed in a helicopter accident. She said, "It sort of shut me down, I sort of checked out." But when the chance to sing this requiem came along, it started her singing again. I realized very quickly this was cathartic for me, but as soon as it was written, it was for other people. It was them being able to appreciate those that came before us and to acknowledge the roles they played in our lives.

How do you listen to "Requiem for My Mother" now?

I am going to do a solo piano version of the requiem. I am going to play all the themes from all the movements but just on piano. We’ll release that recording sometime this year. But the message I am sending to everybody is I want this performed. There are school choirs, college choirs, festival choirs and they are always looking for music to perform and I would say perform this piece. We want this to be out there and be performed so other people can experience it live, too.