LONDON (RNS) A week after a terrorist bomb killed more than 20 and left scores injured, the people of Manchester will make their way through the streets of their grief-stricken city in one of its most traditional and religious events: the Whit Walk.

This will be a moment where the old Manchester meets the new, when the Christian tradition of the walk, commemorating the Feast of Whitsun — or Holy Trinity — meets the secular rituals that have come to define public mourning since this increasingly irreligious nation said goodbye to Princess Diana, who died 20 years ago.

Then the people, as much as the churches, began to take responsibility for public mourning.

The 200-year-old walk Monday (May 29) will begin at the cathedral just a few hundred yards away from the arena where a suicide bomber set off an explosive belt at the end of an Ariana Grande concert, with the seeming intention of targeting her young fans. The walk will make a stop at Manchester town hall, where thousands have gathered on recent evenings for vigils to commemorate the dead.

These vigils are a more contemporary, secular expression of ritual, with their ever-growing piles of flowers, candles and balloons left by people to honor the dead of the Manchester Arena atrocity. The laying of flowers and the lighting of candles do suggest Christian ritual, but they are the practices of people who are not necessarily members of a religion.

The Whit Walk, by contrast, is an overtly religious event. In most years — as Manchester Cathedral describes it, the walk is “all about celebration and joy. The watching crowds see Christians laughing, smiling, singing and some dressed in bright colors. It says to them that the Church is a welcoming place.”

It will be hard for the people of Manchester to express much joy this year, but the Whit Walk remains a collective experience that, like many others this week, has proved so vital to those who want to express their solidarity with the victims of the attack. But the walk is different from most of these gatherings, because of its religious nature.

Britain, with much of Europe, is an increasingly secular nation. A new survey on faith, traditionally defined by the Anglican Church here, shows that affiliation with formal religion, particularly Christianity, is in sharp decline. Now 49 per cent of the population are “nones,” those who do not identify with a religious tradition. That compares to a quarter of Americans, according to the Pew Research Center.

Yet the “nones” do have religious beliefs of their own, despite not belonging to a church, mosque or temple, said Stephen Bullivant, professor of theology and the sociology of religion at St Mary’s University, Twickenham, and the author of the report. They believe in God and pray. It is these people, believes Bullivant, who are influencing the rituals of grief on display in Manchester.

“At least a quarter of the ‘nones’ do engage in prayer and you see expression of some kind of religiosity at times of horror and grief like this. When there is a pressure point something religious comes to the surface,” he said.

How different this contemporary expression of grief is to the past can be seen in the news reports of what happened almost 60 years ago in February 1958 when Manchester faced another dreadful tragedy that cost young lives: the Munich air disaster in which eight players for the Manchester United soccer team were killed in a plane crash, players who in death became known as “The Flowers of Manchester.”

Then, there were no balloons in the city center, or day after day of the laying of flowers. Instead Manchester waited for the funerals to pay its respects, with a six-mile long queue of traffic to the outskirts of the city for the funeral of one player.

The large-scale, quasi-religious expressions of mourning now seen in Manchester — and elsewhere when tragedy strikes in Britain and beyond — began 20 years ago with the death of Princess Diana in a Paris car crash. In the week after her death, crowds flocked to her home in London’s Kensington Palace, and to where her body rested in the chapel of St James’s Palace, bringing flowers and lighting candles.

“Diana’s death was the turning point. The immediate response was orchestrated by the people, rather than the churches,” said Linda Woodhead, professor of the sociology of religion at Lancaster University, who has studied these contemporary mourning rituals.

“What we are seeing now is people instinctively coming together to create bonds and express values. We see religious influence but in Manchester it went even further from religious or humanitarian convention. Rather, the emphasis was on being Mancunians (as those who live in the city are known); there was a localization of universal values of kindness and love but also of diversity.”

Formal religion has played its part in Manchester since the bombings. And sometimes the line between the religious and the secular blurs.

The Church of England’s Bishop of Manchester and the Catholic Bishop of Salford attended the vigil with other religious and civic leaders, and had helped lay the groundwork for the event.

“I had been working for three years to bring religious leaders, including imams, together, and to work with civic leaders,” said David Walker, the Bishop of Manchester. “So we had the network in place; we could move fast when this atrocity happened. It helped bring the city together for the vigils.”

Relatives of the dead are still waiting for the coroner to release the bodies for funerals, but the language used in their comments about their bereavements are informally religious. “She is singing with the angels,” said the mother of 15-year-old Olivia Campbell, who was killed in the explosion.

The families of victims Chloe Rutherford, 17, and Liam Curry, 19, said in a statement: “On the night our daughter Chloe died and our son Liam died, their wings were ready but our hearts were not.”

“Many of the people who do not have a formal religion do have belief in God, in souls going to heaven, and in angels. They like pilgrimages and candles,” said Woodhead. “This is very different to the Protestant tradition in England. It is like a de-Reformation,” she said, referring to how Catholic practice and ritual was disapproved of after the English Reformation and Puritan era.

Manchester is a city with two passions – music and football. On Thursday morning as the city marked a minute’s silence for the victims, people at the main gathering chose not to sing a hymn, but the song “Don’t Look Back In Anger” by the Manchester band, Oasis.

But as Manchester United’s players celebrated their triumph in the Europa League on Wednesday night, they were photographed holding a banner, Manchester: a city united. Beneath it was the hashtag: #prayforManchester. 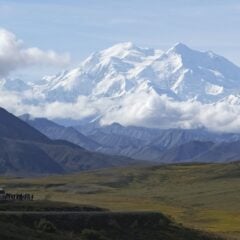 Religion Hub
Itching to get away this summer? Remember the six stages of transformative travel 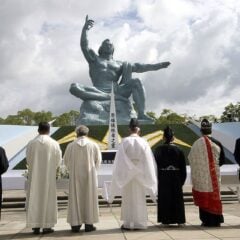