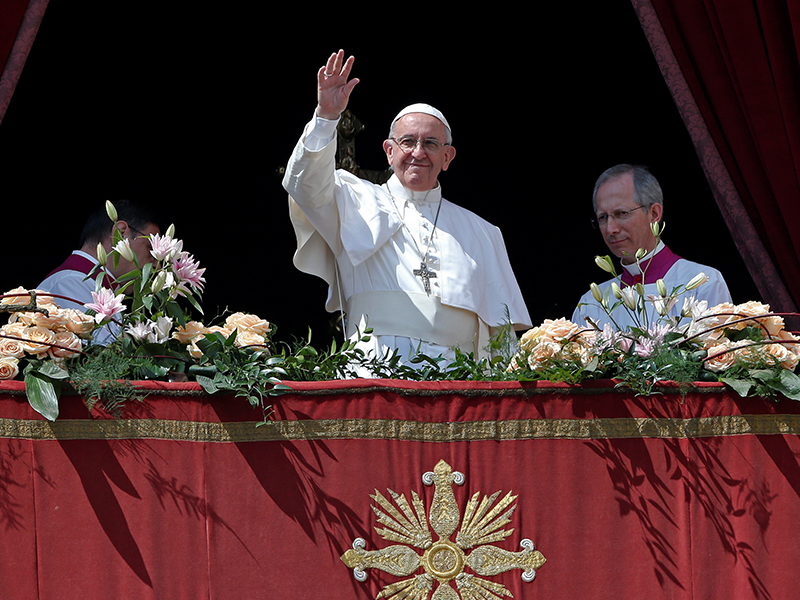 Pope Francis waves at the end of his "Urbi et Orbi" (to the city and the world) message from the balcony overlooking St. Peter's Square at the Vatican on April 16, 2017. Photo courtesy of Reuters/Stefano Rellandini
May 30, 2017
Yonat Shimron

VATICAN CITY (Reuters) The Vatican has scrapped tentative plans for Pope Francis to make a visit this year to South Sudan, which has been hit by civil war, famine and a refugee crisis.

Vatican spokesman Greg Burke said Tuesday (May 30) the trip "was not for this year" but did not say when it might now take place.

Church leaders in the country said they had expected the pope would visit the capital, Juba, probably in October, but the Vatican had never announced the trip officially.

Burke did not give a reason for the cancellation but Vatican and church sources said it was a combination of security concerns and logistics.

The trip was to have lasted only one day and the pope was to have flown in after spending a night in another African country.

He was to have made the trip with Archbishop of Canterbury Justin Welby, head of the worldwide Anglican Communion, in an effort to promote unity in the mostly Christian country.

Oil-producing South Sudan, which became independent in 2011, descended into civil war in December 2013 when a dispute between President Salva Kiir and his sacked deputy Riek Machar exploded into fighting, often along ethnic lines. Both sides have targeted civilians, human rights groups say.

Kiir is a Roman Catholic who regularly attends services at the cathedral in Juba in his trademark cowboy hat.

A church source said one reason for the cancellation was that a Vatican advance team was not able to secure guarantees that people of both ethnic groups would be able to attend a papal Mass of reconciliation. He said the pope also wanted to visit refugees.

The conflict in the world's youngest country has sparked Africa's worst refugee crisis since the 1994 Rwandan genocide and plunged parts of the country into famine.

On top of the civil war, South Sudan has been hit by the same east African drought that has pushed Somalia to the brink of famine. Nearly half of the population of 5.5 million people face food shortages, according to the United Nations.

In March, a confidential U.N. report seen by Reuters said the government was mainly to blame for the famine, saying it was boosting its forces by using millions of dollars from oil sales.