WASHINGTON (USA Today)  True to its word, the Trump administration is moving to reverse Obamacare’s requirement that most employers provide free coverage of birth control to their employees.

Health officials are drafting a regulation rolling back the so-called “contraceptive mandate” that their Democratic predecessors implemented after the Affordable Care Act’s passage in 2010, and which became the subject of two Supreme Court battles in 2014 and 2016.

While not yet final, the regulation appears intended to let employers avoid providing birth control coverage if they object for any reason — an expansion of the original effort to exempt those with religious objections. As a result, abortion rights groups warn that up to 55 million women could lose free birth control coverage — something that saves them $1.4 billion annually.

“The birth-control coverage benefit in our nation’s health care law was the single greatest advancement in reproductive health care in a generation,” said Kaylie Hanson Long of NARAL Pro-Choice America. “It gave millions of women more control over their own lives by making birth control affordable and accessible, and it was fiscally responsible to boot.”

But conservative groups that battled the Obama administration in court over the insurance coverage mandate heralded the emerging policy, which would be implemented even before public comments are solicited, rather than the other way around.

“At long last, the United States government has acknowledged that people can get contraceptives without forcing nuns to provide them,” said Mark Rienzi, senior counsel at the Becket Fund for Religious Liberty. “That is sensible, fair and in keeping with the president’s promise to the Little Sisters and other religious groups serving the poor.”

The draft regulation, reported by The New York Times and later unveiled by Vox, was promised by Trump four weeks ago when he signed an executive order promoting free speech and religious liberty. The order stopped short of permitting broad exemptions that gay rights groups claimed would allow for widespread discrimination, instead targeting two areas: allowing churches to engage in political speech and addressing “conscience-based objections to the preventive-care mandate.”

The original regulation was successfully challenged in 2014 by the Hobby Lobby chain of craft stores and others, who won a 5-4 Supreme Court ruling that said they could have the benefit delivered directly by their insurance plans.

Religious nonprofits, including the Little Sisters of the Poor, wanted to avoid even that degree of involvement. That led to a second high court case in 2016, which the justices attempted to settle with an unusual order directing the groups and the government to work out their differences in lower courts.

Once the final rule is implemented, women’s groups say it will be up to the states — and possibly the courts — to protect insurance coverage for contraceptives.

“This rule would mean women across the country could be denied insurance coverage for birth control on a whim from their employer or university,” said Dana Singiser of Planned Parenthood Federation of America. “It makes a farce of the Trump administration’s so-called ‘women’s empowerment’ agenda and endangers a woman’s ability to make the most basic and personal of decisions — when and if to have a child.”

Some states, including California, Illinois and Maryland, have enacted laws designed to protect women from losing their right to free birth control. Nevada’s Legislature has passed a similar bill, and legislation has been introduced in New York, Massachusetts, Connecticut, Rhode Island, Maine, Oregon and Washington. 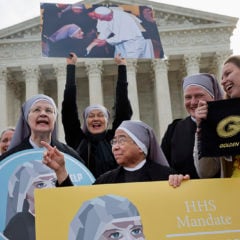