PHOENIX (RNS) After a fierce backlash on social media, Southern Baptists reversed course and adopted a statement denouncing “alt-right white supremacy,” calling it “antithetical to the Gospel of Jesus Christ.”

The unusual move on Wednesday (June 14) was a shift from the previous day, when the Southern Baptist Convention’s Resolutions Committee declined to bring to a vote a Texas pastor’s proposed resolution condemning the “alt-right” movement, whose members include white supremacists.

“(W)e denounce and repudiate white supremacy and every form of racial and ethnic hatred as a scheme of the devil,” reads the one-page statement distributed just before the last session of the two-day meeting.

Passage of the resolution was met with thunderous applause.

Resolutions Committee chairman Barrett Duke said Tuesday the original proposal was “too open-ended” and could be misinterpreted.

A day later, he apologized.

“We regret and apologize for the pain and the confusion that we created for you and the watching world when we decided not to report out a resolution on ‘alt-right’ racism,” he told messengers, or delegates, adding that he shares their abhorrence of the “particularly vicious form of racism that has manifested itself in the ‘alt-right’ movement.”

He said the new version of the resolution speaks with “conviction but also with compassion” and repudiates racism “in a tone that honors all people, even those with whom we disagree.”

The Rev. Dwight McKissic, who authored a proposed resolution about the Confederate flag at last year’s convention that was rewritten and passed, didn’t understand why the resolution wasn’t dealt with in a less confusing way. 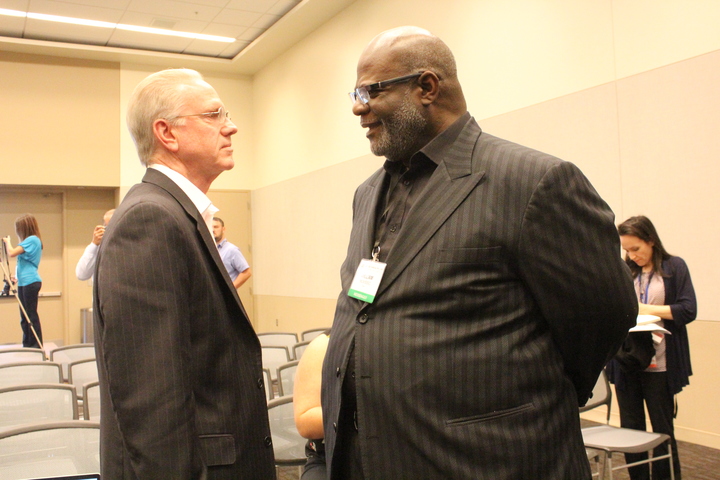 Barrett Duke, left, chair of the Southern Baptist Convention’s 2017 Resolutions Committee, listens to the Rev. Dwight McKissic, original drafter of a resolution criticizing the “alt-right” movement and white supremacy that was adopted on June 14, 2017. RNS photo by Adelle M. Banks

“I’m very heartened by the statement,” he said in an interview about the new version of the resolution.

But he added, “I guess I’m disappointed because they could have done that all the time.”

The resolution’s failure on Tuesday prompted indignation and anger as younger evangelicals, including African-Americans, took to social media to vent their feelings.

The decision made at #SBC17 to not denounce white supremacy is hurtful.

But the social media backlash was just another episode in the Southern Baptist Convention’s fraught history on race.

“There’s obviously a discomfort with this subject matter,” said McKissic.

The SBC was founded in 1845 in defense of slave-holding missionaries. In recent decades, leaders of the denomination’s public policy wing, the Ethics and Religious Liberty Commission, have pushed for stronger statements condemning that past.

Richard Land, the former commission head, was instrumental in the passage of a 1995 resolution in which Southern Baptists lamented slavery and apologized to African-Americans for condoning racism.

“When we stand together as a convention and speak clearly, we are saying that white supremacy and racist ideologies are dangerous because they oppress our brothers and sisters in Christ,” Moore said from a microphone before Wednesday’s resolution was overwhelmingly adopted.

There have been dozens of resolutions on race — at least 32, based on a new book, “Removing the Stain of Racism From the Southern Baptist Convention.”

“You can talk about problems all you want to,” said Patterson, who offered 10 new scholarships for black students after a photo of white faculty members at his seminary posing as rappers caused a stir earlier this year. “They don’t get solved by talking about them. They get solved by doing something about them.”

In the end, it was grass-roots pressure aided by a social media storm that caused the Resolutions Committee to reconsider.

“Now suddenly you have this panic,” said Alan Cross, a white Southern Baptist minister from Alabama who has written a book on racism.

McKissic, who said he was receiving calls from black Southern Baptists threatening to leave the convention, said, “I think we’re back to a good place after a 24-hour roller-coaster ride.”

In the end, black Baptists and white Baptists agreed that the denomination had ultimately done the right thing.

Matt Bowman, a white Tennessee pastor, believed it was important to pass a resolution whose meaning wouldn’t be twisted by others.

After influencing Southern Baptists to speak out on race-related matters two years in a row, McKissic said work on the issue is far from over. He welcomes the selection of Florida pastor H.B. Charles as the first black president of the SBC’s Pastors’ Conference earlier this week, and the continuing election of people of color to other one-year terms of leadership.

“Until minorities are included in the ownership of the convention — we’re a long way from there — we still got real problems here,” he said.

Roger S. Oldham, spokesman for the Southern Baptist Convention’s Executive Committee, said a 2011 report recommending steps to diversify leadership in the denomination’s seminaries and agencies has made a difference beyond the many resolutions that have been passed on the subjects of race and diversity.

“We’ve seen what we believe is a marked increase in the number of very highly qualified but perhaps previously unknown individuals from a number of racial and ethnic backgrounds,” he said.