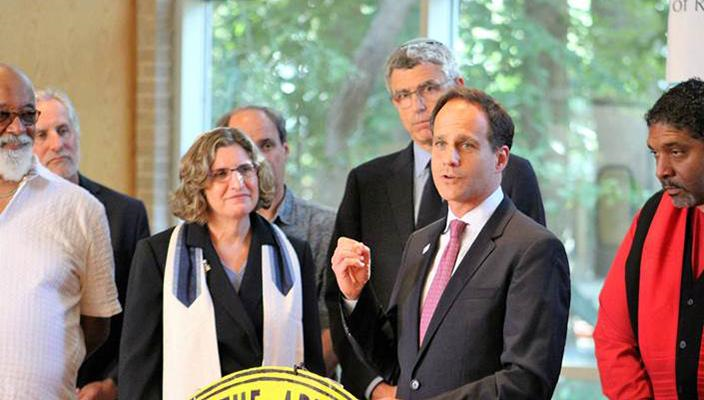 Excuse me — but are Jews chopped liver?

That was my reaction to the recent New York Times article about how ministers are becoming increasingly politically active, and fighting for social justice.

There was just one small problem with the article.

It was the journalistic equivalent of a generic country club in, say, Greenwich, Conn.

There were no Jews.

Odd, when you consider the findings of a new study, published by Yale University.

Eighty percent of Reform rabbis, and about 70 percent of Conservative rabbis, affiliate as Democrats.

Among Orthodox rabbis, nearly 40 percent identify as Democrats, and a quarter as Republicans.

By contrast, evangelical pastors are almost all Republicans. So are most Baptists.

Roman Catholic priests? An even split.

In other words: The Times did not write an article about liberal activism among rabbis and Jews — because such an article would be the equivalent of "dog bites man."

But, here's the question: Is it accurate to say that Judaism's default political position is liberalism?

I returned to a document that is now more than 50 years old — Commentary magazine's forum on "The Condition of Jewish Belief."

The forum contained this question: Does Judaism as a religion entail any particular political viewpoint?

The thinkers agreed that it would be difficult — or impossible — for a "good Jew" to espouse Nazism or racial segregation, or communism.

Come and learn — from three of the greatest Jewish minds of the last century.

Emil Fackenheim: "To bind Judaism to any one political standpoint would be sheer parochialism. To make it hospitable to all political viewpoints would be to fall prey to political quietism."

Arthur Hertzberg: "Judaism can permeate the individual Jew with the total feel of the tradition and then leave him to make his own personal choices in the realm of men's immediate actions [i.e., politics]. I remember my grandmother who said often about some matters, that 'a Jew doesn't do this.' One who is not alien to the inherited Jewish experience finds this standard both precise and most exquisitely moral."

Jacob Neusner: "Judaism may provide political insight. It is to be discovered through a search for the political implications of its theology, surely not through a hunt for texts proving whatever we have already decided we want to do. We have not been sufficiently serious about either a study of Jewish tradition, or reflection upon Jewish realities today, to say just what political insight Judaism has now to offer."

I offer these quotes, because they help illuminate one of American Judaism's burning issues: Should rabbis preach about politics?

My friend and colleague, Rabbi David Wolpe, thinks not.

I am endlessly besieged by requests to take on this or that political or social issue...If it is a left-wing cause, I will be rebuked for neglecting prophetic ethics, which is the guardian of the widow and the orphan (and the climate and the transgendered). If it is a right-wing cause, I will be reminded of the primacy of peoplehood and objective moral law (and the sanctity of unborn life and the free market)...You can love Torah and vote for Trump. You can love Torah and think Trump is a blot on the American system. What you may not do, if you are intellectually honest, is say that the Torah points in only one political direction.

My other friend and colleague, Rabbi Rick Jacobs, president of the URJ, disagrees:

Although one can certainly love Torah and follow different political paths, one cannot claim to be a lover of Torah and not care about how our society treats those in need, the weak, the vulnerable, the stranger and the oppressed.

Sermons that “speak up” on the great moral issues of our world and our lives may address politics and policy as a means of addressing such moral issues but they are not about politics. On the contrary, they are about our Jewish values; the values we teach and the values we pass on to our children; the values that have kept us together as a people for centuries.

Where do I stand on this?

As I wrote in the Forward, while rabbis can preach about politics, it is best to do so cautiously. Start with the Torah text; refrain from naming politicians and parties; don't advocate particular policies; avoid clichés; avoid self-righteousness; be humble.

It also requires being intellectually honest. As Wolpe writes: "If Judaism supports all the policies you believe anyway, can’t you be at least a little suspicious that your politics are guiding your Torah, and not your Torah leading to your politics?"

I do not know how rabbis can not speak of politics.

If rabbis refrain from speaking about the public place — about what is going on in the world — then rabbis will quickly become irrelevant.

Finally, David Wolpe asks for caution: "I know Rabbi Abraham Joshua Heschel marched with the Rev. Martin Luther King Jr. But issues like slavery and civil rights are very rare, once in a generation ... "

It seems to me that we have that "once in a generation" issue before us — right now.

It awaits its own "Heschel." It needs rabbinic voices.

Related Posts
By Amy Klein
What good is faith when your fertility treatments aren't working?
By Brandon W. Hawk
Stella Immanuel's theories about demons, illness and sex have a long history
By Alejandra Molina
Rep. Ted Yoho resigns from Bread for the World board after verbally attacking Ocasio-Cortez
By Adelle M. Banks
From changing lives to preaching at iPads: How clergy are coping with the new normal
By Jeffrey Salkin
I stand with Bari Weiss