WASHINGTON (RNS) As member of the Arizona House of Representatives, Athena Salman took her turn recently and offered an invocation before the start of the day’s business.

But the first-term Democrat from Tempe, is an atheist and her invocation did not reference a higher power.

“Take a moment to look around you at the people gathered here today,” Salman’s invocation began. “We come from a variety of backgrounds and interests, but the passion that ignites us; the fire that burns within us; is similar. We all seek to form ‘a more perfect union,’ creating change from an abiding passion to improve the lives of the humans of this city. There is wonder in that. More importantly, though, there is unity.”

That unity was shattered immediately after the invocation when Rep. Mark Finchem, a Republican, objected to the Arizona House leadership because the invocation did not appeal to a higher power. In February, Republicans added a rule that required opening invocations to do so.

The Republican speaker of the House, J.D. Mesnard, ruled Salman’s prayer violated the House rules. Finchem was permitted to give a second invocation, one that referenced Jesus.

This is not the first time the Arizona House had a dust-up over a godless invocation. In 2016, then-representative Juan Mendez — an atheist and Salman’s partner  — upset his Republican colleagues when he, too, failed to mention a higher power. Mendez is now a state senator, and when he repeated his invocation this year no one complained publicly.

Last week, Salman, 28, was in the nation’s capital to receive an award from the Secular Coalition for America, an umbrella organization of 18 atheist, humanist and freethought groups, which saluted her for standing up for “secular values,” including the separation for church and state. She sat down with RNS to discuss the reaction to her invocation and what it is like to be the only openly atheist member of the Arizona House. This interview has been edited for space and clarity.

How did you decide what to say in your invocation?

As an atheist, I don’t believe in a higher power in the way other people do. So in the invocation, which was written by James Fuchs, a member of the Humanist Society of Greater Phoenix, the idea was a belief in the goodness of humanity and how people can come together and do good. In my opinion, it was very focused on that. I thought the whole thing was very fitting and very powerful and a good way to orient one’s mindset and start the day’s business.

After your invocation, you held a press conference in a nearby park. What happened there?

The press conference was beautiful. The whole Arizona Democratic House Caucus, which I love for its diversity in religion, gender, ethnicity and race, stood by my side. There were also people from different faith backgrounds who spoke in support of me. That was very powerful — that religious people chose to stand with an atheist. On social media I have only had positive feedback. No one told me they didn’t agree with my invocation. People from other districts, other states and other religions sent me emails saying thank you for doing this. There were people who said “I am a Christian, but separation of church and state is important to me and you are standing up for that.” I think I struck a nerve that expanded across faith backgrounds. People want religion to stay out of government and they want the government to make decisions based on secularism, not religion.

How has this changed your idea of what you need to do going forward?

I believe in the work of intersectionality, and part of that is respecting and defending people’s right to choose or not choose religion. Given the polarized state of the federal government, we need that respect more than ever. I also felt empowered to be myself and share my own personal spiritual beliefs and provide a platform for the humanists who live in Phoenix, to share how they orient themselves to tackle the challenges of the day. Even though some members of the House did not agree with my invocation, I feel strengthened and supported by the public response. Atheists, humanists and other secularists are not going away. You cannot silence us. As a state representative, not only am I beholden to the Arizona state constitution, I am beholden to the U.S. Constitution and that is about upholding the values of a secular government. Both constitutions are on our side.

Absolutely. Coalitions are stronger and elected officials respond to them. It also humanizes people when you see what you have in common. I have come to realize that even though I am an atheist and because I am half-Arab, programs that target Muslims still have an impact on my life. Prejudice and hate lump everyone together. Under this administration, we truly are all under threat and the way you can stand strong in the face of great adversity is to be unified. The way to do that is to start thinking of the world through our shared human experiences.

In accepting your Visibility Award, you said you think you are the only openly atheist woman legislator at the state level. What do you hope to achieve by being open about your lack of faith?

I hope by saying I am openly atheist others will say, “I am too.” Being open begins to push back on the stereotypes people have about atheists — or any minority religion. By owning it and standing for values that are universal to humanity, people can make that connection and see that we are fighting for the values they believe in too. Ultimately in politics we are fighting over values and the biggest of these is equality. That is powerful and that is what people need to see. 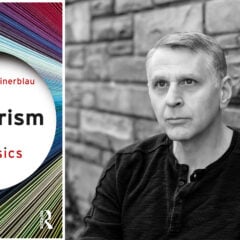 Signs of the Times
Public funding of religious schools is coming. The first lesson is compromise.
Follow us on Facebook!
Submit your photos to RNS