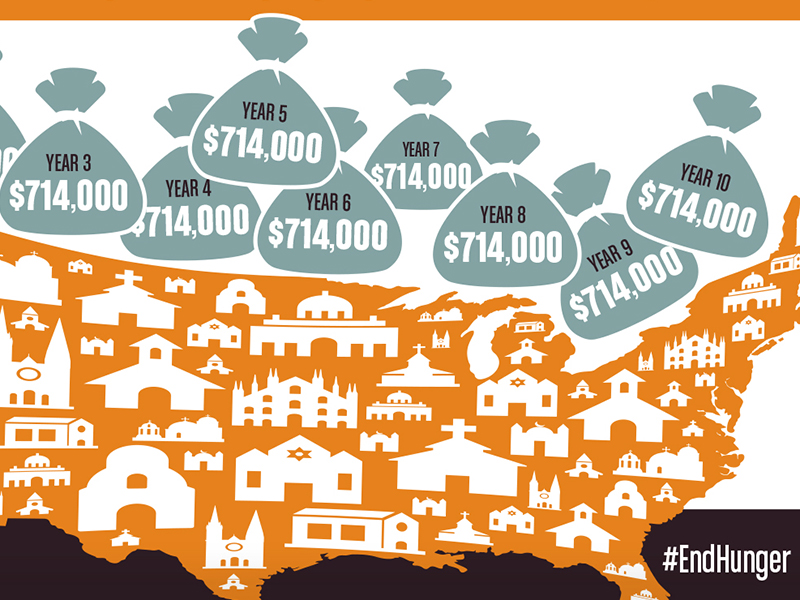 Bread for the World, a bipartisan organization mobilizing Christians to urge their lawmakers to end hunger at home and abroad, have figured every religious congregation in the U.S. would have to raise an additional $714,000 every year for the next 10 years to offset the budget cuts in President Trump's proposed 2018 budget. Infographic courtesy of Bread for the World
June 26, 2017
Emily McFarlan Miller

(RNS) A nonprofit has calculated that every religious congregation in the U.S. — Christian or otherwise — would have to raise an additional $714,000 every year for the next 10 years to make up for the 2018 budget cuts President Trump has proposed.

"There is no way our country’s 350,000 religious congregations can make up for the cuts in the services that help hungry, poor, and other vulnerable people,” the Rev. David Beckmann, president of Bread for the World, said in a written statement.

"Congress should not justify budget cuts by saying that churches and charities can pick up the slack. They cannot."

Officials at Bread for the World, a nonpartisan Christian anti-hunger group, were moved to do the math because, they say, lawmakers and conservative Christians often believe it's chiefly up to individuals through charitable contributions, as opposed to the government through taxes, to decide how to help the needy.

But this would leave millions of needy people without life-sustaining services, the organization concluded.

Its numbers come from an estimate from the Center on Budget and Policy Priorities that shows more than half of those cuts — a total $2.5 trillion over 10 years — will come from programs that help Americans with low or moderate incomes.

There are more than 350,000 churches, mosques, synagogues and other religious congregations in the U.S., according to the Hartford Institute for Religion Research.

Bread for the World released its analysis Wednesday (June 21) as crowds gathered in Washington, D.C., to protest the repeal of the Affordable Care Act.

The organization estimates cuts to health care alone under the American Health Care Act, the proposed replacement for the ACA, would take away $2,000 a year in services from every person living at or near the poverty line for the next 10 years.