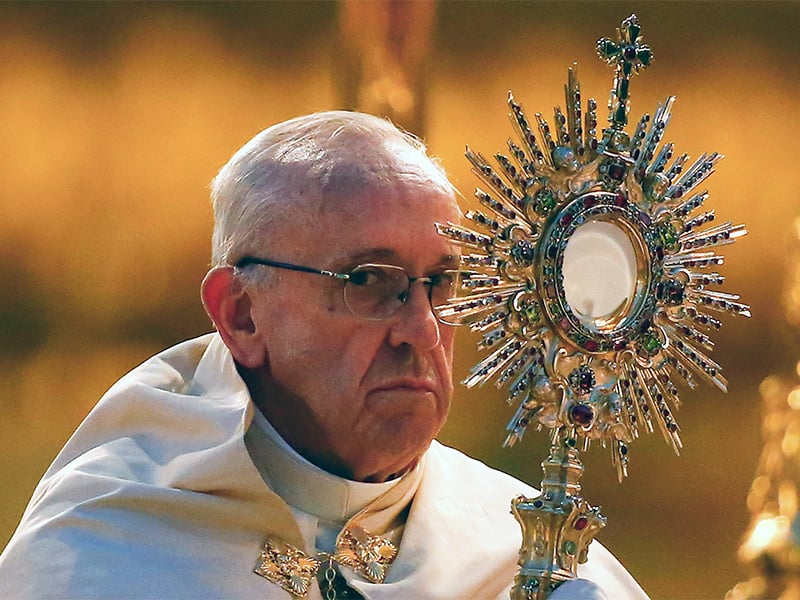 Pope Francis elevates the host as he leads the Corpus Domini procession at the Basilica of Santa Maria Maggiore in Rome on June 18, 2017. Photo courtesy of Reuters/Tony Gentile
June 28, 2017
Josephine McKenna

VATICAN CITY (RNS) Pope Francis has defrocked an Italian priest who was found guilty of child sex abuse, three years after overturning predecessor Benedict XVI's decision to do the same after allegations against the priest first came to light.

Mauro Inzoli, 67, was initially defrocked in 2012 after he was first accused of abusing minors, but Francis reversed that decision in 2014, ordering the priest to stay away from children and retire to "a life of prayer and humble discretion."

On Wednesday (June 28), the priest’s diocese of Crema in northern Italy released a statement saying the pope had made a “definitive ruling” that Inzoli, also known as Don Mauro, should be dismissed from clerical duties.

Bishop Daniele Gianotti of Crema said the Vatican body responsible for church doctrine informed him of the pope’s decision, which Gianotti described as “the worst punishment” to be imposed on a priest.

“We cannot assume that the pope made such a serious decision without carefully examining all the elements in front of God, before making a choice for the good of the church and Don Mauro,” said Gianotti on the diocese website.

Inzoli, who was also dubbed Don Mercedes because of his love of luxury cars, was found guilty last year by an Italian court of eight counts of sexual abuse of children aged 12 to 16. He reportedly paid $28,000 in compensation to five victims he molested between 2004 and 2008.

Gianotti said it had been “very painful” for him to communicate the pope’s decision to Inzoli and urged the faithful to pray for the priest’s victims.

Since Francis' election in 2013, he has adopted a hard line on pedophilia in the Catholic Church and urged bishops around the world to adopt a zero-tolerance approach to clerical sex abuse. But victims’ groups have often argued he has not done enough to hold perpetrators to account or the bishops who tolerated their behavior.

Pope Emeritus Benedict XVI first moved to defrock Inzoli but Francis decided to give him another chance before making his latest definitive ruling for something the pope has described as "a sin that shames us."

September 21, 2020
Related Posts
By Claire Giangravé
Nationalism 'must not prevail,' Pope Francis says, addressing the United Nations
By Jack Jenkins
Head of Federal Election Commission calls separation of church and state a ‘fallacy’ and 2020 election a ‘spiritual war’
By Claire Giangravé
Pope Francis’ team joins up with star athletes like Ronaldo to say: ‘We all run together’
By Yonat Shimron
Mark Galli, former Christianity Today editor and Trump critic, to be confirmed a Catholic
By Alejandra Molina
After pushback, US Navy agrees to retain contracts with civilian Catholic priests at California naval bases