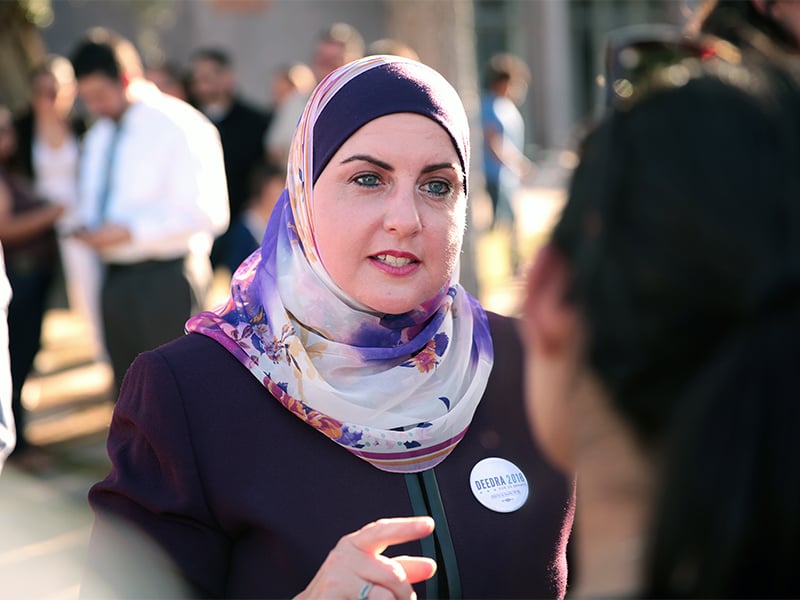 U.S. Senate candidate Deedra Abboud speaks with attendees at a campaign announcement for David Garcia for governor of Arizona at the Arizona Capitol in Phoenix on April 12, 2017. Photo courtesy of Gage Skidmore/Creative Commons
July 20, 2017
guest

A native of Little Rock, Ark. A Phoenix attorney and civil rights activist. An independent turned Democrat. A 19-year resident of Arizona who wants to represent “the state where I found my home, family and dreams.”

And, as it turns out, a few nightmares.

Deedra Abboud is also Muslim. This morning, she posted this rather innocuous piece on her Facebook page:

“Almost 250 years ago a group of dreamers came together and sketched out a revolutionary vision. No longer would they be shackled to the whims of a distant government, nor bound to the religion of an idiosyncratic king. They set out to forge their own futures, determine their own destinies, and follow their own faith. In their infinite wisdom, the Founding Fathers decreed that this nation would separate church and state, and in doing so protect both institutions. Government would be free from religious overreach, and religion would be free from government interference.”

The responses over the last 24 hours to that and to some of her other posts and videos have ranged from disturbing to just plain scary. Hundreds upon hundreds of hateful responses.

Here’s S. Jason Parr: “Nice try but your first love is Satan (AKA Allah) and your second love is to a litter box your ‘people’ come from. You are as American as Chinese checkers.”

Let’s hear from Tony Madden: “I bet you’ll be a BLAST with constituents.”

Here’s Michael Scozzari: “Vote to send them back to the sand pit, were (sic) these scumbag people belong!”

And from Vik Odinson: “I say do whatever you have to do kickstart We people of the USA to finally rise against you and your ilk.”

Because religious freedom in America is all about having the freedom to ban religions we don’t like, right?

Abboud’s spokeswoman said the candidate has been subjected to a whole lot of nasty since getting into the campaign this spring.

“We make sure to have police escorts at our events because yes, we have received a lot of hate,” said Jaclyn Freedman, via email. “We had an event at the Pomegranate Cafe that the alt-right showed up at.”

I don’t know much about Abboud, other than the fact that she converted to Islam 19 years ago and helped open the first Arizona office of the Council on American-Islamic Relations after 9/11.

I do know this. She won’t win.

The last Democrat to win a U.S. Senate seat from Arizona was Dennis DeConcini in 1988.

Still, I’d encourage you to take a look at Abboud’s Facebook page.

You won't learn much about her. The stuff she’s posted is your typical campaign feed.

But the responses — many of them from people who live outside Arizona — say quite a bit about us.

(Laurie Roberts is a metro columnist for The Republic/azcentral.com, where this post first appeared)