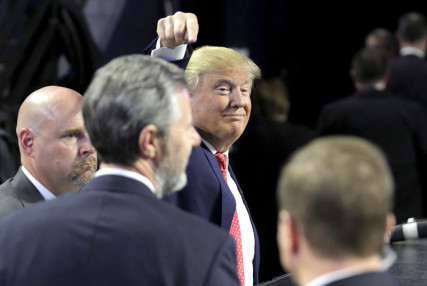 In March, evangelicals approved of the job Donald Trump was doing by a margin of two to one, 63 percent to 32 percent, according to a Politico/Daily Caller survey. Five months later, the same surveyors find that the margin has shrunk by more than half, to 56-42.

It’s important to note that Politico/Daily Caller does not separate out white evangelicals, so it’s probable that a disproportionate portion of this slippage comes from Latino evangelicals. (African-Americans don’t tend to identify themselves as evangelicals.)

Nevertheless, there’s no question that Trump’s key religious base of support has shrunk.

That 34-point swing is not only twice the size of the decline in evangelical support but also much larger than the shift against Trump among non-Christians (mostly Nones), who went from disapproving of his performance 41 percent to 53 percent in March to 31-62 in August.

It’s non-evangelical Christians who led Trump’s 24-point aggregate reversal of fortune in Politico/Daily Caller polling, from 52-43 thumbs up to 55-40 thumbs down. Thus far, the President has paid zero attention to this crucial swing religious demographic.

Not a good idea.