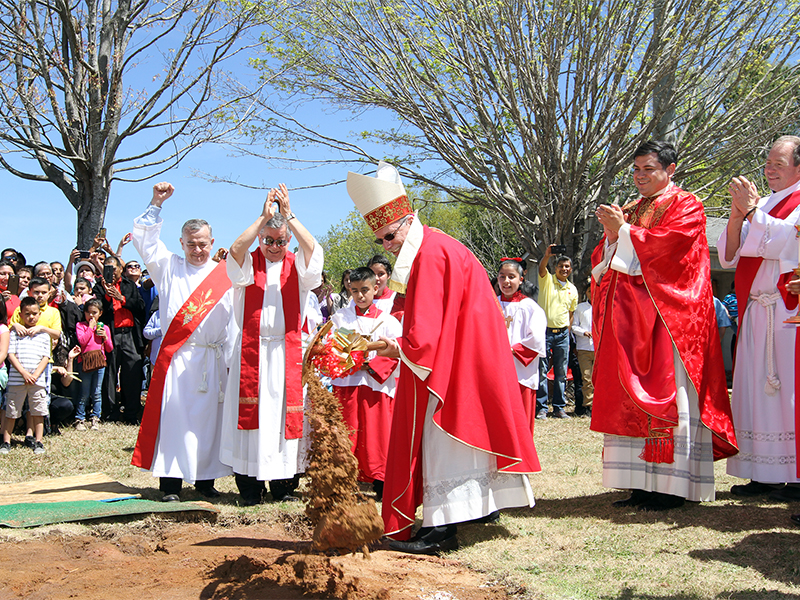 RALEIGH, N.C. (RNS) — In two weeks, Luis Rafael Zarama will be installed as bishop of the Diocese of Raleigh, at which point he will have notched two firsts: He will be the first Colombian-born bishop to lead a Roman Catholic diocese in the United States, and the state’s first Hispanic bishop.

Those twin achievements would not be so groundbreaking were it not for a simple fact: The Diocese of Raleigh has more parishioners of Hispanic heritage than of any other ethnicity. Zarama, 58, who until recently served as auxiliary bishop in the Atlanta Archdiocese, will speak their language and understand their culture in ways no U.S.-born Catholic can.

To say that Hispanics in the diocese take pride in their newly appointed bishop is an understatement.

“I never thought I’d have a Spanish-speaking bishop here in the U.S.,” said Aida Ponce de Leon, 43, an immigrant from Mexico who lives in Cary, N.C. “We can experience the love of God having someone understand what our hearts and souls are in need of.”

Zarama is not the first Latin American-born bishop to lead a U.S. diocese. There are four others — two in Texas, one in Florida and one in California. But his appointment by Pope Francis is another indication of the growth in the number of Hispanic Catholics, who now make up about 40 percent of all U.S. Catholics, as well as the growth of Catholicism in the South, which has edged out the Northeast as the region with the largest proportion of Catholics — 27 percent vs. 25 percent.

Of all the religious groups that have made North Carolina their home over the past 20 years, none have come in greater numbers than the Catholics. Demographers say the migration comes from two directions: From the North and Midwest, thousands of Catholics have come in search of high-tech jobs and warmer weather. From the South, thousands of Hispanics have come from Latin America in search of a better way of life.

But these newcomers have not always been absorbed smoothly.

“In a sense they’re welcomed but they’re separate,” said the Rev. Joseph Vetter, a retired priest and a native of North Carolina. “Something has to happen to bring us together. Having a bishop from Colombia is a big step. It will help the rest of us figure out how to work together.”

Under former Bishop Michael F. Burbidge, who has since been appointed to lead the Diocese of Arlington, Va.,  the 54-county diocese straddling eastern North Carolina took a more traditional path. Burbidge’s signature achievement was building the massive Holy Name of Jesus Cathedral, which now soars on a hilltop overlooking the city of Raleigh.

Dedicated last month, the 2,000-seat cathedral replaces an older one that held about 300. Only San Francisco, Newark, New York and Los Angeles have larger cathedrals.

A conservative, Burbidge favored the state’s recently repealed HB2 law, the controversial bathroom provision that required that people at government-run facilities use bathrooms that correspond to the gender on their birth certificate. Ordained during the papacy of St. John Paul II, he spoke passionately on issues such as abortion and contraception — often in concert with the bishop of the state’s western diocese in Charlotte.

Many hope Burbidge's successor is more in line with the current pope, who has spoken out forcefully about poverty, inequality, the environment and, of course, immigration.

The Raleigh Diocese counts 200,000 registered Catholics, but it has as many as 500,000 active Catholics, most of them Hispanics who do not formally register with the diocese.

A sizable number are undocumented; they work as farmworkers, picking cucumbers and sweet potatoes, or work in construction and landscaping. Of these, many live in constant fear of deportation, heightened by President Trump’s statements about immigration crackdowns.

That's not nearly as many Hispanic Catholics as in Texas (in Houston, the majority of Catholic priests are foreign-born) or Georgia, but it's a sign of the changes.

Two years ago, when the church held a conference, it asked the Spanish speakers to move the Mass to the gym. The Hispanics were offended.

“Father, we don’t feel welcome,” they told the Rev. John J. Granados, the parochial vicar. “We feel like the Anglo community discriminates against us.”

Granados, who is also a Colombian native, said he has worked to smooth over tensions and bridge divides.

But the diocese as a whole needs to devote more resources to its Hispanic members, he said. It lacks enough staff to help teach the catechism in Spanish, counsel couples who intend to marry, guide the youth, provide Bible studies and help new immigrants.

“We need a bishop to strengthen the Hispanic ministry in the diocese,” said Granados.

It’s not as though Hispanics have been neglected. During Burbidge’s 10 years as bishop, he brought in a dozen Spanish-speaking priests. The diocese has 12 priests from Colombia, three from Mexico and another four for whom Spanish is their first language. (Some of those are diocesan priests; others, like Granados, are on loan and will eventually return to their home countries.) All new priests are required to know enough Spanish to celebrate the Mass in that language.

But the new bishop of Raleigh is now the one who speaks English with a thick Spanish accent.

Zarama, who has lived in the U.S. for 28 years — all of them in the Atlanta region — jokes, “I speak Spanish and half English.”

The Colombian native became a U.S. citizen on July 4, 2000, and said he loves his adopted country. He served as a pastor in north Georgia for 10 years before he was tapped as vicar general, and then as auxiliary bishop for the Atlanta Archdiocese.

His co-workers describe him as caring and collaborative. Luis Capacetti, who directs the tribunal court in charge of adjudicating marriage annulments, said Zarama always reminds them they are dealing with people, not paper.

"He always tells us to take care of petitions in a very pastoral way,” said Capacetti. “He always underlines that aspect of how we work: We’re part of the healing process.”

Asked if he was a “Francis bishop,” one who takes after the pope in emphasizing a merciful, pastoral approach, Diane Starkovich, the superintendent of Catholic schools in the Atlanta Archdiocese, said: “Bishop Zarama is a kind, loving, caring individual. He cares for people dearly and always wants to be helpful and communicative and collaborative. If that describes Pope Francis, that describes him.”

Zarama, who will be installed as bishop by the man he has worked for most closely, Archbishop Wilton Gregory of Atlanta, insisted he would serve all Catholics in the Raleigh Diocese.

“My concern and my only purpose for being there is to serve the church,” Zarama said. “It doesn’t matter if they’re Anglo or Hispanic or Vietnamese or different races.”

His goal, he added, would be to unite the diocese.

For Ponce de Leon, that’s good enough, she said, adding, “He’s for all of us.”