(RNS) — Sikhs are counting on their love of “Game of Thrones” and other elements of American popular culture to help combat misperceptions of their faith that they believe have made them targets for hatred and violence.

Since April, the National Sikh Campaign has aired “We Are Sikhs” ads depicting adherents of the religion as neighbors and proud Americans on CNN, MSNBC and Fox and in the local media market of Fresno, Calif., where tens of thousands of Sikhs live. The ads also appear online and on YouTube.

“I’m obsessed with ‘Star Wars,'” says a turbaned man who appears in one of the videos. “I’ve seen every episode of ‘SpongeBob,’ because that’s what my daughters like to watch,” says another. A PTA mom, a physician and “Game of Thrones” fans also appear.

After watching ads in the $1.6 million media campaign, viewers had more positive attitudes about the monotheistic religion, which has approximately 25 million adherents worldwide.

Surveys commissioned by the organizers found that the percentage of Fresno residents who knew nothing about Sikhs dropped from 50 percent before the ads aired in June and July to 38 percent after they concluded.

Since the Sept. 11, 2001, terrorist attacks, there has been an uptick in discrimination and violence against Sikhs, including a 2012 attack in which a gunman shot six people dead and injured four others at a gurdwara, or Sikh temple, in Oak Creek, Wis. More recently, in Fresno, a store clerk was killed in 2016 and another Sikh was intentionally hit by a car in 2015.

Hart Research Associates, which conducted a survey of 501 people before the ad campaign and 502 afterward, found decreases in ignorance, especially among Republicans, older residents and whites without a college degree.

Researchers also found substantial increases in perceptions that Sikhs have American values and are patriotic.

“Across the board, despite our political differences and different backgrounds, the people come together on this issue and they have respect for us,” said Rajwant Singh, co-founder and senior adviser of the National Sikh Campaign.

He called it a “ray of hope” for the rest of the country “that understanding each other can bring this nation together while a very divided, polarized, political atmosphere is present.”

RELATED: Most Americans are clueless about Sikhs

More than half of the people who viewed the ads – 57 percent – said if they saw a man with a beard wearing a turban they would associate him with Sikhism. A 2015 survey by the same organization found that many Americans mistake Sikhs for Muslims.

Sikhism developed in North India five centuries ago, and Sikhs have lived in the U.S. for more than 100 years. Their faith’s key tenets include devotion to God, truthful living and service to others.

Researchers found that the number of respondents who said “Sikhism and Islam are separate religions” rose from 36 percent before the ads to 46 percent, with 58 percent of those who saw the ads agreeing with that statement. The percentage of people who said they personally know Sikhs increased from 32 percent to 41 percent.

“What we felt was conservative voters and heartland America, Trump supporters — that’s another whole big constituency that we need to reach out and kind of inform them who we are,” said Singh of the ads that feature the red-white-and-blue turban that is the logo for the “We Are Sikhs” campaign.

In the wake of the racial rhetoric during and after recent violence in Charlottesville, Va., “We Are Sikhs” issued a statement that declared: “What makes America great and, as President Reagan said, makes America a ‘shining city on a hill,’ is that we are a nation bounded not by race or ethnicity, but by the fundamental, self-evident truth that all men are created equal.”

Singh said the wording was not focused on President Trump, who was criticized for some of his remarks after those events.

“We just wanted to make a statement about the whole incident, not just the president’s statement,” he said.

Additional support comes from readers like you. Visit our GlobalGiving project page to support RNS’s in-depth reporting series on efforts to combat religious hatred in the U.S. 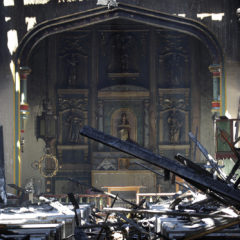