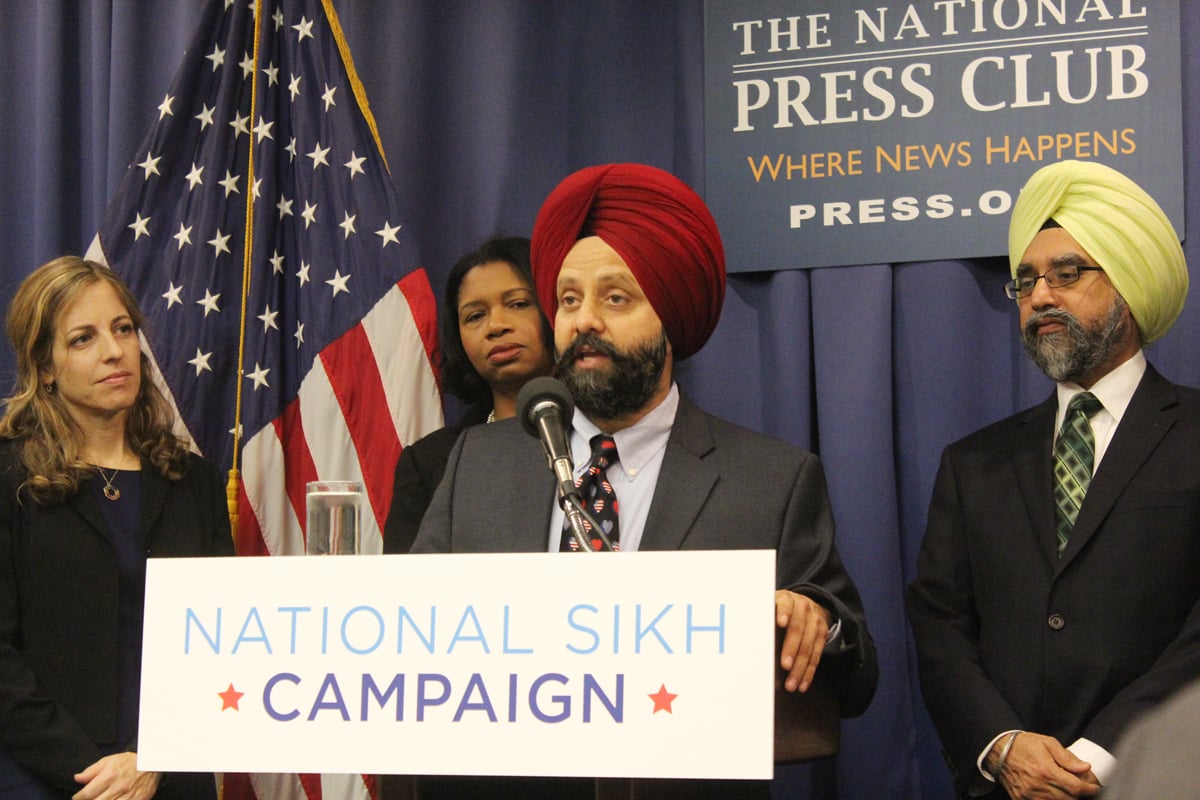 Rana Sodhi, brother of Baldir Singh Sodhi, a Sikh man who was shot and killed on Sept. 15, 2001, speaks at a news conference of the National Sikh Campaign at the National Press Club in Washington on Jan. 26, 2015. Behind him, left to right, are Rachel Laser of the Religious Action Center of Reform Judaism, the Rev. Leslie Copeland-Tune of Grace and Race Ministries, and Rajwant Singh of the National Sikh Campaign. Religion News Service photo by Adelle M. Banks

WASHINGTON (RNS) Most Americans know little or nothing about Sikhs and many mistake the turban-wearing faithful for Muslims, a new survey shows.

“We want to make sure that we pave a way for a conducive environment for our future generations so they don’t have to take off their turban to hide or to feel sorry for their identity,” said Rajwant Singh, a co-founder of the National Sikh Campaign, at a news conference Monday (Jan. 26) at the National Press Club.

When researchers at Hart Research Associates showed people taking an online survey images of Sikhs, more respondents said they were looking at Muslims than Sikhs. No one identified a woman shown without a turban as a Sikh.

Jaswant Sachdev of Phoenix, Ariz., recalled Monday how he used to be called “ayatollah” before 9/11, and was compared to Osama bin Laden after it.

“It is always the turban which causes suspicious fear in the person who has seen me for the first time,” he said, adding that people grew more comfortable with him after he talked to them and “they perceive that you are a human being like anybody else.”

The Washington–based campaign hopes to use the survey results to aid Sikhs in dispelling misperceptions about their monotheistic faith and reducing violence against its members. It recommends that Sikh gurdwaras, or houses of worship, and other organizations emphasize the faith’s focus on equality and explain the turban as an expression of their faith and values.

It has been difficult for Sikhs to communicate those values. 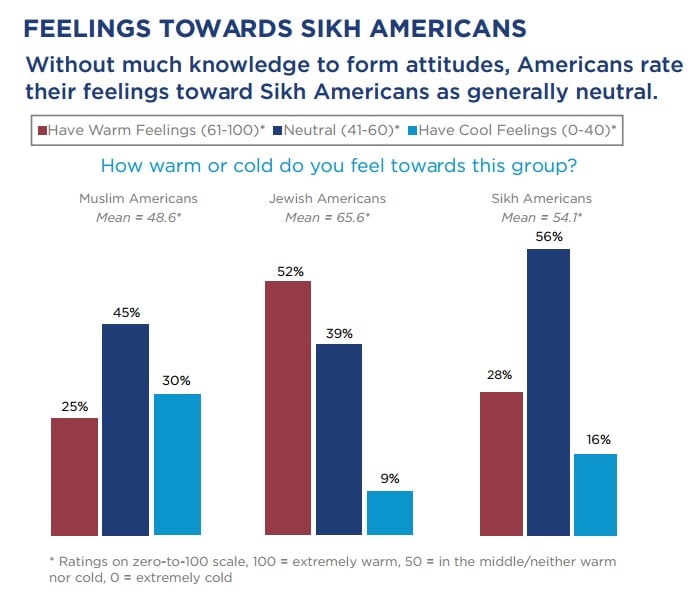 “We hold incredibly progressive values,” said Gurwin Singh Ahuja, another co-founder of the National Sikh Campaign. “Sikhs believe that men and women are equal, that all faiths should have the right to practice, and we have to do a better job of communicating those things.”

Researchers found that when survey respondents were given information about Sikh history and beliefs, their impressions grew from “neutral” to “warm.” Groups with the most significant change in views included Republicans, Hispanics and Americans ages 65 and older.

“When people learn this information, it creates a fundamental change in the way they think about Sikhs and it’s transformative,” said Geoff Garin, president of Washington-based Hart Research Associates, whose survey was conducted in August and September 2014.

Sikhism, which developed in North India five centuries ago, is the fifth-largest faith in the U.S., where Sikhs have lived for more than 100 years. Its key tenets include devotion to God, truthful living and service to others.

Earlier studies have documented mistreatment of Sikhs, including that half of Sikh students are bullied in school. A shooting at an Oak Creek, Wis., temple in 2012 that killed six was one of the deadliest acts of violence against a faith community in the U.S. since the 1963 church bombing in Birmingham, Ala. Crimes against Sikhs have increased since 9/11.

Joshua DuBois, former faith outreach adviser to President Obama, joined other Christian and Jewish leaders at the announcement of the campaign and recalled traveling to Oak Creek with first lady Michelle Obama.

“Sikhs are beautiful threads in the tapestry of this country,” said DuBois, the founder and CEO of Values Partnerships, citing their contributions to the U.S. military, the medical community and youth service projects.

“I’ve seen what happens when we don’t know the Sikh story,” he added. “I‘ve seen firsthand what happens when ignorance and bigotry reigns. But a new day is dawning in America because we’re finally getting to know our Sikh brothers and sisters.”