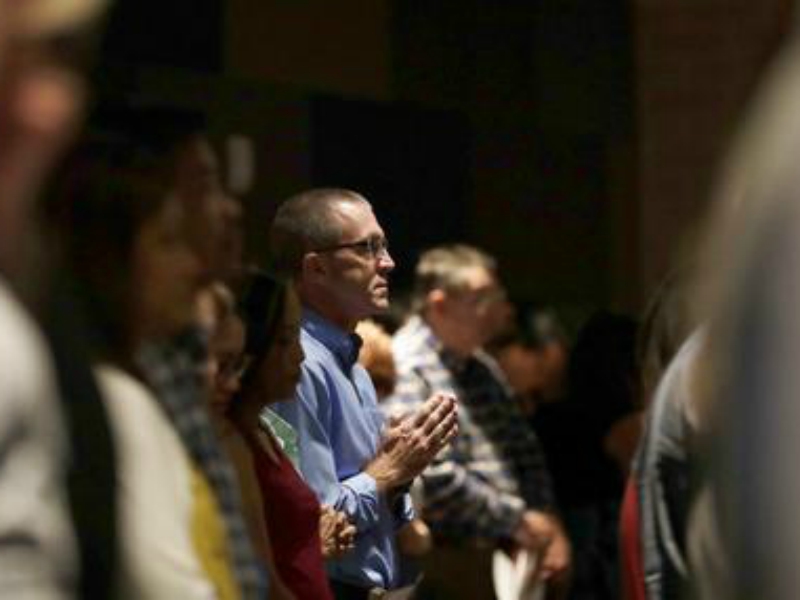 A man prays as he attends services for parishioners from flood-damaged St Ignatius Loyola Catholic Community Church in the auditorium of Klein High School Sunday, Sept. 3, 2017, in Klein, Texas. As clean up and repairs continue at the church just outside of Houston, parishioners turned this high school auditorium into their sanctuary on a Sunday that was declared National Day of Prayer for Harvey victims by President Donald Trump. (AP Photo/Gregory Bull)
September 4, 2017
Lauren Markoe

(AP) — Debris and muck were all that remained where homes once stood, tens of thousands spent the night in shelters, and others would weather another long day without safe drinking water or electricity. Yet, in churches across storm-ravaged South Texas, parishioners saw hope amid the devastation, and sought strength in faith.

Gov. Greg Abbott declared Sunday a "Day of Prayer" and urged residents to be steeled by their beliefs at a time of crisis. One Catholic congregation exiled by floodwaters held a makeshift service at a high school, another set out bug spray along with holy water, while pastors and priests talked of helping those in need and restoring a region left in shambles by Harvey.

Only days before Harvey hit, congregants at Christ United Church of Cypress, Texas, had celebrated returning to their beloved church after a long absence.

In the spring of 2016, the building had been devastated by a storm that forced the congregation to gut the historic structure and rebuild. Now, with the small brick church extensively damaged, the work must start again.

About 60 people gathered for a service Sunday at the church about 30 miles northwest of Houston, where Pastor Jeffrey Willey said he reminded his congregation that "the church is not the building. We are the church."

"We have to tear down all the walls again," he said in a telephone interview.

The church holds a significant place in the area, Willey said, its construction dating to the early 1900s. He's been buoyed by an outpouring of concern from people and other churches around the U.S., eager to help.

"We have a God that restores, that heals," he added. With faith, "we walk above the troubled waters of this earth."

At the Pine Forest Baptist Church in Vidor, Texas, along the coast about 110 miles east of Houston, 45 people gathered for a service in the parking lot, after the church was flooded in the storm.

Pat Lawrence and her fiance, Jim Frasier, arrived on a tractor after navigating the floodwaters that had left some homes cut off, like islands.

"You can't hardly comprehend all the water that's around," Lawrence said.

"My house is not flooded, but getting out is flooded. I've been in my house since last Saturday," she added. "We came on the tractor because we wanted to come to church."

A few tears were shed.

Associate Pastor Dale Prudhome told the congregants that prayer would help sustain them. After the service, he announced where supplies were being distributed, and what roads were passable.

With people around the world praying for Texas, "that's going to give you the strength to carry on," he said. "To know that your brothers and sisters are there beside you. That they're mourning with you. They're struggling on your behalf in prayer."

In Port Aransas, the Rev. Kris Bauta celebrated Mass in the darkened sanctuary of St. Joseph Catholic Church, just four blocks from the Gulf of Mexico. It was spared from the destructive storm surge by just 3 feet, suffering only a leaky roof.

As workers outside dragged toppled palm trees to the corners of the church's parking lot, the priest asked for God's blessing as "we rebuild our lives and our beautiful island."

"We will remember the destruction of this uninvited guest, but we will never stop being a people of hospitality. The peace will return," Bauta told parishioners.

At the First Baptist Church in Humble, Texas, a morning service was held for about 2,000 people in the parking lot. A pile of debris was stacked at one end of the lot, the church that was once flooded with more than 2 feet of water on the other. Hundreds of volunteers have been helping strip the building of damaged materials.

The service at Joel Osteen's Houston megachurch was filled with talk of the deadly storm and its aftermath, and the way forward.

"Harvey came, but it didn't take us out," Osteen said, after congregants listened to a live band accompanied by a light show, while many of the attendees stood and waved their arms. "We are going to come out of this stronger than before."

The televangelist and his Lakewood Church had been criticized last week on social media for not offering to shelter people driven out of their homes. The church later opened its doors for those in need.

Osteen urged those at the service and those watching online, "Don't run away from your faith, run to your faith."

He assured them, "Joy comes in the morning."