WASHINGTON (RNS) — An interfaith coalition has told the Supreme Court there is “no principled basis” for President Trump’s travel ban on Muslim-majority nations.

The group’s amicus brief, filed Sept. 5, was signed by groups such as the Muslim Public Affairs Council, the National Council of Churches, the Sikh Coalition and Catholic, Jewish and Muslim leaders.

“The Episcopal Diocese of Washington and I believe our nation’s security is imperiled, not secured, by policies that discriminate solely on the basis of religion,” Washington Bishop Mariann Edgar Budde, one of six Episcopal bishops who signed the brief, said in a statement Thursday (Sept. 14).

“I’m proud to join this interfaith effort to urge the Supreme Court to overturn the travel ban, so that visitors to the U.S. and refugees, once fully vetted, may enter the country without discrimination on the basis of religion.”

The ban temporarily prevents citizens from the following nations from entering the U.S.: Iran, Libya, Somalia, Sudan, Syria and Yemen.

The interfaith coalition members argue that Trump’s March 6 executive order is “anathema” to the core tenet of religious tolerance that they share. They say the order “selectively targeted” six Muslim-majority nations cited in State Department reports on terrorism but excluded at least two Christian-majority nations — Venezuela and the Philippines — that meet the same criteria applied to the Muslim countries.

The six nations named in President Trump’s travel ban, and the proportions of their populations that are Muslim. RNS graphic by Chris Mathews

While not contending that those two countries should be included in the ban, the coalition argues that the order violates the Constitution’s establishment clause, which calls for the government to not favor one religion over another.

Another interfaith group challenged the ban in a separate June 12 friend-of-the-court brief, arguing that it targeted Muslims and harms the ability of faith organizations to aid refugees fleeing persecution and war.

Numerous other groups also have filed briefs in the case. They range from the Eagle Forum Education and Legal Defense Fund, which argues in support of Trump and states that “aliens abroad have no constitutional rights,” to the Becket Fund for Religious Liberty, which argues that a different aspect of the Constitution — the free exercise clause — should be considered in this case. Becket’s brief is not in support of either party in the case.

On Tuesday, the high court blocked a decision by the 9th U.S. Circuit Court of Appeals that would have eased aspects of the ban and allowed the entry of tens of thousands of refugees by the end of October.

The Supreme Court has scheduled arguments related to the ban on travelers from the six countries for Oct. 10. 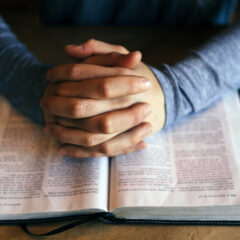