But David Meade, a Christian and self-published author of end-of-the-world survival guides, predicts doomsday is near — very near, as in this Saturday (Sept. 23).

Meade’s ideology, laid out in his book “Planet X — The 2017 Arrival,” is described by the author as “a compendium of information from every sphere—astronomical, scientific, the Book of Revelation and geopolitics.” There’s some astrology in there, too.

Meade is the latest in a very long line of American self-proclaimed prophets who claim they know when — sometimes to the hour — the biblically predicted “end times” will arrive. And while it’s fun to laugh at his belief that the “Planet Nibiru” will collide with the Earth this week, the failed prophesies of some of his predecessors have, at times, led to important religious movements or illuminating ways of thinking about faith. Let us ’Splain …

How common are predictions the end is at hand?

Very common. Wikipedia lists over 170 different religiously motivated predictions of the end of the world. The first recorded one dates back to the year 66 and ancient Judea. Since then, doomsday predictions have jumped continents, cultures and religions, but they do seem to be a mostly Protestant pastime. The first American-born doomsday dude was Cotton Mather. This son of Puritans, teenage Harvard graduate and popular New England preacher publicly proclaimed the world would end three different times, in 1697, 1716 and 1736.

If their predictions were wrong, why remember them?

Because some of the people or groups who made these failed predictions led to other important things in American religious history. Consider the Millerites, a band of 19th-century Americans who left their fields unplanted and sold their worldly goods in anticipation of their expiration date — Oct. 22, 1844. After their “Great Disappointment,” they  eventually became the Seventh-day Adventists. (Fun fact: The Millerites inspired HBO’s “The Leftovers” and even made an appearance in a couple of episodes.)

Then there were the followers of Charles Taze Russell, a 19th-century preacher who looked for Jesus’ return and the resurrection of the dead (Christians only, please) in 1878 (and again in 1914). They became Jehovah’s Witnesses, who now ring doorbells around the world (and are persecuted for it in some places — looking at you, Russia). Even John Wesley, co-founder of Methodism, dabbled in predictions, once writing that Jesus would return between 1058 and 1836 (rather a large spread as predictions go).

Some failed predictions bring unexpected insights into religion. In 1955, most people laughed when Dorothy Martin, a Chicago housewife, said aliens from Planet Clarion informed her the world would end for all but her and her small band of followers, who would be “lifted up.” No end, no lift. But social psychologist Leon Festinger developed his “theory of cognitive dissonance” from his firsthand study of Martin, and he went on to write a 1957 book that explained how rational people come to believe irrational things that is still used to explain everything from religious beliefs to real estate bubbles.

And to flat-out ignore some predictions can be perilous. Florence Houteff, considered a prophetess by the Branch Davidians, predicted April 22, 1959, as the rollout date of the Book of Revelation’s fire and brimstone. Wrong, and her group splintered in the aftermath.

One of the splinters wound up in a compound in Waco, Texas, surrounded by federal agents demanding their surrender on firearms charges. Their leader, David Koresh, was another self-proclaimed prophet who made doomsday predictions involving the deaths of his followers. Some critics felt the federal agents failed to fully understand Koresh as a religious leader, seeing him only as a con man and criminal. By the end of a 51-day siege, after a battery of gunshots and a fast-moving fire, 86 people were killed, including Koresh and several children.

Why this prediction now? Wasn’t there another big “apocalypse now” prediction a few years ago?

Scholars say doomsday predictions cluster around certain events — the Great Plague of the Middle Ages, or the “harmonic convergence” of the planets, or the year 2000. Meade has pointed to last month’s solar eclipse as a “sign” of what he says is to come. 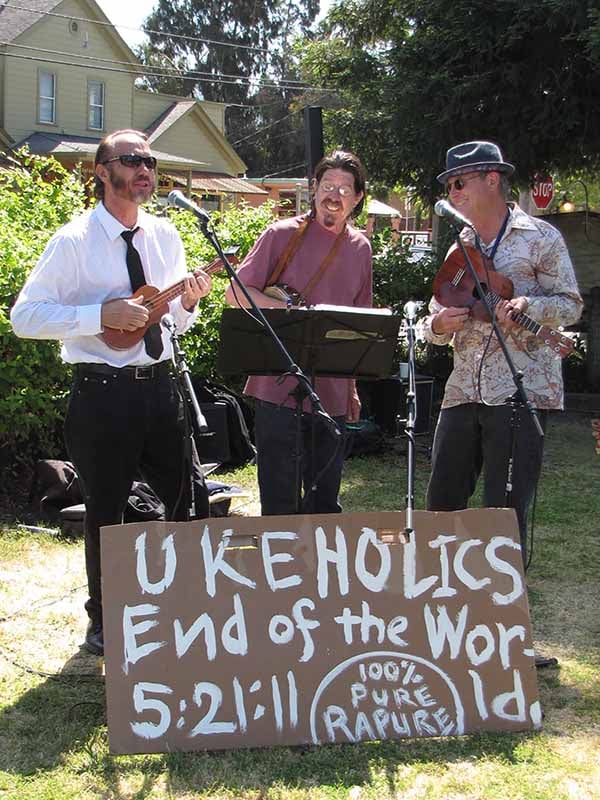 The day Harold Camping said the world would end, May 11, 2011, the “Uke Holes” played in Boonville, Calif., at a wine festival. Photo by Kimberly Winston

And yes, there has been a long string of predictions in the last two decades. Who can forget Harold Camping, the Christian radio media mogul who picked two dates in 2011, hit the airwaves, put up billboards, solicited money — and nada. He joined some rather famous names — Edgar Cayce, Sun Myung Moon, Jerry Falwell and Pat Robertson (at least twice, but before he had access to the White House) and John Hagee among them — of failed futurists. Heck, Sir Isaac Newton himself, great astronomer and mathematician, bet that Jesus would return in the year 2000.

Even the man who explained gravity was wrong. So relax. Make some weekend plans. See you Monday.

The ’Splainer (as in “You’ve got some ’splaining to do”) is an occasional feature in which the RNS staff gives you everything you need to know about current events to hold your own at the water cooler. (An earlier version of this story identified Leon Festinger as a sociologist. He was a social psychologist.)