(RNS) — Many non-Hindus are at least vaguely aware of Diwali, the Hindu holiday marked by lights, dressing up and the exchange of gifts. But some Hindus say Diwali gets overemphasized outside India because of some similarities to Christmas. (Sound familiar, Hanukkah?)

More important than Diwali is, in fact, Navaratri, which Hindus around the world are celebrating right now. What is this religious holiday, sacred to the more than 1 billion Hindus worldwide yet relatively unknown by non-Hindus, all about? Let us ’Splain …

Navaratri means “nine nights” in Sanskrit and is always celebrated near harvest time. It honors Shakti, the Hindu version of the divine feminine. Shakti takes many forms and each day of the festival is focused on one of her qualities. In some parts of India, celebrants don a different, specific, color for each day and perform different daily rituals. At night there are special Navaratri dances (called “garba” and “dandiya raas”), street processions, feasts and fun. The whole festival lasts 10 days, this year from Sept. 21-30.

Navaratri may have originated from several Hindu myths. One tells of a nine-day battle Shakti had with a demon before trouncing him on the 10th day. Another says the god Rama fasted and prayed to Shakti for nine days to win her help in defeating a 10-headed demon. He did — also on the 10th day — so the last day of Navaratri, called the “Day of Victory,” marks the triumph of good over evil.

How important is this holiday?

“It is probably the most important Indian festival you have never heard of,” Balaji Viswanathan, a writer in Karnataka, India, wrote on the website Quora. It is also, he noted, one of the few Indian holidays where women take center stage — part of the festival honors Shakti as mother, with the placement of pots and other vessels as symbolic of her womb. There are at least as many different customs and traditions associated with Navaratri as there are Indian states. (Fun fact: There are 29 Indian states.)

In western India, people dance in the streets with specially decorated batons. In Karnataka, elephants are dressed up and paraded through the streets. In south India, families arrange dozens — sometimes hundreds — of small figurines into elaborate tableaus depicting the lives of the gods. Across the country people fast, give sweets to children (like Halloween, another harvest festival), buy gold as a sign of good luck, burn demon effigies and give gifts to young girls, seen as special to Shakti.

What are the nine “faces” of Shakti?

Shakti is the source of primal energy (day one), repentance and rebirth (day two), slayer of evil (day three), creator of the universe (day four), mother of warriors (day five), daughter of wisdom (day six), the bringer of death (day seven), the giver of calmness and wisdom (day eight) and the fulfiller of wishes (day nine).

This is a derivative work of goddesses Durga, Kali and Sri Lakshmi. Photo courtesy of Sarah Welch/Wikimedia, Creative Commons

I am not Hindu and I don’t live in India. Are there Navaratri festivities I could attend here?

We could all use a little dancing in the streets and some sweets, no? There are Navaratri concerts, dance performances and cultural festivals slated for metro New York; New Jersey; Atlanta; Washington, D.C.; Chicago; Houston; Dallas; San Jose, Calif.; and more. In a sign of how integral Indians have become in the U.S., even Peoria, Ill., once the banner city for mainstream American culture, has a Navaratri festival. Its Hindu community is holding it at an Episcopal church.

If you can’t get to one near you, here’s a YouTube playlist of Navaratri songs from Bollywood — the next best thing.

RELATED: Religion can be complicated. The ‘Splainer isn’t 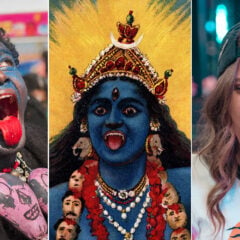