I don’t have much time for reading right now (see previous post “I can’t; I’m writing a book . . .”), but when I saw that A.J. Jacobs has a new book coming out, I took the time to read it cover to cover.

He’s one of my favorite nonfiction writers, blending humor and memoir and gee-whiz-I-never-knew-that facts about whatever crazy project he’s undertaken. That might be 365 days of biblical literalism (The Year of Living Biblically), or a quixotic attempt to read the entire Encyclopedia Britannica (The Know-It-All) or to become the world’s healthiest man (Drop Dead Healthy).

And as a bonus for Mormon readers . . . this one is all about genealogy! So I set up an interview with A.J., who greeted me with a friendly “Hi Cousin Jana!” because, as the book makes clear, we are all related. — JKR

RNS: In this book you’re on a quest to organize the world’s largest family reunion (“like Woodstock, but with more pants and antiperspirant”). What on earth were you thinking?

Jacobs: I’m not sure what I was thinking. I got one of the strangest emails ever about four years ago, and it said, “You don’t know me, but your wife is my 8th cousin.” And I thought, as you might, that he was going to ask me to wire $10,000 to a Nigerian bank, but it turns out he is one of these avid researchers who is building a gigantic family tree to link together every person on earth. And I just loved that idea.

So that was the genesis of having the Global Family Reunion, and then I began to wonder if it was overwhelming. It was a stressful, but wonderful, event. It was like organizing 100 bar mitzvahs at the same time.

RNS: There’s so much interesting stuff in the book about why it’s important to know about your ancestors, including a study that found that kids who know their family history are more resilient and happy.

Jacobs: I found that study fascinating and extremely useful. And it also gave me an excuse to talk to my kids about our ancestors, even if they were rolling their eyes. In general, I’m a huge fan of history, and it’s very good to know where we came from. But this was very specific, saying that teaching your kids about their ancestors will make them healthier and more well-adjusted.

It isn’t just that you should tell them the dates of births and deaths, but you have to tell them the stories. As a writer, I loved that. And not just any stories, but both the good and the bad. The high points and the low points, to show that nobody’s perfect, and we all have to struggle to overcome obstacles. I might have gone a little overboard telling my kids about the failures of our family, but I do try to balance it with the great things our family has accomplished.

RNS: Like with your Grandfather Kheel! His accomplishments were really impressive, and controversial enough that he had an FBI file.

Jacobs: Yeah, I was so proud of him for being investigated. I knew a good amount of what he had done, but getting access to his FBI file was amazing. I knew he had some interactions with Martin Luther King Jr, but I didn’t know the extent of it. He had fundraisers for MLK and was his lawyer. Through that my kids have a personal connection to the civil rights movement and their eyes won’t glaze over quite as much. I think MLK gave my mother and father a very nice silver bowl for their wedding. Just the fact that there is this physical object is great.

RNS: You talk with tons of celebrities in this book, like Daniel Radcliffe and George H.W. Bush. What was your favorite conversation?

Jacobs: I loved the interview with Daniel Radcliffe. First of all, he is an example of a child actor who turned out OK! So right there, that’s a lovely testament to his character. But also it’s so interesting just hearing the sacrifices that all of our ancestors made. His grandmother married a South African man who was just terrible, and he tried to have her committed to an asylum. She had to escape in the middle of the night with her child, Daniel’s mother.

And then I got the actor and hip hop star Ludacris and had a very interesting conversation with him. I was able to track down some research on him that showed he was probably descended from a Jewish man on one side. He did not know what to make of that at first: “What? Are you telling me that I’m Jewish?” But by the end of the conversation, I could tell he was excited to be part of the tribe.

In general, if you ever want to talk about something with anyone, asking about their family really is a miracle topic. Everyone has interesting family stories and everyone likes to talk about themselves. As one genealogist told me, family history is the “museum of me.” It can be egotistical. But on the other hand it’s the exact opposite because you’re learning that you are part of this wider web of thousands of cousins and hundreds of thousand of ancestors. You’re just one part of the big global family.

RNS: I wound up watching the Netflix documentary Twinsters because of what you wrote about it, and I found it so joyful to see those young women find each other. But your book also has some really painful stories about what can happen when people dig deeper to learn more about their family history.

Jacobs: There are so many joyful discoveries, but also disturbing ones. Overall, I’m a fan of truth. One story in the book is about a man who had nine siblings and they all assumed they were from the one dad, but it turned out that none of them were from the dad. First it was a shock just having all these different fathers from one family. But more than that, what I found really moving was the forgiveness in the family, like the forgiveness of the son for his mother, and also the of the dad, who loved all of these kids even though he knew none of them were his biological offspring.

So it goes to one of the main themes of the book, which is expanding our idea of the family to all these different options. As my 8th cousin Hillary Clinton has said, it takes a village to raise a child.

RNS: As a Mormon, I was of course ridiculously proud that you called us “genealogy superstars.” Thank you for that.

Jacobs: I could not have done this book without the Mormon community! They were extraordinary. One of the most extraordinary things was that they could conceivably be secretive about their data, but the fact that the LDS Church is so open with what they’ve researched is, to me, a beautiful thing. Also, I got to sing in the Mormon Tabernacle Choir! They didn’t have me on prime time, which I think was a wise decision, but I got to sing with them in a practice.

RNS: And you got to meet Donny Osmond, who is like Mormon royalty with the Purple Socks to prove it.

Jacobs: He was delightful. He was very kind to me. And I love that he’s a grandfather many times over and he looks younger than me.

I don’t like to traffic in stereotypes, but the stereotype is that Mormon people are very kind, and I found that to be true. So if you’re going to have a stereotype, that’s a good one to have.

RNS: I feel that way too. Even though I’m a flaming liberal in the eyes of many Mormons, my people would still bring me a casserole if I needed one.

Jacobs: Nothing is a monolith, and I found that to be so true with the LDS Church. As a flaming liberal myself, someone who supports gay marriage, it was great to see that there are Mormons who consider themselves faithful and good Mormons but disagree on certain issues. There’s no such thing as a monolith. There’s diversity within the Mormon community like every other community.

RNS: So are you planning another Global Family Reunion?

Jacobs: I would love to. My kids are sucking up a lot of energy right now.

RNS: What are you doing for your next book?

Jacobs: I take one of my greatest joys, which is my morning cup of coffee, and I try to track down where it came from. I went down to Columbia to thank the people who picked the beans, and everyone at every step in between: the truck driver, and even the people who made the tires and got the rubber for the tires.

The idea is that there are thousands of people involved in every little thing we do during the day. It’s the same kind of theme of this book on family history, that we are all connected. 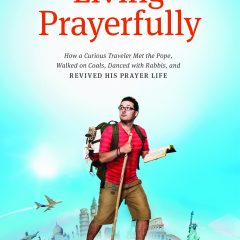 Arts & Culture
How to pray, in one year and 37,000 miles
Follow us on Facebook!
Submit your photos to RNS