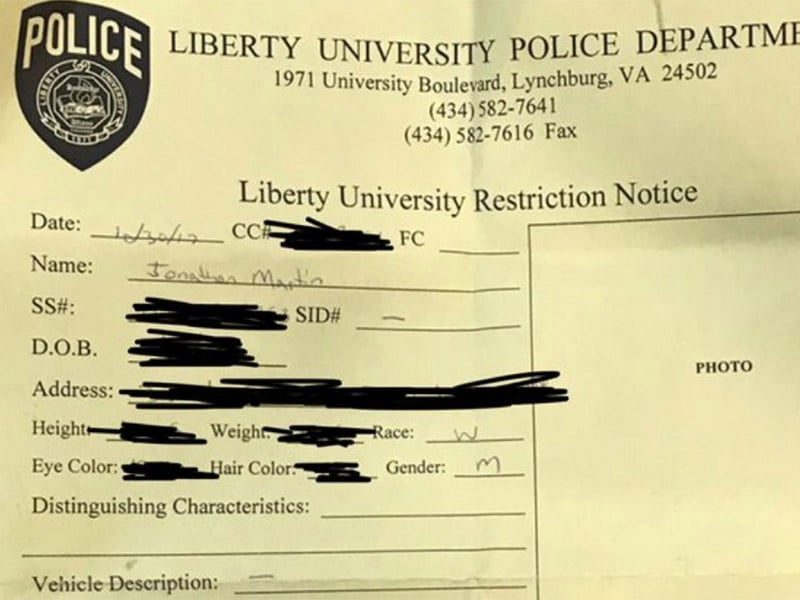 (RNS) — I went to Liberty University a few days ago for two reasons: to see my friends Johnnyswim in concert and pray with a handful of students.

These are students who have consistently expressed concern about Jerry Falwell Jr.’s support of the politics of Donald Trump and Steve Bannon, especially with regards to race and the conflation of Christianity with nationalism.

The response of the university was to send five police officers to come get me out of Johnnyswim’s greenroom on Monday night (Oct. 30) after the show, escort me outside, photograph me, and tell me I was barred from the campus for life — subject to arrest “if I ever put one foot on the property.”

Falwell openly encourages his students to carry guns, but fears public prayer from Christians who openly embrace nonviolence. A thin-skinned man like the president for whom he serves as an apologist, Falwell does not easily tolerate robust dissent.

Liberty later released a statement saying that this action was necessary because of security concerns, that a small prayer gathering we had planned for the following morning would require a permit. Sending armed police officers to remove me from a concert the night before was evidently “the only effective way to prevent the unauthorized event from happening.”

Evidently, simply telling me that I could not pray with students on campus, or that the meeting could not occur without submitting paperwork, was not considered. Removing me from Johnnyswim’s greenroom where I was a ticketed, invited guest of the band had nothing to do with stopping the prayer the next morning from happening. The move was designed to bully and intimidate, to send a message.

But this is the irony of Jerry Falwell Jr., an authoritarian leader who censors his own university's student newspaper: He shills for the president weekly in front of cameras on cable news, but when anyone criticizes or contradicts him (such as the Liberty University graduates who sent back their diplomas to protest his alignment with Trump this year), it’s “grandstanding.”

The notorious media hound dismisses any meaningful dissent as merely a plea for publicity. The unnecessary way I was removed was a stunt, but Falwell says it’s a stunt for anyone to tell about it.

Falwell himself is a master at self-generating publicity — the president of a Christian institution of higher learning defending President Trump’s “fine people on both sides” equivocation after Charlottesville or last week publicly calling for evangelicals to partner with the white nationalist Steve Bannon to oust “fake Republicans.”

His views do not represent those of many of his students or faculty, and directly harm the witness both of the Liberty University community, as well as the larger church he ostensibly represents.

The response of his administration only exposes the problematic nature of the far-right Frankenstein’s monster Falwell Jr. has helped create out of Christianity, nationalism and civil religion. And as much as he wants to, this time I don’t think the Liberty community is going to let him change the subject.

Falwell has promoted the doctrine of “America First,” instead of the Christian message of “Kingdom of God first.” He has put allegiance to a nation-state ahead of the allegiance to the kingdom of heaven that Christ taught, in which the last are first.

He has attached himself to a movement that demonizes refugees and immigrants instead of welcoming them, and has encouraged people to compartmentalize their faith from their politics in favor of the crass political pragmatism of Trump and Bannon that has no grounding in Christian faith. Instead of embracing the political implications of “Jesus is Lord,” he has embraced Trump’s politics of fear and demonization.

We have come a long way from “let-my-people-go” religion to Falwell’s “the-important-thing-is-to-be-polite-to-Pharaoh” religion. His sort of religion has all too often made the captives mannerly, whereas Jesus came to set the captives free.

What excites me now, is that Liberty students, the ones I planned to pray with — like so many Christian college students I meet across the country — are starting to rise up. The cultural earthquake that is shaking the foundations of both church and empire is actually setting them loose.

Unlike many of their fathers and mothers, they will not bow to the idols of nationalism. They will stand with Jesus, alongside those who are marginalized and oppressed.

(Jonathan Martin is a writer and speaker and founder of The Table in Tulsa, Okla. The views expressed in this opinion piece are the author's own and do not reflect those of Religion News Service, which has invited Jerry Falwell Jr. to write a response.)