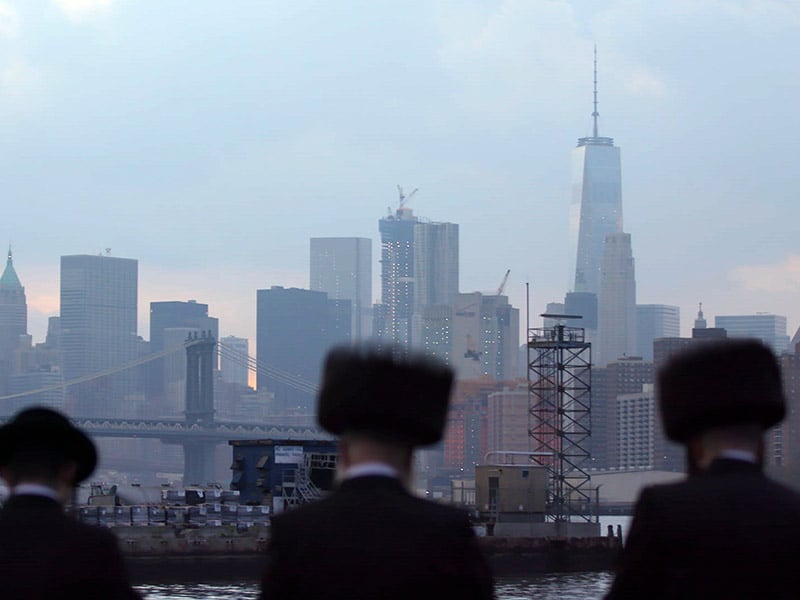 "One of Us" offers a look into the secretive world of Hasidic Judaism and those who wish to leave that community for a life among the nonreligious, whatever the costs. Photo courtesy of Netflix
November 9, 2017
Menachem Wecker

Documentarians' attempts to shed light on Hasidic groups can reveal their own — sometimes apparently willful — misconceptions about them, as an Oprah Winfrey film crew did when it toured a Hasidic group's ritual bath, or mikvah, in Brooklyn in 2012.

As the Hasidic woman leading them remembered, Oprah and her team were clad in black, while she — who was interviewed for but asked not to be named in this piece — wore white, and her daughter, burgundy.

Why, one of Oprah's producers asked the two women, do Hasidic women wear only black?

“It kind of blew my mind,” the mikvah guide said.

A new Netflix documentary, “One of Us,” also falls short in its portrayal of Hasidim, as the different groups of Hasidic Jews are collectively known. In the 95-minute film, Ari, Etty and Luzer allege abuse and discuss their struggles to leave the Hasidic lives into which they were born.

The filmmakers worked with the New York-based nonprofit Footsteps, which helps former Hasidic Jews on their journeys to more secular lives. The organization said it only assists those who ask for help, but Hasidic leaders have accused it of preying on vulnerable community members.

“One of Us” tugs on viewers’ heartstrings from the start, but many of those most familiar with Hasidim say it presents an incomplete and skewed snapshot of Hasidic life.

Estimates place Hasidim at about 350,000 in the U.S., with a 45 percent growth rate every decade. They represent about 6 percent of all self-identifying Jews in the nation, according to the Pew Research Center’s 2013 Portrait of Jewish Americans.

While "One of Us" tells the stories of three of those 350,000, here’s what the broader communities are about, according to some who have spent much more time with them.

Hasidic men tend to wear their side curls and beards long, and their headgear — from skullcaps to furry hats called shtreimels. Hasidic women wear long sleeves and dresses or skirts, and married women cover their hair, often with wigs, kerchiefs or both.

Early on in the Netflix documentary, a subtitle states, “To separate themselves from outsiders, [Hasidim] dress like their ancestors and speak mostly Yiddish.” That’s misleading, said the mikvah guide. Hasidic garb is “just traditional” and no more emphasizes difference than do traditional American Indian or African clothing, she said. And Hasidic women shop at stores like Lord & Taylor and Macy’s.

“It’s not like they’re going back to some shtetl dressmaker,” she said.

Rabbi Ysoscher Katz, of the Modern Orthodox rabbinical college Yeshivat Chovevei Torah, disagrees. Hasidim and other ultra-Orthodox Jews model their fashion choices on a religious text, which states that the Israelites in Exodus merited redemption from ancient Egypt because they didn’t change their names, language or clothing.

“That’s become almost the anthem of Orthodoxy,” said Katz, who grew up in the Satmar Hasidic community.

“We all live with restrictions. I can’t park wherever I want to park,” said the mikvah guide. She offered another example: When her daughter started taking karate lessons — yes, some Hasidic women learn karate — that meant she couldn't study piano at the same time.

“My commitment is to Torah," the guide said, speaking of the first five books of the Hebrew Bible. "I want to live a kind of life with the ideals and principles of Torah living. Part of that is the way I view myself and my body. ... I can wear whatever I want. But because I’m committed to Torah, most of my body is covered.”

The Netflix documentary frequently shows Hasidim through windows, often barred, suggesting the only way to observe this community is voyeuristically. But Hasidim don’t cloister themselves entirely, according to Katz, who recalls his father — who grew up in South America — chatting in Spanish with the Latino neighbors as he left the house for work. And his grandfather would converse in Spanish with elderly non-Jews at the park.

The two aren’t outliers, Katz said. “The community is flattered when outsiders come." Some outsiders may feel they will be shunned, "but the community is very proud to show off who they are."

4. There are many kinds of Hasidim.

Satmar, the Hasidic group in which Katz grew up, is very critical of Zionism, while Chabad is very supportive of the modern state of Israel, according to Samuel Heilman, a sociologist at Queens College in New York who has studied Hasidim.

“That’s a huge difference,” said Heilman, author of the recent book “Who Will Lead Us?: The Story of Five Hasidic Dynasties in America.”

On other issues, too, from the rabbis they follow to the places they settle, “there are tons of gradations," said Katz.

5. Not all Hasidic communities circle the wagons to blame abuse victims.

“It’s true that abuse exists," but not as universally as the Netflix documentary seems to suggest, Heilman said.

Katz acknowledged that some Hasidic leaders blame victims and protect abusers. “There’s a small and minor elite, which is deeply invested in preserving the status quo, because that’s where they get their power, their money and their control.” But among lay Hasidim, many are "far more loving, far more accepting” toward victims.

The Hasidic woman who guided Oprah through the ritual bath, and is also involved in raising sexual abuse awareness in the Hasidic community, said attitudes are changing.

"One of Us" doesn't show counterexamples, such as the case in which a young Hasidic girl accused a very powerful rabbi of abuse, she said.

“It didn’t tell you about that courtroom being packed with the supporters of the victim, and not a single supporter for the molester from his own community,” she said.

(Menachem Wecker is a freelance writer living in Washington, D.C. The views expressed in this opinion piece do not necessarily reflect those of Religion News Service.)