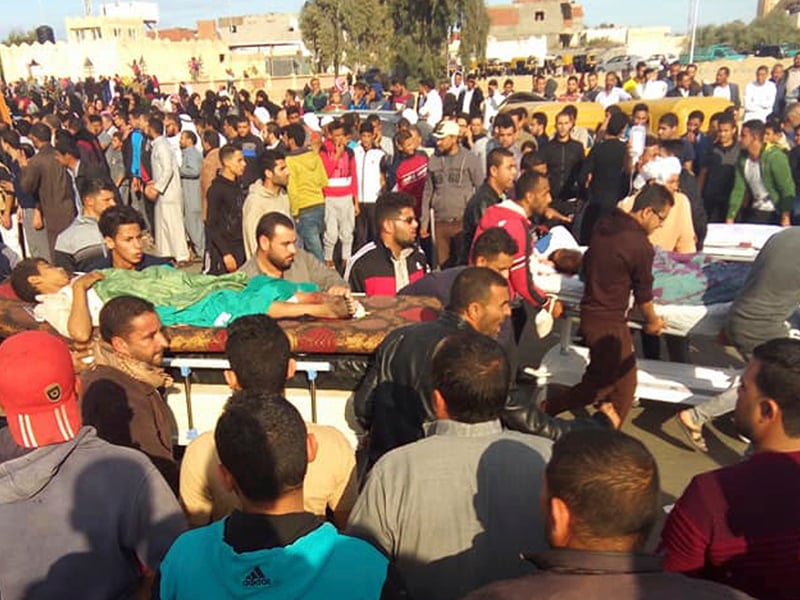 Injured people are evacuated from the scene of a militant attack on a mosque in Bir al-Abd in the northern Sinai Peninsula of Egypt on Friday, Nov. 24, 2017. In the deadliest-ever attack by Islamic extremists in Egypt, militants assaulted a crowded mosque Friday during prayers, blasting helpless worshippers with gunfire and rocket-propelled grenades and blocking their escape routes. More than 200 people were killed before the assailants got away. (AP Photo)
November 25, 2017
The Conversation

(The Conversation) — Over 200 people were killed and many more injured in an attack on a Sufi mosque in Egypt’s North Sinai region on Friday (Nov. 24). The assault began with a bomb exploding as people were finishing their Friday prayers. As people fled and ambulances arrived, militants opened gunfire on them. It is the deadliest ever attack on civilians in Egypt’s modern history.

This is not the first time a cherished Sufi site and Sufi worshipers have been the target of extremists. Earlier this year, in February, a bomb exploded at the tomb of a Sufi saint, Lal Shahbaz Qalandar, in southeastern Pakistan. In 2016, combatants of the so-called Islamic State distributed images of the supposed execution of a Sufi teacher. The same year, the Pakistani Taliban murdered a popular Sufi singer of Pakistan, Amjad Sabri. In 2010 the tomb of another Sufi saint Data Ganj Bakhsh was bombed in Pakistan.

As a scholar of Muslim and Hindu traditions, I’ve long appreciated the various and influential roles that Sufis and their tombs play in South Asian communities and many communities elsewhere in the world. From my perspective, the repercussions of the deplorable violence in Egypt and elsewhere go far beyond the scores of bodies strewn around the damaged shrine and the devastated families.

Many Muslims and non-Muslims around the globe celebrate Sufi saints and gather together for worship in their shrines. Such practices, however, do not conform to the Islamic ideologies of intolerant revivalist groups such as Islamic State. On the contrary, IS finds these practices threatening. Here’s why.

Who are the Sufis?

The origins of the word “Sufi” come from an Arabic term for wool (suf). It references the unrefined wool clothes long worn by ancient west Asian ascetics and points to a common quality ascribed to Sufis – austerity.

Commonly Muslims viewed this austerity as stemming from a sincere religious devotion that compelled the Sufi into a close, personal relationship with God, modeled on aspects of the Prophet Muhammad’s life. This often involved a more inward, contemplative focus than many other forms of Islamic practice.

In some instances, Sufis challenged contemporary norms in order to shock their Muslim neighbors into more religiously intentional lives. For example, an eighth-century female Sufi saint, known popularly as Rabia al-Adawiyya, is said to have walked through her hometown of Basra, in modern-day Iraq, with a lit torch in one hand and a bucket of water in another. When asked why, she replied that she hoped to burn down heaven and douse hell’s fire so people would – without concern for reward or punishment – love God.

Others used poetry in order to express their devotion. For example, the famous 13th-century Persian poet and Sufi leader Jalāl ad-Dīn Muhammad Rūmī relied upon themes of love and desire to communicate the yearning for a heartfelt relationship with God. Yet others, such as such as Data Ganj Bakhsh, an 11th-century Sufi, wrote dense philosophical tracts that used complicated theological arguments to explain Sufi concepts to Islamic scholars.

Many Sufis are trained in “tariqas” (brotherhoods) in which teachers carefully shape students.

This is a ritual in which practitioners deepen their relationship with God through a twirling dance intended to evoke a religious experience.

Some Sufis – men and, sometimes, women – came to gain such a reputation for their insight and miracles that they were seen to be guides and healers for the community. The miracles associated with them may have been performed in life or after death.

When some of these Sufis died, common folk came to view their tombs as places emanating “baraka,” a term connoting “blessing,” “power” and “presence.” Some devotees considered the baraka as boosting their prayers, while others considered it a miraculous energy that could be absorbed from proximity with the shrine.

For the devotees, the tombs-turned-shrines are places where God gives special attention to prayers. However, some devotees go so far as to pray for the deceased Sufi’s personal intercession.

A place of interfaith worship?

So, why do some groups like the so-called Islamic State violently oppose them?

I argue, there are two reasons: First, some Sufis – as illustrated by Rabia, the Sufi from Basra – deliberately flout the Islamic conventions of their peers, which causes many in their communities to condemn their unorthodox views and practices.

Second, many Muslims, not just militants, consider shrine devotion as superstitious and idolatrous. The popularity among Muslims and non-Muslims of tomb veneration alarms many conservative Muslims.

When a Sufi tomb grows in reputation for its miraculous powers, then an increasing number of people begin to frequent it to seek blessings. The tombs often become a gathering place for Hindus, Christians, Sikhs and people from other faiths.

In South Asia, special songs of praise – “qawwali” – are sung at these shrines that express Islamic values using the imagery of love and devotion. In other regions, other traditions of devotion have emerged, while zikr (“litany recitation”) is widely popular.

However, despite the divergent ideologies and goals that differentiate them from one another, intolerant Islamist groups such as the Taliban and the so-called Islamic State reject shrine worship as well as dancing and singing as un-Islamic (hence the Pakistani Taliban’s assassination of the world-famous qawwali singer Amjad Sabri). In their view, prayers to Sufis are idolatrous.

Sufi customs reflect a vastly underreported quality about Islamic traditions in general. While some revivalist Muslim movements such as the Wahhabis and other Salafis see only one way of being Muslim, there are others who embrace the diversity of Islamic traditions.

Many Muslims proudly defend Sufi customs such as shrine devotions because they are so integral to Muslim and non-Muslim communities, not only in South Asia but in various regions of the world. Today, about 15 percent of Egypt’s population belong to Sufi orders or practice Sufi traditions. They play crucial roles in their locale and region. For many, Sufi sites offer an Islamic expression of what it means to love God.

In fact, historically, in many regions of the world Sufis have been highly successful in adapting Islamic theologies and practices to local customs for non-Muslims. For this reason, Sufi traditions have been credited for the majority of conversions to Islam in South Asia.

It is only with the global expansion of Islamist revivalist groups in the last century that the urge to absolute conformity has become so strong and pervasive. Even so, a majority of Muslims continues to accept a diversity of Islamic practices.

Given the popularity of Sufis, it’s no wonder the so-called Islamic State objects to such models of Islamic pluralism. The ferocity of the recent attack in Egypt and possible involvement of a suicide bomber demonstrate not only the strength of beliefs in this regard, but also how influential IS and other extremists judge both the prominence and the popularity of Sufi traditions.

(Peter Gottschalk is professor of religion at Wesleyan University. This article was originally published on The Conversation)