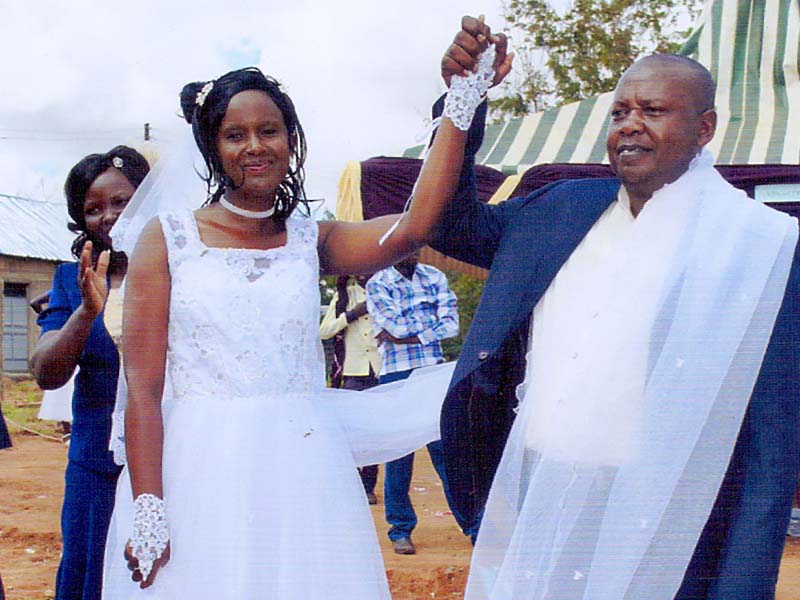 Pastor Samson Mulinge Mutuse pose for a photograph after his wedding to Evelyn Mueni at the deliverance church in Nthange, Kibwezi area on November 25. RNS photo by Fredrick Nzwili
December 1, 2017
Lauren Markoe

NTHANGE, Kenya (RNS) – They tried to burn down his church and home.

But the arson was hardly the worst of the grief Pastor Samson Mulinge Mutuse has suffered because of others' fear of AIDS.

AIDS killed his wife in 2013, and his 13-year-old daughter the next year. And when his flock found out that Mutuse himself tested positive for HIV, the virus that causes AIDS, many abandoned him — and some thought his diagnosis justified the burning of his church.

In Nthange — a small sleepy trading center about 125 miles east of the Kenyan capital where Mutuse pastors Deliverance Church — AIDS has wrecked havoc. The same is true of much of the continent. In 2016, nearly 20 million people were living with the HIV virus in Eastern and Southern Africa, representing the vast majority of people carrying the virus worldwide, according to the U.N.

As in many Kenyan towns, where Christianity and African traditional religion mix freely, people in Nthange dread the virus. Under the giant baobab trees, and in coffee and tea shops, they speak of it in whispers. Those who contract the virus face exclusion once their HIV-positive status becomes known.

But last Saturday (Nov. 25), Mutuse's wedding showed that there is a different way to treat people with HIV and AIDS. The HIV-positive Pentecostal pastor, 42, married an HIV-negative woman, 39, who had also lost a spouse to AIDS-related complications. In their courtship and marriage — and through their faith — they hope to usher in a new era of tolerance and empathy for those who carry the virus and live with AIDS.

That an HIV-negative woman would take an HIV-positive man for her husband shocked many.

"They can’t imagine this has happened. It is a community still full of stigma and discrimination,” said Mutuse during an interview on the church compound where he had wed just days before.

“People with HIV are isolated and neglected. They are also ostracized in the church and the community,” said his new bride, Evelyn Mueni Mulinge, a primary school teacher who lost her first husband to AIDS in 2006.

But her faith convinced her that she should marry Mutuse, and give him all her love and support, she said. “I was already aware of his status. I know everything about him and I am ready for it.”

Mutuse calls his new wife's HIV-negative status a blessing, and recalls the days when his first wife fell ill.

Her sickness was hard enough to bear. Then his young daughter developed AIDS. Many of his own congregants responded with rejection — and worse.

“She was in school when the teacher called to say my child had fallen ill. She died while undergoing treatment,” said Mutuse. “Her death hit me hard. I had just lost my wife and now my daughter. I had nothing left, I thought to myself.”

Soon after, there was an exodus from his church with some members of the congregation alleging he was immoral and should no longer serve as pastor of the church he helped found. Among those who remained, some ceased to give tithes and offerings.

“I realized I was being abandoned by my flock and other church officials. They did not even help me bury my daughter,” said the pastor.

Then some members of the community attempted to torch his home, which shares a building with his church, as he slept.

“It was one night after the death of my daughter, when I smelt paraffin." Peeking through a window, he saw a man strike a match. "I then heard a voice saying 'now there you are, Mr. Know Everything,'” recalled Mutuse.

The arsonist started a fire that Mutuse was quickly able to  extinguish, and was never caught. The mindset that allowed that man to strike a match against an HIV-positive pastor and his church must change, the pastor said.

To that end, he and his new wife have been speaking out about HIV and AIDS — the science behind it, how to avoid spreading the virus and how to compassionately treat those who have tested positive for HIV and are living with AIDS. He takes his message to other churches and their pastors.

Mutuse also runs what he calls a "Hope Team," which helps people struggling with AIDS  with washing and cooking, and others to start small businesses.

And he has founded the Fatherhood Initiative Network to encourage men to overcome their fears of taking an HIV test.

“I have realized that men in this region do not have knowledge about HIV. They do not know their statuses,” said the pastor, who started antiretroviral drugs in 2014 and said men more than women are likely to stigmatize people living with HIV and AIDS.

For most African men, he said, revealing that they have HIV is considered a sign of weakness.

For World AIDS Day (Dec. 1), Mutuse assembled 70 older boys from the region to speak to their peers about HIV — what it is and why it's important to get tested.

He and Mueni have also become a sort of "poster couple" for what's known as "discordant" marriages, where one spouse is HIV-positive and one HIV-negative.

“It is good to disclose to your partner one’s status and also test together. Use condoms all the time. Then seek medical advice if you want to have children,” Mutuse said.

Such couples have become a focus in the efforts to prevent the spread of AIDS — in Kenya and globally. According to the Kenya AIDS Indicator Survey 2012, about 260,000 discordant couples live in the country.

Mutuse's efforts to educate his congregation and the people around it seem to have begun to pay off.

Gradually, people have returned to the pews, though he sees about 200 from the pulpit on holidays, when he used to see 500.