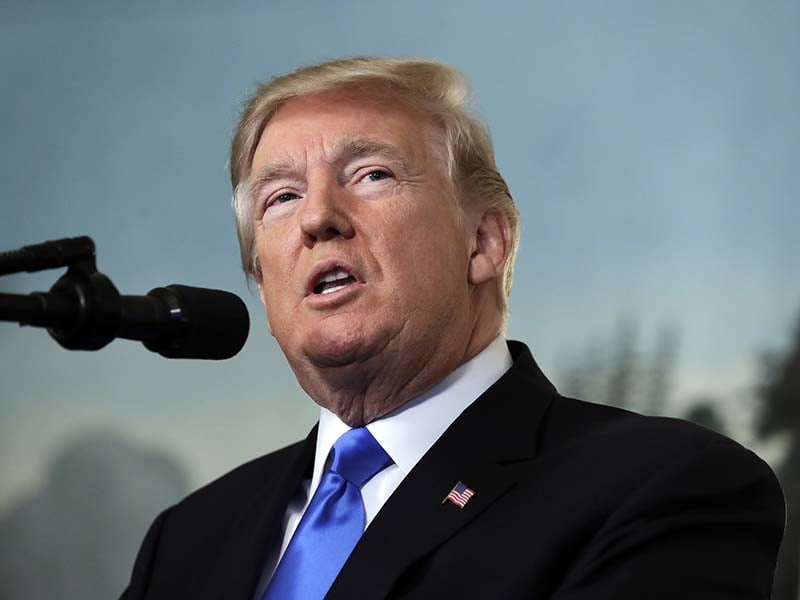 Despite urgent appeals from Arab and European leaders and the risk of anti-American protests and violence, Trump declared it was time for a new approach to Mideast peace after decades of failure. Calling Jerusalem Israel's capital, he argued, was merely recognizing the obvious.

He also said the U.S. would move its embassy from Tel Aviv to Jerusalem, though he set no timetable.

Ahead of Trump's speech, a wide array of world leaders warned that his declaration could severely damage Arab-Israeli peace prospects in a region wracked by instability. They said recognizing Israel's claims to the city, however caveated, would infuriate Muslims and potentially spark protests and violence that might further fray American alliances.

In Israel, Prime Minister Benjamin Netanyahu said his nation was "profoundly grateful" and Trump's announcement was an "important step toward peace."

However, Palestinian President Mahmoud Abbas said Wednesday that the U.S. shift "is a declaration of withdrawal from the role it has played in the peace process."

In Gaza, hundreds of Palestinian protesters burned American and Israeli flags. They also waved Palestinian flags and banners proclaiming Jerusalem as their "eternal capital," language that Israelis similarly use. Even America's closest allies in Europe questioned the wisdom of Trump's departure from the past U.S. position, which was studiously neutral over the sovereignty of the city.

"I have determined that it is time to officially recognize Jerusalem as the capital of Israel," Trump said in a White House address, calling his decision "overdue" and in America's best interests. "This is nothing more or less than the recognition of reality," he said.

Trump made no reference to signing a waiver that officials said he would sign delaying any move of the U.S. Embassy in Israel from Tel Aviv to Jerusalem. Establishing a Jerusalem embassy was a major campaign promise of Trump's and one that officials said he had focused on in discussions with top advisers in recent weeks. The waiver means there will be no embassy move for at least another six months.

Instead, Trump stressed that he directed the State Department begin the process of moving the embassy as required by U.S. law, however many years that might take. After his speech, he signed a proclamation to that effect.

The Trump administration has opted against an earlier plan of converting the existing U.S. Consulate in Jerusalem to an embassy, said a non-governmental expert on the Middle East who consults regularly with the White House. Instead, it's looking to construct an entirely new facility over the long term and a U.S. team is examining prospective sites in Jerusalem, said the individual, who wasn't authorized to disclose private conversations with U.S. officials and requested anonymity.

There was little in Trump's statement to encourage the Palestinians. Although he recited the longstanding U.S. position that Jerusalem's borders must still be worked out through negotiation, he made no recognition of the Palestinian claims to east Jerusalem. Palestinian President Mahmoud Abbas was expected to deliver a statement later Wednesday after consulting fellow Arab leaders.

While Trump for the first time endorsed the concept of an independent Palestine existing alongside Israel, even that idea appeared conditional. He said he would promote the "two-state solution" if both sides agree. Israeli Prime Minister Benjamin Netanyahu's government is dominated by hardliners who oppose Palestinian independence.

Trump's declaration of Jerusalem as Israel's capital is a powerful symbolic step. The United States has never endorsed the Jewish state's claim of sovereignty over any part of Jerusalem and has seen the city's future as indelibly linked to a comprehensive Arab-Israeli peace agreement. Trump's son-in-law, Jared Kushner, has been trying to restart a new peace process.

In making his decision, Trump overruled more cautious counsel from Secretary of State Rex Tillerson and Defense Secretary James Mattis, who expressed concern about endangering U.S. diplomats and troops in Muslim countries, according to officials briefed on internal administration deliberations. Those officials were not authorized to publicly discuss the matter and spoke on condition of anonymity.

"There will of course be disagreement and dissent regarding this announcement — but we are confident that ultimately, as we work through these disagreements, we will arrive at a place of greater understanding and cooperation," Trump said. He said he intends "to do everything in my power to help forge" a peace agreement.

Jerusalem includes the holiest ground in Judaism. It's also home to Islam's third-holiest shrine and major Christian sites, and any perceived harm to Muslim claims to the city has triggered protests in the past, in the Holy Land and beyond. On Tuesday, America's consulate in Jerusalem ordered U.S. personnel and their families to avoid visiting Jerusalem's Old City or the West Bank, and urged American citizens in general to stay away from places with increased police or military presence.

Saudi Arabia's King Salman, one of several Arab leaders to speak to Trump this week, warned the U.S. leader Tuesday that declaring Jerusalem as Israel's capital "would constitute a flagrant provocation to all Muslims, all over the world." Abbas and Jordan's King Abdullah II said they told Trump specifically not to move the embassy. British Prime Minister Theresa May said she planned to call Trump to discuss her country's support for a two-state solution.

Hanan Ashrawi, a senior Palestinian official, said Wednesday that Trump's recognition of contested Jerusalem as Israel's capital means "the peace process is finished" because Washington "has already pre-empted the outcome." Now, she said, "there is no way that there can be talks with the Americans."