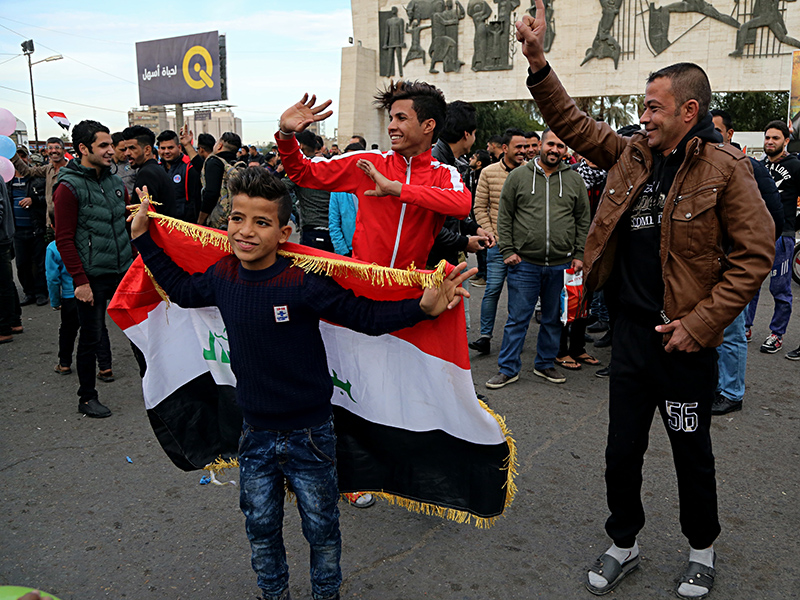 BAGHDAD (AP) — World leaders congratulated Iraq Sunday after the prime minister's declaration of victory over the Islamic State group. Saudi Arabia says the achievement is a big victory against terrorism in the region and the United Kingdom applauded Iraq's security forces "for their courage and sacrifice."

Sunday was an official holiday in Iraq. A military parade attended by al-Abadi was held inside Baghdad's fortified Green Zone — a district that houses most of Iraq's government buildings and foreign embassies. In the evening, the capital's skies filled with fireworks.

"Daesh no longer hold significant territory in Iraq or Syria," United Kingdom Prime Minister Theresa May said, according to an official statement released by her office. "This signals a new chapter towards a more peaceful, prosperous country."

Several thousand Saudis are believed to have joined the ranks of Sunni extremist groups to fight in Iraq and Syria. However, the kingdom has also been a target of multiple attacks claimed by IS and carried out by local affiliates.

The top U.S.-led coalition commander U.S. Lt. Gen. Paul E. Funk II pledged that coalition forces would continue to support Iraq after the conventional military fight against IS is concluded.

"Much work remains, and we will continue to work by, with and through our Iraqi partners to ensure the enduring defeat of Daesh and prevent its ability to threaten civilization, regionally and globally," Funk said in a statement released by the coalition Sunday. Daesh is an Arabic acronym for IS.

Iraqi forces retook the last IS strongholds in Iraq's western deserts earlier Saturday and secured the country's border with Syria.

IS fighters overran nearly a third of Iraqi territory, including Mosul, the country's second largest city, and Tikrit, the capital of Iraq's central Salahuddin province, in the summer of 2014. The following year, IS fighters also overran Anbar's provincial capital of Ramadi.

Over the past 3 ½ years, Iraqi ground forces closely backed by the U.S.-led coalition and mostly Shiite paramilitary forces backed by Iran have slowly retaken all of that territory.