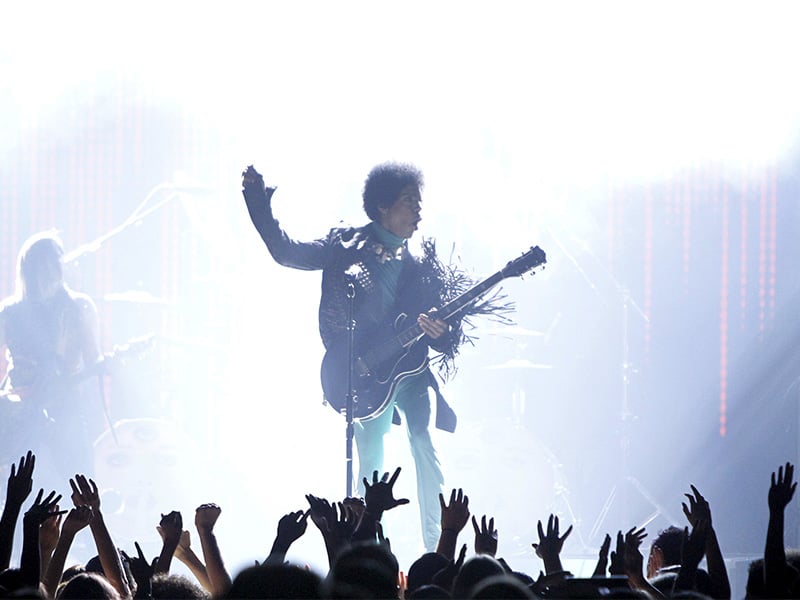 Prince performs during the Billboard Music Awards at the MGM Grand Garden Arena in Las Vegas on May 19, 2013. Photo courtesy of Reuters/Steve Marcus
December 27, 2017
Kimberly Winston

EDITORS' NOTE: As the year draws to a close, it's a time of reflection. This week, Religion News Service is proud to highlight several top stories by our staff, including this look at the late, surprisingly Christian, singer Prince on the April anniversary of his 2016 death.

(RNS) When Prince died a year ago, he was called a game changer, an iconoclast, an innovator and a sex god by critics, fellow musicians, friends and fans.

But one word lost in the grief and shock was "Christian."

Prince Rogers Nelson, whose 40 albums and 100 singles sold over 100 million records worldwide, was found dead from an overdose of painkillers in Paisley Park, his Minnesota mansion, on April 21, 2016. The 57-year-old singer, songwriter and musician created music that was as infused with his own deep faith as it was with sex.

"Every song was either a prayer or foreplay," said fashion critic Michaela Angela Davis. Either way, she added, his music made "you want to drop to your knees."

Now, amid the anniversary appreciations and concerts, Prince's faith is gaining recognition as a driving force behind his music. In January, Yale University held a three-day conference on the music of Prince and David Bowie — who also died in 2016 — that included a panel on religion and spirituality in their work.

A handful of scholars and critics are also producing books that, in part, explore the influence of faith on the music of Prince.

One of those is Ben Greenman, whose "Dig If You Will the Picture: Funk, Sex, God and Genius in the Music of Prince" was released this month. He says that in a career that spanned almost four decades, Prince's music was always concerned with religion — but what kind of religion depends on where in his career the record needle touches down.

"Early on, he came on as an iconoclast, charging hard against conventional conceptions of morality, sexuality, and spirituality, though he always straightforwardly credited God in his liner notes," Greenman said in an email. "Between (the 1984 and 1985 albums) 'Purple Rain' and 'Around the World in a Day,' he seemed to grapple with his carnal urges and to appeal to God for self-control and a better understanding of love versus lust."

Prince's early music reflects his upbringing by devout Seventh-day Adventist parents in Minneapolis. His father — also a musician — was strict. "He was so hard on me," Prince told Tavis Smiley in 2009. "I was never good enough." His parents divorced, and as a teenager Prince went to live with a neighbor.

Seventh-day Adventists are millennialists — believers in an imminent end times — and multiple Prince songs, including the hit "1999," include doomsday scenarios:

I was dreamin' when I wrote this, forgive me if it goes astray
But when I woke up this mornin', could've sworn it was judgment day
The sky was all purple, there were people runnin' everywhere
Tryin' to run from the destruction, you know I didn't even care

At the end, Prince sings, "Can't run from revelation, no."

Prince's version of the end times is not full of fear or grief. Instead, it is full of hope, joy and anticipation.

"You get to be in paradise," said Anthea Butler, an associate professor of religious studies at the University of Pennsylvania who spoke at the Yale conference. "Yes, there might be destruction, but it is also going to be a great thing. This is not a fearful thing. It is heaven or paradise."

But there was a darker, B side, too. "Sign O' the Times," released in 1987, included his most overtly Christian song to date, "The Cross," a soulful brooding on the Crucifixion:

Black day, stormy night
No love, no hope in sight
Don't cry for he is coming
Don't die without knowing the cross

Ghettos to the left of us
Flowers to the right
There'll be bread for all, y'all
If we can just, just bear the cross, yeah

Karl Jacobson, an assistant professor at Augsburg College in Prince's hometown of Minneapolis, said this song helped him better understand his own Lutheran faith. In an appreciation he wrote for the blog BibPopCult, he likened the song to Martin Luther's "theology of the cross" — the idea that the cross is all a Christian needs to know who God is.

"It tells the truth about a troubled world," Jacobson writes. " ... If we can just bear the cross — bear the truth it shows us about our world and about ourselves and about this God, and bear it with us as we live our lives, then this whole world will be kept and fed in the cross of Christ."

To Toure, who describes Prince as a preacher in some of his songs, the message is even simpler:

For Prince, where there was God there was also sex. They were two sides of the same coin, each existing only in relation to the other.

In "Controversy," from his 1981 album of the same name, Prince first confronts his androgyny ("Am I straight or gay?") and then recites the entire Lord's Prayer. A year later, in "Let's Pretend We're Married," he opens with carnal love ("let's go all night") but ends with divine love ("I'm in love with God, he's the only way").

"Darling Nikki" is so sexual as to be unquotable. When Tipper Gore heard it in 1984 on her daughter's "Purple Rain" album, she made it one of  the "Filthy Fifteen" — songs her newly formed Parents Music Resource Center found worthy of censorship.

But "Darling Nikki" also features Prince saying this phrase, recorded backward: "Hello, how are you? I’m fine ’cause I know that the Lord is coming soon."

Prince bound religion and sex in the visual, too. A poster for the 1981 album "Controversy" showed a nearly naked Prince in a shower with a crucifix, and the cover of "Lovesexy" shows a completely nude Prince with an oversized flower, its petals spread like angel wings, behind him. And when he famously dropped his name for a glyph, a mashup of the symbols for male, female and the Christian cross.

Then there's the color purple, which Prince adopted like a trademark. In many Christian churches, purple is the color of Lent, a symbol of waiting for the Resurrection.

Greenman notes that other secular artists mixed religion and sex, too — think of Madonna's "Like a Prayer" album and her sexual fetishization of the crucifix — but no one did it as consistently or as interestingly as Prince.

"He believed humans were flawed earthly beings who could participate in divine inspiration," Greenman said. "At the center of his work there was a mainspring powered by these questions of lust versus devotion, of body versus spirit, and of the difficulty of resolving this opposition."

Butler thinks Prince thought of both sex and God as transcendent experiences that led to enlightenment.

"The tendency is to listen to the sex and think that is it," she said. "But then you are missing this intricate relationship he had with both."

Susan Rogers was Prince's studio engineer between 1983 and 1987 and worked on his albums "Purple Rain," "Around the World in a Day" and "Sign O' the Times." She recalls that sexuality and religion were inseparable for Prince.

"I think he got the idea early in his youth that sex was sin," she said. But his own experience taught him that sex was beautiful.

"It was a conflicting message," she continued, one that he worked out in his songs. "In Prince’s music there was this pull between competing desires and right and wrong, so when he would express sexual desire, he would nearly always follow that up with some statement of contrition."

And what better way for an evangelical to proselytize than by linking the joy of salvation to the joy of sex?

"It’s as if Prince introduced himself to us by talking about his dirty mind," Toure wrote in The New York Times. "(A)nd once we got intrigued by him, because he’d told us how much hot sex he was having, then he said, well, now that I’ve got your attention, let me tell you about my lord and savior, Jesus Christ."

In the late 1990s, Prince suffered two tremendous setbacks — the death of his infant son and the end of his first marriage, to Mayte Garcia.

In the aftermath, Prince began talking about faith with Larry Graham, the bass guitarist for Sly and the Family Stone. Graham is a Jehovah's Witness and by 2001, Prince was too.

Later, he said, "Anything I believed then, I believe even more now – it's just expanded."

His music changed immediately. He returned to older songs and changed some of their racier lyrics. Swear words were excised. The song "The Cross" was retitled "The Christ" to reflect the fact that Witnesses reject the idea that Jesus died on a cross, believing instead that he died on a stake.

And the glyph, with its cross image, was dropped for his name.

He also made the album "The Rainbow Children," which, Greenman writes, dealt entirely with spiritual issues then on Prince's mind.

"There is a devotion to faith so comprehensive it can border on incoherence," Greenman writes. The album's Rolling Stone review called Prince "the Freak-in-the-Pulpit" for the album's focus on the religious belief, embraced by Witnesses and other conservative Christians, that wives should be subordinate to husbands.

More controversy came in a 2008 New Yorker interview. When asked about his views on gay marriage — Witnesses condemn homosexuality — Prince reportedly tapped a Bible and said, “God came to earth and saw people sticking it wherever and doing it with whatever, and he just cleared it all out. He was, like, ‘Enough.’"

The LGBTQ community, which long embraced Prince for his fearless sexuality and gender-bending image, reacted with sadness and anger. Later that year, Prince told the Los Angeles Times he felt The New Yorker quoted him out of context. He noted he never voted — Witnesses do not believe in voting — and avoided the political. "I have friends that are gay, and we study the Bible together," he said.

Like others who worked with Prince, Rogers says he was constantly in the recording studio. There is a trove of unreleased Prince music.

On Friday (April 21), a year after his death, the first morsel of that music will be released in a six-track extended play recording titled "Deliverance."

In the title track, Prince is in full preacher mode, backed by a choir, purple chords pumping from his magic guitar.

"This is not religion," he opens in his half-falsetto. But by the next verse, it is, with a "peaceable one" who brings "good news."

He closes with a promise — one that comes straight from his lifelong belief in God and one his fans may find comforting:

"Because the times are so hard to deal with, now understand — your deliverance is at hand."