(RNS) — Sulak Sivaraksa, an internationally known Buddhist social activist and scholar, is facing possible jail time for questioning the outcome of a battle fought from the backs of elephants 400 years ago.

Sivaraksa, 85, made the remarks at a Bangkok university history conference in October 2014. Referring to a 16th-century battle immortalized in Thai culture as a triumph and point of national pride, he warned academics “not to easily believe in things. Otherwise, you will fall prey to propaganda.”

Sivaraksa was arrested last October and charged with “lèse-majesté,” or defaming the monarchy, a law that bans criticizing the Thai royal family and comes with a 15-year prison sentence.

On Wednesday (Jan. 17) he will appear before a military court set to decide on whether to prosecute him. There have been more than 100 lèse-majesté arrests since 2014, according to the International Federation for Human Rights.

“In this country, myth becomes truth and I questioned the myth,” Sivaraksa told NPR. ” … The Buddha said we should speak the truth and in this country full of half-truths, I denounced the half-truths all my life.”

Thai history holds that the 16th-century battle was won by the Thai king Naresuan, who killed his Burmese prince opponent in a duel conducted on elephants. But Sivaraksa and other scholars have suggested the prince may have been killed another way, perhaps by gunfire.

The Thai military, who control the Buddhist nation, hold Naresuan as their particular hero. Questioning his victory is like questioning George Washington’s crossing of the Delaware River.

“This case reminds us how ugly it is in Thailand, where Thai authorities increasingly are using the lèse-majesté law for suppression,” James Gomez, Amnesty International’s director for Southeast Asia and the Pacific, told NPR. He called the charges against Sivaraksa “ridiculous.”

Sivaraksa, who founded the International Network of Engaged Buddhists, has aggravated Thai military authorities before but has never been jailed. Some observers think it is unlikely he will be jailed this time because he is too well-known and doing so would likely bring international censure to the country.

“If they ask me to apologize, I will never do that,” Sivaraksa told NPR. 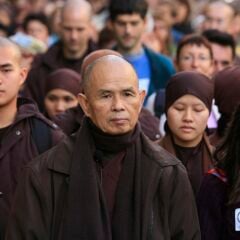