(RNS) — Christian evangelist Luis Palau, who has preached across the globe for five decades, says he has late-stage lung cancer.

“Everything is ready and if the Lord wants to take me home in the next few months or two years or whatever it is, I’m ready,” Palau, 83, said in a video recorded with his sons Kevin and Andrew and uploaded to YouTube.

The Argentine-born preacher, who moved to Oregon in his 20s and is based in the Portland area, said he noticed symptoms in November but thought they might indicate pneumonia until doctors ran tests.

“Just this week it was clearly confirmed. Stage 4 lung cancer,” he said in a statement posted Thursday (Jan. 18) on the Luis Palau Association website. “As you can imagine, this isn’t news we were expecting or hoping for. Yet our trust in the Lord remains rock solid.”

Palau said he currently feels “fine” and is full of energy and asked for prayers as he and his family face treatment decisions that he expects will limit his preaching and traveling schedule.

But he said he remains confident in the longevity of his ministry, which includes his son Kevin as president, son Andrew as an evangelist and son Keith on the development team.

Palau and his team have preached in hundreds of cities, from Washington to London to his native Buenos Aires. His ministry has put a new spin on more traditional crusades, incorporating extreme sports on the National Mall in 2005 and including concerts and service projects in a monthslong “CityFest” in New York that culminated with tens of thousands of people at a Central Park evangelistic rally in 2015.

“You have to keep constantly renovating yourself, rethinking, reapplying,” if you want to be a successful evangelist in the digital age, he told RNS before CityFest.

His ministry estimates that he has spoken to 30 million people in 75 countries. Palau, author of dozens of books, also has been featured in radio broadcasts in English and Spanish on 3,500 radio outlets in 48 countries. In November, the ministry announced plans to release a feature-length film about Palau’s life and legacy in theaters in October 2018 in North America, South America and Spain.

“And as long as I have breath (I’m praying that will be many more years) I will preach,” he said in the statement. “I will raise high the banner of biblical evangelism. I will do my part. And I’m praying you continue to do yours as well.” 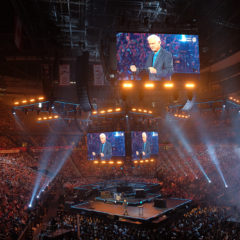 Opinion
How Ravi Zacharias changed the way evangelism is done
Follow us on Facebook!
Submit your photos to RNS