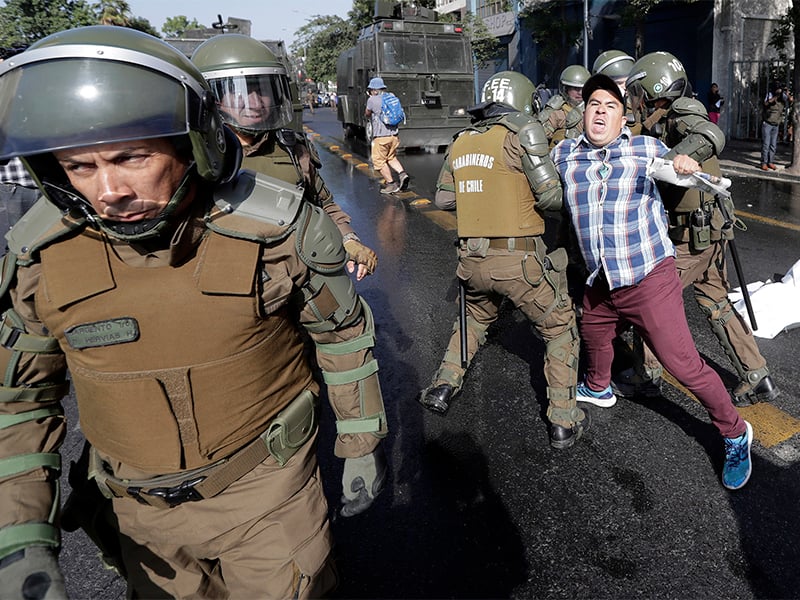 A man is detained during a protest against Pope Francis, in Santiago, Chile, on Jan. 16, 2018. Francis arrived in Chile's capital Monday night for a visit that was met with protests over sexual abuse by priests. Many Chileans are furious over Francis' 2015 decision to appoint a bishop close to the Rev. Fernando Karadima, who the Vatican found guilty in 2011 of abusing dozens of minors over decades. (AP Photo/Victor R. Caivano)
January 31, 2018
Mark Silk

The best news to come out of the Vatican since Pope Francis botched his trip to Chile is that Malta Archbishop Charles Scicluna has been dispatched to investigate. Scicluna is Rome's go-to guy when it comes to dealing seriously with sex abuse in the Church's upper reaches.

He compiled the case against Marcial Maciel Degollado, the predatory founder of the Legionaries of Christ, that resulted in Maciel's dismissal by Pope Benedict in 2005. Under Pope Francis, he took the testimony against Scottish Cardinal Keith O'Brien—who had resigned as archbishop of Edinburgh in 2013 after admitting to sexual misconduct—that led to O'Brien's renunciation of all "duties and privileges" associated with being a cardinal.

The case in Chile involves not an abuser but a bishop who stands accused of witnessing abuse and doing nothing about it.

Juan Barros Madrid was a follower of Francisco Karadima, a charismatic priest whom the Vatican defrocked in 2011 for abusing teenagers during the 1980s and 1990s. Despite accusations by several of Karadima's victims that Barros had been present for some of the abuse, Francis went ahead and appointed him bishop of the southern Chilean city of Osorno in 2015—and twice refused to accept Barros' subsequent offers to resign.

The case festered, and Francis' trip to Chile was widely seen as his opportunity to right a wrong. Instead, he celebrated Mass with Barros and called the charges against him "calumny."

The comment provoked outrage and in his in-flight press conference on the way back to Rome Francis apologized for making it—but insisted that he believed in Barros' innocence nevertheless. His determination to ignore credible evidence has baffled even his staunchest supporters.

Over at the National Catholic Reporter, Francisista Michael Sean Winters wrote, "I am gobsmacked that the pope twice declined to accept the bishop's resignation."

In the course of the now three-decade-old abuse scandal, a few bishops have left their sees under the cloud of cover-up. The late Cardinal Archbishop of Boston Bernard Law did—with the ecclesial equivalent of a golden parachute. Sans parachute, so did Bishop Robert Flynn of Kansas City and Archbishops John C. Nienstedt of St. Paul-Minneapolis and John J. Myers of Newark.

But in none of these cases did the Vatican say why prelate had to go. And that's not good enough.

Unless and until a pope says that he has removed a bishop from office for failing to deal properly with a case of sexual abuse, the Church will never be able to put the abuse scandal behind it.

Monsignor Charles Scicluna, the Vatican's top sex crimes expert, meets journalists in Rome on Feb. 8, 2012. The Vatican said Tuesday, Jan. 30, 2018, that Maltese Bishop Scicluna would travel to Chile "to listen to those who have expressed the desire to provide elements" about the case of Bishop Juan Barros, accused by abuse victims of covering up for the country's most notorious pedophile priest. (AP Photo/Gregorio Borgia)

At his press conference, the Pope said, "If a person arrives and gives me evidence, I will be the first to listen to them." There is every reason to expect that Scicluna will arrive and give evidence. Then it will be up to Francis to listen—and act.