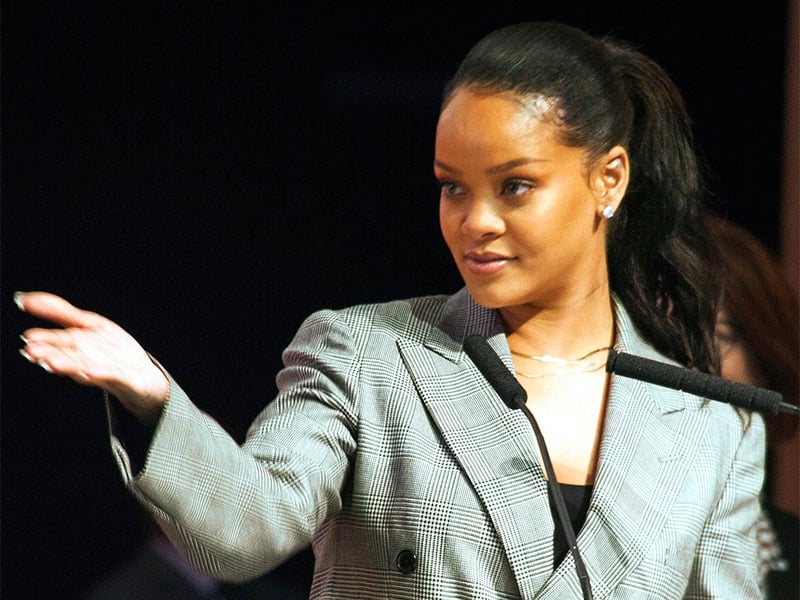 Rihanna gestures during a meeting in Dakar, Senegal, on Feb. 2, 2018. Rihanna and French President Emmanuel Macron have headlined a conference in Senegal raising hundreds of millions of dollars for education in poor countries. Cheers and whistles rang out as Rihanna was announced in the audience that included several African heads of state. (AP Photo/Mamadou Diop)
February 2, 2018
Lauren Markoe

(RNS) — Apparently believing in Internet conspiracy theories about the singer, a group of 30 hard-line Islamic organizations this week warned Rihanna to stay out of Senegal.

But Rihanna arrived in Dakar, the capital of the mostly Muslim West African country on Friday (Feb. 2), despite accusations from the group that she is a Freemason and supports gay people — both serious transgressions in their eyes.

The singer, who was born Robyn Rihanna Fenty and is originally from Barbados, scheduled her trip to Senegal to attend a conference on education funding, which French President Emmanuel Macron also attended.

The hard-line Islamic group, which calls itself  "No to Freemasonry and Homosexuality" had urged the government to cancel the visit and threatened intense protests. In response, Senegalese officials said they would assure the security of all delegates to the conference.

“We will protest right at her plane. If necessary, we will go to the assembly, the Ministry of Interior or the Presidency,” said Sheikh Oumar Diagne, a spokesman for the group, as quoted last week in the Senegalese newspaper, JeuneAfrique.

“Rihanna does not hide it. She is part of the Illuminati, which is a branch of Freemasonry,” he said in a statement.

Conspiracy theories abound on and off the Internet about the Freemasons or Masons, the world's oldest fraternal organization, which began as a guild for stonemasons in the 14th century. George Washington, Winston Churchill and John Wayne all belonged.

The Illuminati refers to secret groups — real and imagined — that trace back to a 17th-century organization founded in Europe to promote Enlightenment-era ideals and to counter corruption, superstition and the influence of religion in civic life.

According to the Senegalese group opposed to Rihanna, her visit did not coincidentally come at the same time as a planned African Freemasons meeting in Dakar. The hard-liners deemed her scheduled attendance at the education conference an attempt to divert attention from the Freemasons' gathering.

Rihanna is an ambassador for the Global Partnership for Education, a nongovernmental organization that aims to boost financing for education in 65 developing countries.

She has been working with the organization through her own charity, the Clara Lionel Foundation, which she founded in 2012 to honor her grandparents, Clara and Lionel Braithwaite.

Before Rihanna attended the education conference, Senegalese officials canceled the Free Masons event. Reports at press time have not indicated the reason, but many believe it stemmed from pressure from the hard-line Muslim group.

About 90 percent of Senegalese are Muslim. Ironic to many is that the vocal opposition to Rihanna arose in a country that enjoys a reputation for relatively high levels of tolerance.

Macron at the conference called education “the only single response” to the extremism and fundamentalism threatening the West Africa region, according to The Associated Press.

He promised 200 million euros ($248 million) for the fund, sharply upping France’s earlier offer — but falling short of the 250 million euros that Rihanna had pushed him to contribute.

Related Posts
By Abdou Kattih
In an era of disinformation we have to hold The Tennessean to a higher standard
By D.L. Mayfield
Why American evangelicals are so tempted by the easy assurance of conspiracy theories
By Tara Isabella Burton
How Americans’ ‘tell it like it is’ attitude renders us vulnerable to conspiracy theories
By Alejandra Molina
Four young people of different faiths move into a home together, then a pandemic happens
By Yonat Shimron
New research reconsiders writings of a Muslim slave and scholar