CHARLOTTESVILLE, Va. (RNS) — The regulars punch a code in the front-door lock at any hour of the day or night. Rows of hot coffeepots greet the students as they enter through the hallway. And three floors of tables, chairs, couches and sofas are available for studying or lounging.

The Center for Christian Study at the University of Virginia has been beckoning students since 1976 as a place to cram, but also as a place to  explore the relationship between faith and learning.

The WiFi is free. The library has a few desktop computers (not to mention 12,000 books). And, of course, there’s a kitchen.

Christian students come here to socialize, listen to a lecture, participate in a book study or a small group, get mentoring or counseling. Founded to serve students spiritually and intellectually, the center attests to an evangelical willingness to take on science and the liberal arts.

Like the one in Charlottesville, housed in a 1926 red-shingled house on fraternity row, less than a block from campus, these centers are each privately owned and run and funded by alumni and local Christians.

They draw hundreds of students a week and are usually staffed by half a dozen Christian educators tasked with programming and hospitality.

“It’s like my second home,” said Christy Ochs, a third-year student at UVA. “I feel like I’m welcome here and encouraged to welcome others in the name of Christ.” 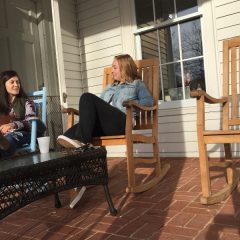 A rocking chair chat on the porch outside the North Carolina Study Center at the University of North Carolina at Chapel Hill. RNS photo by Yonat Shimron 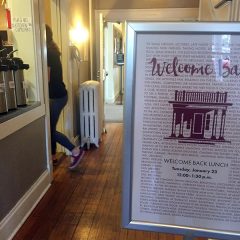 Coffee urns greet students as they enter the Center for Christian Study on the campus of the University of Virginia. RNS photo by Yonat Shimron 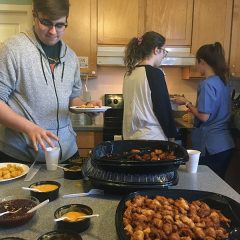 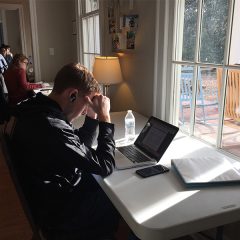 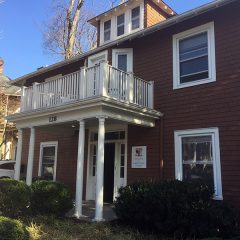 The Center for Christian Study at the University of Virginia, Charlottesville. RNS photo by Yonat Shimron 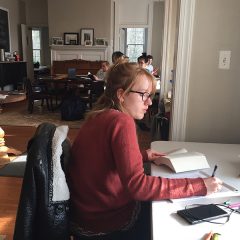 Anna Grace Freebersyser, a sophomore at the University of North Carolina at Chapel Hill, studies at the North Carolina Study Center. RNS photo by Yonat Shimron 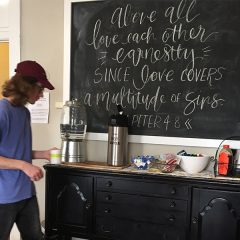 Study centers like this one at the University of North Carolina at Chapel Hill typically offer free coffee and tea in addition to free WiFi. RNS photo by Yonat Shimron 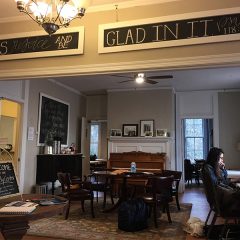 Evangelicals in particular, have long harbored misgivings about academia, viewing universities as places where faith goes to die.

Study centers, however, want to cast off the perception that evangelicals are anti-intellectual or anti-science. Protestants, after all, established most of the universities known today as the Ivy League, and these centers want to restore respect for learning and scholarship.

Though they are unambiguously evangelical in their theology, if not in their politics, study center leaders have an irenic view of the secular university.

“We love knowledge and are grateful for the ways universities disseminate knowledge and work on integrating knowledge for the betterment of society. We appreciate that,” said Drew Trotter, executive director of the Consortium of Christian Study Centers, a loose fellowship of 24 centers, based in Charlottesville. (Each study center is independent but contributes dues to the consortium.)

These evangelicals are open to science and eager to pursue a life of the mind.

At UVA, one of the most popular study center offerings is the Faith, Reason, and Science Group, which has been a long-standing partnership with the Virginia Atheists and Agnostics. Participants might reflect on a chapter from a book by evolutionary biologist and atheist Richard Dawkins one week, and by geneticist and evangelical Francis Collins the next.

The study center’s biggest event last year, drawing some 1,500 people, was a forum with Massachusetts Institute of Technology physicist Ian Hutchinson, who argues that Christianity and science can be reconciled.

This semester, it is hosting a five-week seminar on the biblical story of the binding of Isaac taught by a UVA lecturer in the Jewish Studies Program.

This emphasis on interaction with scholars is intentional. The study centers encourage students to think seriously about vocation and how they integrate their future professions with their Christian life. At the North Carolina Study Center, a conference last year brought community leaders in business and academia to talk to students about how they might live faithfully after college and contribute to the broader world.

“Universities might do a great job of teaching — here are instruments to use to flourish as an individual — without much discussion of what does that flourishing actually mean or look like,” said Madison Perry, executive director of the North Carolina Study Center. “That’s where I see a space for well-informed, traditioned voices that can say, ‘here’s what we think that means.’”

This focus on integrating faith and learning distinguishes study centers from Christian ministries on campus whose main mission is evangelism or worship. Many of these ministries, such as InterVarsity Christian Fellowship, or Cru, are membership oriented, whereas the study centers are open to all. It’s not uncommon to find Catholics, Muslims or atheists popping in and flipping open their laptops.

Christian ministries, by contrast, often struggle to find space. Since 2010, InterVarsity was stripped of its status as a recognized campus organization on several campuses because it requires student leaders to affirm a statement of faith — a violation of the schools’ “all comers” policy. Many of these ministries now rent space at study centers, which are typically off campus.

Where InterVarsity or Cru might offer a Bible study that’s mostly devotional in nature, study centers are open to exploring biblical texts within a wider body of scholarship. To that end, they might partner with university scholars.

“Part of our dream is to be a positive influence in the life of the university,” said John Terrill, director of Upper House, a Christian study center at the University of Wisconsin-Madison.

“Universities are increasingly professionalized. You’re in your silo and you’re rewarded to stay in your silo and not necessarily to look laterally. The presence of study centers can raise the game,” said Terrill, who is a member of the RNS Board of Managers.

This desire to have an influence may strike some as proof that the study centers with their evangelical credo have an ulterior motive. Not necessarily, said D. Michael Lindsay, author of “Faith in the Halls of Power,” and president of Gordon College, a nondenominational Christian college in Wenham, Mass.

One way to be more relevant has been to start literary journals of Christian thought.

A progenitor of such journals was “Wide Awake,” a magazine produced by students at UVA, and the subject of a 1995 Supreme Court case. After UVA refused to subsidize the journal, citing religion-state entanglement, students sued — and won. The Supreme Court ruled that the university could not discriminate against a religious point of view.

Wide Awake is now defunct. But other Christian journals, such as Yale’s “Logos” continue in its tradition.

Students at UNC Chapel Hill’s study center are now planning their own, called “To the Well.” The first edition will be distributed in the fall of 2018.

Parker Marshall, a sophomore at UNC, and the journal’s editor-in-chief, said he envisions mostly essays, but also some poetry and short stories. He got hooked on the study center after attending two book groups there, one on Augustine’s “Confessions,” the other on Dietrich Bonhoeffer’s “Life Together.”

“Broadly, it’s a place I can pursue Christianity in a way that engages my mind,” said Marshall, who is majoring in economics and journalism.

The Tennessee native who grew up in the Evangelical Presbyterian Church, a small mainline denomination, said he’s come to appreciate the study center as a “safe place” where students are free to think aloud. He looks forward to a panel discussion in April on the future of American evangelicalism.

Sarah Macris, a biology and religious studies undergraduate at UVA who also lives in an off-campus woman’s dormitory sponsored by the study center, said she too appreciates the spirit of open inquiry mixed with warmth at the center.

Study center regulars don’t agree on hot-button issues such as human sexuality, President Trump’s politics or the evangelical label, but she said the leaders as well as the students active in the center are committed to respecting other people’s beliefs.

“The goal isn’t to shut down discussion by how right you are,” she said. “It’s a conversation in which you love and care about one another in pursuit of truth.”