(RNS) — In the days leading up to Ash Wednesday, the centers of traditionally Catholic cities in Germany turn into huge street parties for costumed revelers on a last binge of drinking, dancing and singing before the 40 days of fasting in Lent.

The age-old Christian background to the Carnival festivities — Karneval in German — is mostly forgotten, but religion came up in a new way this year as organizers faced an interesting question. Can Jews and Muslims join in the merrymaking?

At a time of rising anti-Semitism and Islamophobia, their presence at the parades and parties would send the strong signal that they are also part of German society. But could Jews forget the way the Nazis used to ridicule them in Karneval parades during the Third Reich?

And could Muslims attend festivities where heavy beer drinking is a central part of the program?

“It’s important that we minorities in this country cooperate. Both the Jewish and the Muslim community are concerned by the growth of the far right and both face increasing xenophobia, anti-Semitism and Islamophobia.”— Dalinc Dereköy, chairman of the Düsseldorf Muslim Circle

Judging by the parades in the Rhineland on Rosenmontag (Rose Monday), the high point of the party season in the heartland of Karneval revelry, Jews found a way to show they belong.

“Right now, there is a surge in anti-Semitism in Germany,” said Michael Szentei-Heise, administrative director of the 7,000-strong Jewish community in Düsseldorf.

“You can complain about it, you can argue about it, but you can also face it with humor and say the Jewish community will have its own float in the Karneval parade,” he told Deutsche Welle television.

So for the first time in about 80 years, a Jewish group in Düsseldorf joined the local parade of Karneval clubs, marching bands and decorated floats with revelers tossing candies to the crowds along the way.

Szentei-Heise got the idea for a Jewish float last year when he saw floats poking gentle fun at Martin Luther 500 years after his 95 Theses unleashed the Protestant Reformation.

The Jewish float had the famous 19th-century writer Heinrich Heine wearing a yarmulke and prayer shawl and a sign saying “We celebrate the greatest Jewish son of our city.” Bystanders applauded as it passed.

Heine was born Jewish in Düsseldorf in 1797. Never really religious, he converted to Protestantism in 1825 in the hope of advancing a planned legal career he never had. Long ambivalent about its best-known son, Düsseldorf finally named its university after him in 1989.

Szentei-Heise said a few Jews opposed his plan and recalled the last Jewish Karneval club was founded in nearby Cologne in 1922 and barred from the parade the following year, a full decade before Adolf Hitler came to power. But the majority of the community agreed.

To give another tradition a Jewish touch, the 1.3 tons of candies tossed from the float were made in Israel and kosher, without any animal gelatin.

That also made them halal, according to Dalinc Dereköy, chairman of the Düsseldorf Muslim Circle, an association that represents the local Muslim community. He rode along in the Jewish float with Szentei-Heise and Joachim Stamp, a Protestant who is the minister for integration in North Rhine-Westphalia state.

Dereköy and Szentei-Heise are friends and have worked together in projects against far-right groups in the city.

“It’s important that we minorities in this country cooperate. Both the Jewish and the Muslim community are concerned by the growth of the far right and both face increasing xenophobia, anti-Semitism and Islamophobia,” Dereköy said.

But participation is more complicated for stricter followers of his faith.

“Believing Muslims have problems with the Karneval because using alcohol causes problems for them,” he said.

Muslim community leaders had long discussions about joining the parade, he said, but finally agreed it would help more than harm their image.

Several other local groups, including the Catholic charity network Caritas, have tried to get some of the Muslim migrants who arrived in waves in recent years to don red noses and silly wigs to join in.

Some have distributed Arabic-language flyers in refugee hostels explaining why revelers dressed as clowns and assuring them that the guns they saw in parades were fakes.

But the scenes of public drunkenness and open flirting between men and women are quite foreign to newcomers from Syria, Iraq or Afghanistan, as is the unofficial anthem of the Cologne Karneval called “Have a drink with me.” 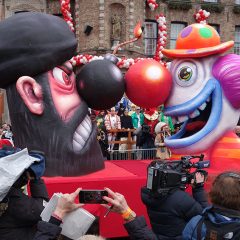 A float, co-designed by Jacques Tilly, in front of the Düsseldorf Town Hall, made a religious statement about Karneval opposing Islamist violence during the March 2016 Düsseldorf Karneval. Photo courtesy of Creative Commons 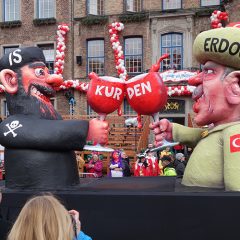 A float, co-designed by Jacques Tilly, in front of the Düsseldorf Town Hall, made a political and religious statement insinuating that the Islamic State group and Turkey joined forces against the Kurds, during the March 2016 Düsseldorf Karneval. Photo courtesy of Creative Commons 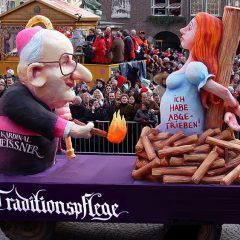 A float, co-designed by Jacques Tilly, critiques German Cardinal Meissner during Karneval in Düsseldorf in 2005. Photo courtesy of Creative Commons 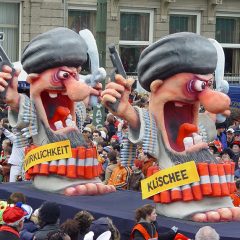 A float, co-designed by Jacques Tilly, depicts the stereotype and reality of suicide attackers, during Karneval in Düsseldorf in 2007. Photo courtesy of Creative Commons

Some local police forces have warned against groups of foreign-looking men turning up at festivities and worrying the guests. Security has been reinforced in recent years after Germany saw several attacks by radical Islamists.

After radical Muslims attacked the French satirical magazine Charlie Hebdo in November 2015, one Karneval group in Cologne planned a float showing a clown destroying a terrorist’s gun with a pencil. The plan was dropped out of fear of an attack.

Heiner Koch, a Rhinelander who is now the Catholic archbishop of Berlin, said Muslim leaders had told him they felt insulted by the biting satire that dominates the slapstick speeches at Karneval parties.

“They’re amazed how little these people realize that satire can be a form of violence that hurts them, their spirituality, their view of God and the way they pray,” he said.

Although most session orators carefully avoided Islam and Muslims this year, a state politician in Hesse used his speech to make fun of asylum-seekers who claim to be under 18 — and claim better benefits — when they clearly aren’t. Someone in the audience posted the video online and the politician was roundly criticized.

But one group that has taken up the tradition with zest is a comedy troupe made up of foreign-born Cologne residents called the “Immis” (for immigrants). They have been producing a month of cabaretlike Karneval parties every year since 2010.

They take on religions and laugh at Muslim leaders, but do it before paying audiences rather than outside during the public parades. The 20 members come from eight different countries and their motto is: “Every fool comes from elsewhere.”