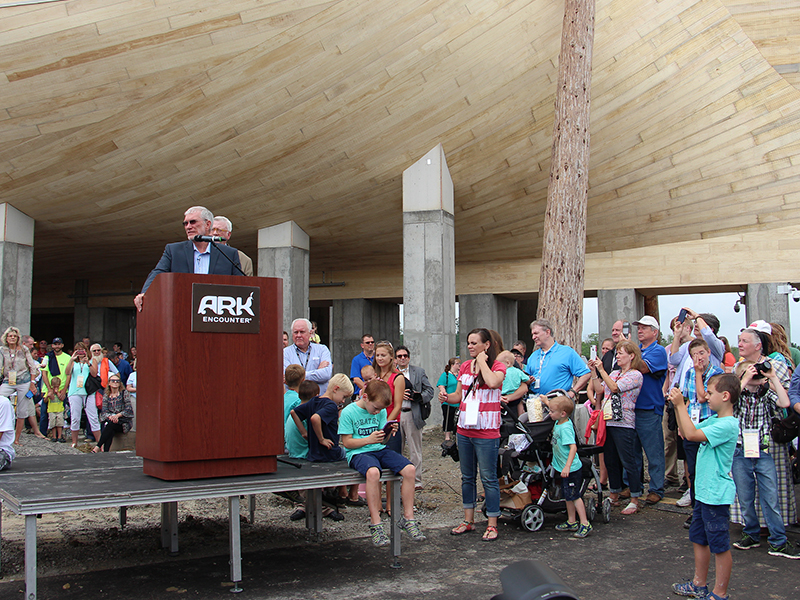 Answers in Genesis President and co-founder Ken Ham speaks during a press conference, ringed by supporters, before a ribbon-cutting event at the foot of the full-scale Noah's Ark replica at the Ark Encounter on July 5, 2016, in Williamstown, Ky. RNS photo by Emily McFarlan Miller
February 15, 2018
Emily McFarlan Miller

EDMOND, Okla. (AP) — The founder of a Kentucky creationism museum will appear at an Oklahoma university, after all, after the student body president initially canceled the event over objections of female and LGBTQ students and their supporters.

Creation Museum founder Ken Ham and the University of Central Oklahoma announced Thursday that the event will happen March 5, as planned.

Australia-born Ham had criticized the cancellation of his appearance, saying it was a denial of his right to free speech.

UCO's student body president said he had felt "bullied" during a meeting with female and LGBTQ students and supporters who object to Ham's appearance because of things he has said about women and gay people. One of those students said no one was bullied and that the group objected to student fees paying for the event.

UCO is in Edmond, about 15 miles north of Oklahoma City.

Related Posts
By Yonat Shimron
Religious conservatives look to the next Supreme Court rulings on religious liberty
By Mark Silk
Measuring the religious significance of the Supreme Court's LGBT decision
By Emily McFarlan Miller
What Ministers, Rabbis and Imams Preached This Weekend About the George Floyd Protests
By Andre Henry
When Christians won’t acknowledge racism, protest becomes church
By Emily McFarlan Miller
‘The church will not be silent’: Clergy lead thousands in peaceful protest on Chicago’s South Side