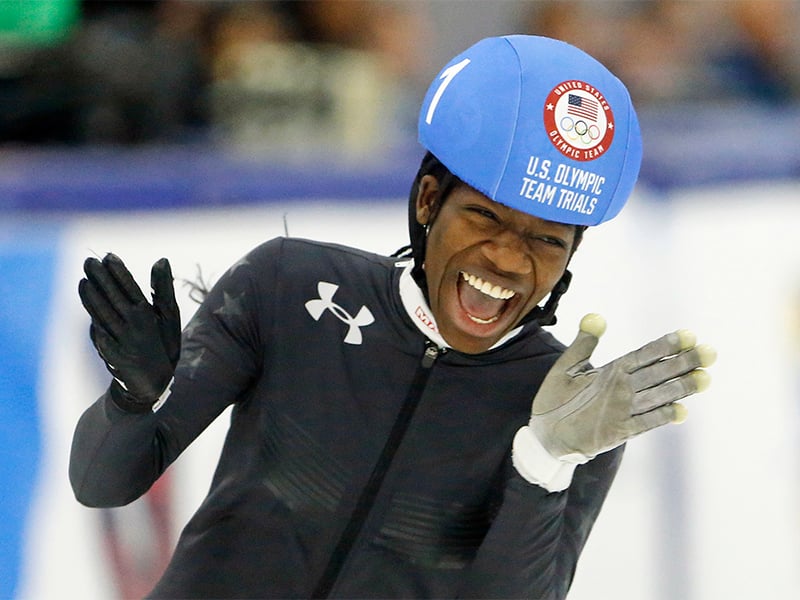 (RNS) — U.S. speedskater Maame Biney, just-turned 18, has a smile that can light up any room, a giggle that has charmed Olympic audiences and a joy that her coaches say has carried her so far in her athletic career at such a young age.

But, Biney explained in her Instagram profile, that smile "doesn't mean my life is perfect."

"It means I appreciate what I have and what God has blessed me with."

Biney already has made history as the first black woman to qualify for a U.S. Olympic speedskating team.

Her trademark smile faltered for a moment early Tuesday (Feb. 13) when she was eliminated from the quarterfinals in the 500m race, her best event. But she still has the 1500m race ahead later this week and, she said, "I just have to wait four more years to be able to get back into this big stage. I can’t wait."

Biney was born in Ghana, where her mother and brother still live, and she started skating at age 5 when her dad, Kweku Biney, pointed out a roadside sign for a "learn to skate" event when she first visited him in suburban Washington, D.C. An instructor suggested Biney was too fast for figure skating and should try speedskating instead, according to The Washington Post.

With the Olympics in sight, she moved seven months ago to Salt Lake City, where the U.S. national team trains and where she lives with a host family while finishing her senior year of high school.

Her breakout came in December at the Olympic trials, when she dominated both 500m races — and cheered so hard after her win that she fell down on the ice laughing.

What a weekend!! I’m still in awe that I’m going to the Olympics?!! I want to start off by thanking God. I am so sure that none of this would have happened if it wasn’t for him. If God hadn’t given my dad the strength to wake up, and take me to practice, I wouldn’t be here today. I also want to thank God for giving me the passion to do this??. Daddy. I know that I can be a pain at times and not appreciate what you’ve done for me. I do appreciate you. When I’m older I want to be just like you. Wanting to help people, having an amazing heart, being dedicated, and being the best parent ever. Scratching the surface to any one of those things would already make me a great person. Thank you for letting me push myself, Werid, right? But it worked. And b/c of you, I will keep pushing myself. Hehe I love you Daddy❤ This one is to my host family. Letting me stay with you guys for 6 months have been amazing! You guys have really made me feel like part of your family! Mrs. Melissa, you really have been a mother to me and I will forever love you and keep you close to my heart. Mr. Robert, hehe thank you for those Cafe Rio trips?And Abby. I’m so happy that I’ve been able to become your big sister. Love you guys always and forever? This one goes out to the whole skating community! You guys have made a huge impact on my dad and I. @dominionspeedskating I love you guys tons! We’ve been through so much together. Tears, laughter, and everything in between. I honestly can’t thank everyone who has helped us b/c there’s SOO many people. You guys know who you are?much love? This last one is to my friends (from school) who got that I couldn't do anything b/c I had a goal. I’m so happy that you guys didn’t abandon me?. I love how you guys tried to understand. It really means a lot to me?. Also, to my church family for praying for me for years!! Without your prayers for safe travels and successful competitions I honestly don’t believe that my dad and I would have made it this far? It’s been an amazing journey and I can’t wait to see what happens!! Hehe I’m super excited to go to PyeongChang, Korea and represent USA with the rest of the team?????!!

Afterward, she posted on Instagram, "I want to start off by thanking God. I am so sure that none of this would have happened if it wasn’t for him. ... I also want to thank God for giving me the passion to do this."

She also thanked her friends, her fellow skaters, her host family, her dad — and God again, for giving her dad the strength to wake up and drive her to practice for years. And she thanked her "church family," though she didn't mention to which church or denomination she belongs.

"Without your prayers for safe travels and successful competitions I honestly don’t believe that my dad and I would have made it this far," she wrote.