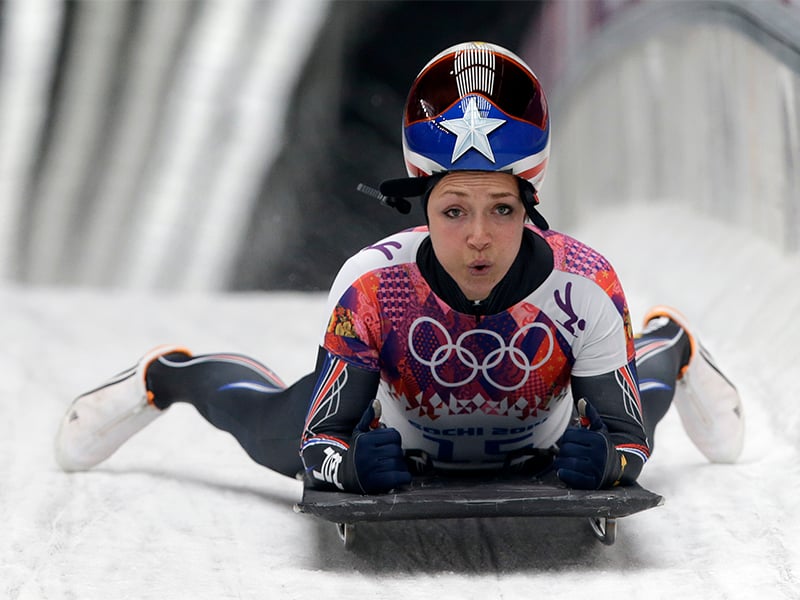 Katie Uhlaender, of the United States, brakes after her final run during the women's skeleton competition at the 2014 Winter Olympics in Krasnaya Polyana, Russia, on Feb. 14, 2014. Uhlaender finished fourth in the women's skeleton competition at the Sochi Olympics. One of the people who beat her was a Russian slider implicated in that nation's government-sponsored doping scandal. (AP Photo/Dita Alangkara, File)
February 15, 2018
Emily McFarlan Miller

Neither has her frustration over the reversal of an International Olympic Committee decision to ban 28 Russian athletes and strip them of their Sochi medals amid evidence of widespread doping — a turn of events that denied her a bronze medal.

These setbacks — and the death of her father — may have challenged her Christian faith, she said. But they did not shake it loose.

"Quitting is never an option, so why would I quit on God? He guides me and gives me the strength to keep going," she told Christian Sports Journal.

Uhlaender makes her first run of the 2018 Winter Olympics on Friday (Feb. 16) in skeleton, the sliding sport in which athletes speed down an icy track face first.

The 33-year-old Coloradan was raised an athlete by her father, Major League Baseball pitcher Ted Uhlaender. She was skiing at 18 months, and she competed in the U.S. Olympic weightlifting trials before the 2012 Summer Games in London, according to NBC.

Finished the last race of the season! With 3 runs!! #crazy not the result I was hoping for, but grateful to be back with no issues with my hamstring!! Hoping to get fit the next few weeks to prep for the #olympics and throw down #korea Could not have made it here without #God and the support of @neurollfe and #frisbiewheatandhereford #farms thank you to all that have helped me, and we are 20 days to opening ceremonies!!!! #countdown PS great commentary by @martinhaven and @west_greg

She also was raised in church. She went to services with her grandmother while visiting her in Texas, she told CSJ, though she did not name a specific church or denomination. Later, she started to go "on my own as many days as I could because the church youth groups were a ton of fun for me."

"The Lord plays a huge role in my life. I am on the path He wants me to be on," she said.

Her faith was both challenged and strengthened by her father's death from a heart attack in 2009. She knew everything that happened, good or bad, was part of God's plan, she told CSJ, but that didn't mean she wasn't upset.

She also turned to God when she learned after arriving in South Korea that the Court of Arbitration for Sport had overturned the IOC's decision to strip Russian athletes of their medals from the 2014 Winter Olympics in Sochi.

She finished fourth in skeleton at the Sochi Games, just four-hundredths of a second behind Russia’s Elena Nikitina. Briefly, it looked like the bronze medal would be Uhlaender's. That changed with the court's reversal.

"There is a lot of emotion in just seeing something so unjust happen," she told The Washington Post.