(RNS) — The headlines, alerts and tweets appeared on my screen — again. Another school shooting. The 30th U.S. mass shooting this year alone. And it’s only February.

“The Lord will save me,” the man said as the water rose above his knees, his chest, and then his head. After the man died, he asked God: “Where were you? Why didn’t you save me?”

God replied, “I sent you a bus, a boat and a helicopter.”

Prayer is important. But as people of faith, we are called to be in an active relationship with each other and with God.

Around the world, Christians are entering into the season of Lent — a 40-day period in which we struggle with our doubts and our humanity. It’s an intentional time of acknowledging that we’re not perfect and confronting our failures.

As a part of marking the season of repentance, some fast or give up a particular food. Others refrain from social media or cursing. Still others opt to participate in a new Bible study or take up a new spiritual discipline.

It’s a time of prayer, but it’s also a time of action.

We are a people of active faith. Jesus did not simply call us to believe but to go into the world.

In fact, Scripture explicitly reminds us that faith without works isn’t much. “Claiming to have faith can’t save anyone, can it? Imagine a brother or sister who is naked and never has enough food to eat. What if one of you said, “Go in peace! Stay warm! Have a nice meal!”? What good is it if you don’t actually give them what their body needs? In the same way, faith is dead when it doesn’t result in faithful activity.” (James 2:14-17)

More than 90 people are killed by gun violence every day in this country. We must act.

People in America are 25 times more likely to be murdered with a gun than people in other developed countries. We must act.

Certainly, acting includes legislative changes, but it also means teaching our children how to relate to one another. It requires a fundamental cultural shift in how we understand community, our humanity, and how rigid gender norms endanger our children.

It requires actively living out our call to love our neighbor and care for the least among us.

The challenge before us this Lenten season, therefore, is not whether we can avoid chocolate or uttering a four-letter word.

Rather, it’s whether we can finally say that not one more person will be lost to gun violence and mean it. Can we look at ourselves in the mirror and truly not feel a sense of complicity in the mounting death toll? What are we going to do after we say “Amen”?

Thoughts and prayers are not enough and will never be enough.

(Shannon Craig Straw is a senior director at West End Strategy Team, where she works with foundations, faith-based nonprofits and advocacy organizations. She lives in the Chicago area with her family and attends Urban Village Church. The views expressed in this opinion piece do not necessarily reflect those of Religion News Service.) 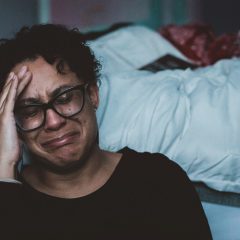 Faith
God did not give Americans guns. To say otherwise is heresy.
Follow us on Facebook!
Submit your photos to RNS