Those who knew the evangelist, who died Wednesday (Feb. 21) at age 99, say Graham’s sometimes daring innovations were guided by the simple motivation to remain faithful to a divine message and proclaim it in the most effective way possible.

Graham, when his ministry was still young, understood that Americans get their information from a multiplicity of sources,” said Frank Wright, former president of the Washington-based National Religious Broadcasters. The evangelist was “generally wise in recognizing that the way to have the greatest reach is to use every medium available rather than just focus in on one to the exclusion of others.”

Graham made his initial foray into mass communications in America’s first electronic medium — radio. His first show was “Songs in the Night,” beamed across the Midwest in the 1940s over 50,000-watt Chicago station WCFL.

In 1950, Graham launched the “Hour of Decision,” a national radio program he would subsequently appear on for more than half a century. Originating live from a crusade in Atlanta, the first show was introduced by musician and announcer Cliff Barrows, who worked with Graham on the program for decades.

Interviewed shortly before Graham’s New York crusade in June 2005, Barrows said Graham’s radio techniques changed with the times. In the early days, the program was live. Later, Barrows carried a recorder with him, capturing Graham’s voice in such remote places as the pyramids of Egypt and the Olympic stadium in Moscow. Between exotic locales, Barrows said, he would travel to Graham’s North Carolina mountain home to record the evangelist’s message.

While Graham began with radio, his long career would be marked by a shrewd willingness to venture into ever new forms of communication.

Experts trace the evangelist’s success in television to the phenomenal 1957 Madison Square Garden crusade, which lasted 16 weeks and drew millions in attendance.

Early in the 1957 New York crusade Graham decided to air the Saturday night sessions of the crusade on ABC television. Biographer William Martin said the first show alone generated more inquiries from the television audience than all the people who responded to the Graham message in person at Madison Square Garden during the first nine weeks of the crusade.

Preston Parrish, former executive vice president of the Charlotte, N.C.-based Billy Graham Evangelistic Association, said Graham learned to use television as a way to extend the impact of his words beyond the crowds physically attending his crusades.

“He was a leader in taking that blossoming medium, which was assuming an ever-greater presence in the American home, and using it to be a window on what God was doing in the stadiums around the world where he was preaching,” Parrish said.

The evangelist would later use satellite communications to beam messages to multiple locations, further extending the reach of a crusade. 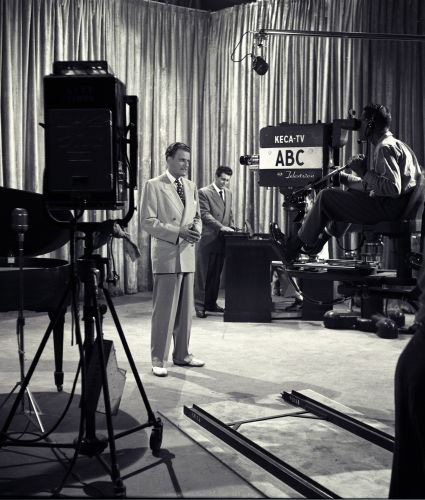 “Thousands of places … were set up to receive the telecasts through small, inexpensive satellite dishes or by means of videotape,” Graham wrote in “Just As I Am,” his 1997 autobiography. “Settings ranged from theaters and sports palaces in the former Soviet Union to the refugee camps of Rwanda and the rain forests of French Guiana,” Graham said.

The evangelist said the 1995 satellite project “may have been the most extensive single evangelistic outreach in the history of the church,” with technology allowing his message to be translated simultaneously into dozens of languages and contextualized by the addition of special music and testimonies tailored to the regions that received it.

Decades before satellite signals would beam Graham across the globe, the evangelist proved himself a pioneer Christian moviemaker.

Graham premiered his first feature movie, “Mr. Texas,” at the Hollywood Bowl in 1951. The evangelist’s movie company, World Wide Pictures, would go on to create more than 100 productions, from short television programs to feature films.

Movies made by the Graham organization include “The Hiding Place,” a 1975 biopic that tells the story of Dutch Christian Corrie ten Boom, who resisted the Nazis during World War II, and “Road to Redemption,” a 2001 comedy that nonetheless includes a Graham message and a conversion scene.

Craig Detweiler, a communication professor at Pepperdine University near Los Angeles, pointed out that the evangelist’s films, while placing characters in fictional situations, used the plots as a narrative package for his spoken word. At a crisis in life, characters turn to God, sometimes listening to Graham preach in a crusade or on the radio.

World Wide Pictures “always had a distinctive commitment to putting Billy Graham and his message … in a prominent place within their film,” Detweiler said. “But they also had an equal commitment … to trying to get real-life characters in genuine jeopardy having to struggle with … complex moral dilemmas,” Detweiler added.

In keeping with its tradition of technological innovation, the Billy Graham Evangelistic Association later streamed selected films from the movie company via the internet.

In 1993, Graham participated in his first internet chat session on his 75th birthday, and made audio of his 2005 pre-crusade press conference in New York available online for the first time.

Looking back over the evangelist’s use of communication technology, Dallas-based Graham publicist A. Larry Ross, speaking shortly before the 2005 New York crusade, said the evangelist “has been very progressive in using every means possible to reach as many people as possible with the gospel.”

With decades of experience working with Graham, Ross added, “Mr. Graham has been faithful … to make positive points for the gospel in any media situation, and God has honored that faithfulness.”