One of the greatest gifts of my years at Publishers Weekly was the chance to work with Phyllis Tickle, who founded our religion department at the magazine and had her finger on the pulse of the religious landscape like no one else.

Phyllis died in September of 2015 after a brief battle with cancer (see my tribute to her here). I’m one of thousands of people who miss her intelligence, her sense of humor, and the ability she had to make you feel as though you were the most important person in the world at that moment.

Fans of Phyllis’s will enjoy the new biography Phyllis Tickle: A Life, by veteran publisher and author Jon Sweeney, who was a good friend of hers. They’ll also learn about several aspects of Phyllis’s life that were not widely known. I certainly did. — JKR

RNS: How much was Phyllis involved in the biography?

Sweeney: The project was determined very soon after diagnosis, and she was involved. The very first step was that when her diagnosis was made public, Michael Lawrence sent me an email and said, “So, are you going to write her biography?” It surprised me. The idea would never have occurred to me, but I thought about it and realized it would be an honor and a delight. Then I took the idea to Phyllis, and I was expecting her to pooh-pooh it, and say, “Who would want to read my biography?” But she said she thought it might be lovely. I was so surprised by her answer that that was my confirmation.

Since this was in the spring of 2015, I then had a few months with Phyllis to work on sources and interview questions, and get all of my ducks in a row. I also had the benefit of the contents of her desk and a lot of materials that were in her office, which were boxed up and sent to me before they went to the Phyllis Tickle collection at Shorter College.

RNS: What surprised you in the research?

Sweeney: There were a couple of things. First, her mystical life. There’s a chapter on that where I lay out the origin and the publication of The Divine Hours. Another was her relationship with [her husband] Sam, particularly around Sam’s sexuality. As I’m giving talks—I’m giving one this week in Texas—I’m deliberately not talking about it there because it feels too glib.

RNS: The revelation that Sam was bisexual was hugely surprising for me too, and that Phyllis knew about it. Major bombshell.

Sweeney: I agree completely. It was difficult for me to discover it and to verify it and to decide to write about it. A printout of Sam’s email about it was in Phyllis’s desk when she died. She knew that I was going to be getting the contents of her desk immediately after her death, and that email—this seemingly random email from 2009—was sitting in her desk drawer by itself. She didn’t want me to not know about this.

RNS: So she let you make the decision about what to do with the information?

RNS: For me another surprise was also that Sam had a temper. When I knew him he was older and seemed like such a teddy bear. He was very kind to me. It was difficult to read about.

Sweeney: That part was not difficult to write about at all. He could be angry and sullen. The kids were very forthcoming, and a couple of Phyllis’s friends. So that was very much publicly understood, particularly by those in Memphis. “Daddy was a difficult person” was a common refrain from their kids.

RNS: Phyllis and Sam lost a child, Philip Wade, which I knew about, but I never knew the details. So it was heartbreaking to read about that period, and the rawness of their grief. It became a wedge in the marriage.

Sweeney: I think some of that is sometimes a male-female dynamic that they dealt with the grief so differently. There’s video evidence where Phyllis discusses that and says that she and Sam were unable to talk about their grief. Also my book shows Sam’s grief is probably related to his professional embarrassment about Philip Wade, because he was a pulmonologist and here was his infant son gasping to breathe. 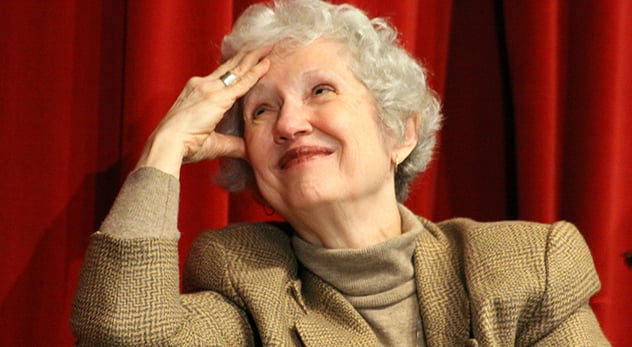 Phyllis Tickle in 2014, the year before her death.

RNS: When was the last time you saw Phyllis?

RNS: Did she have any last words for you?

Sweeney: No, because she wasn’t like that. In the closing chapter where I talk about her final year, there’s a point where I track the social media craze after the news of her diagnosis became public [via David Gibson’s story on Religion News Service]. That was all kind of maudlin, because Phyllis had no interest in sentimentality. She was on her way to a treatment when the story broke, and she had plans for the projects she was going to write.

RNS: Phyllis could be expansive in how she told a story! You point out a few places where there was some “license of the storyteller” going on, where the way an event went down was not always the way she wrote about it later.

Sweeney: I think she very genuinely saw her life as a thing of wonder, which was her great gift, but it also means that the narrative changes. Like the story of when she and Sam sold St. Luke’s Press. She makes it sound in her autobiography like this was a spur-of-the-moment decision reached while standing in the kitchen on a telephone call. But Phyllis and Sam talked about that for months; they strategized. And then there’s the way that she talked about Sam in the autobiography as if he had miracle, shamanic qualities, when in reality she would tell friends he was a packrat and it drove her nuts. People’s best qualities are often the flip side of something that can be negative.

RNS: Tell me about The Farm in Lucy, the land outside Memphis where they raised their kids. It’s so vividly portrayed it’s almost a character in the biography.

Sweeney: It’s one of those details that I always assumed Phyllis Tickle fans knew about already. But what readers may not have known about the farm were the somewhat libertarian views that went along with it. Phyllis and Sam wanted their kids to know what it meant to raise the cow that became their beef, and to raise their own vegetables. And of course the farm became totally a character in her writing. It’s not unlike Port William for Wendell Berry.

She had no interest in dying anywhere else, when the time came. That’s where she wanted to both live and die.

Upcoming talks and book signings for Phyllis Tickle: A Life