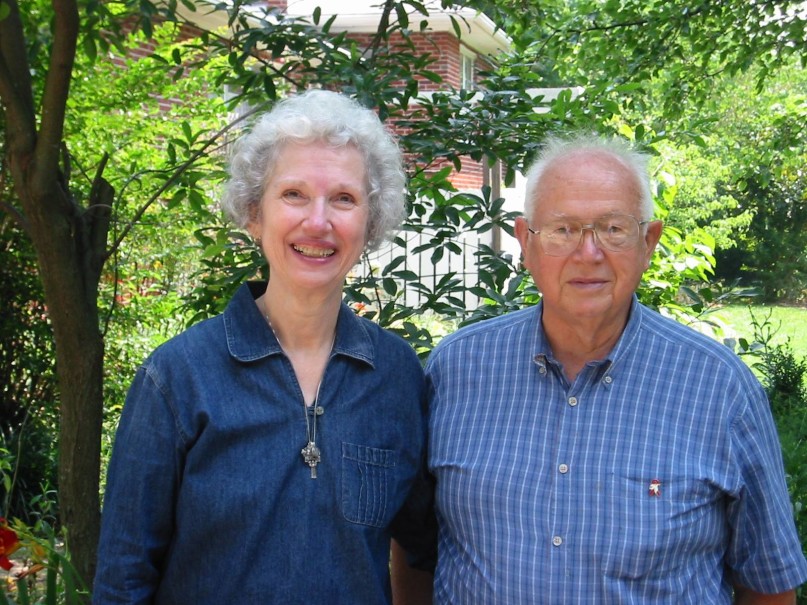 My husband snapped this photo when we visited Phyllis and Sam at The Farm in Lucy about ten years ago. I love the way it captures her spirit.

A light went out of the world today. Phyllis Tickle, who inspired so many, died in her sleep this morning, according to her family.

In May I learned she was sick. Our old “Team Religion” crew from Publishers Weekly—the team she founded and nurtured—were all stunned and saddened by the impossible news. How could Phyllis, so full of energy and creativity into her 80s, be touched by something like cancer?

So that next week I sat down to write her a letter. A gratitude letter, laying out the many things I have learned from her in the sixteen years it’s been my privilege to call her a friend. The letter went on and on, because I just kept thinking of more things to add.

Like the time our PW crew got stranded one AAR/SBL because of a snowstorm. “Snow in November!” the rest of us were grousing. The nerve of that sky! We wondered if we’d make it home in time for Thanksgiving. Everyone was angry.

Except Phyllis, who was like a little kid in her delight, actually clapping her hands together at the prospect of an early snow. I remember looking at her face and realizing it was the first time I could understand how novelists could refer to people’s eyes dancing.

Phyllis taught me that it’s possible to take the “tire” out of retirement — to continue to enjoy writing, reading, and having a vibrant intellectual life long into the golden years.

Related to this, she also showed me that age is just a number, that it’s possible to be BFFs with someone half your age or twice it. Kindred spirits are generation-agnostic.

She taught me that talent in young people must be nurtured. I was a beneficiary of her goodness on this score for years (Phyllis introduced me to two of my publishers and to countless other people), and from the stories I hear, there must be hundreds of us Tickle protégées out there.

I heard one such story when I met Jeff Hardin at the Earlham writing festival a couple of years ago. At a dinner for all the speakers he told us how he first got started as a poet in Tennessee. Growing up, he didn’t know any professional poets, had no models at all to follow, but Phyllis was a sort of poet-in-residence in the Tennessee school system, and she took him under her wing.

When he won a writing contest he got to meet with her in person, and she said something like, “You’re the one I’ve been looking for. Here’s what you do if you want to be a poet.” She made him feel so special, like she had combed the whole state of Tennessee just to discover him. Phyllis was effusive but sincere in praising other people. She always saw the good in them. I think I have saved every single email or letter in which she praised me so highly that it made the tips of my ears burn—including her last letter to me, a beautiful good-bye she sent in June.

I knew those cascades of appreciation were totally over-the-top . . . but on the other hand, they also made me become better, because I wanted to live up to her good opinion of me. I take those notes out every now and again when I am feeling down and I read them, her words encouraging me to keep on keeping on.

And in these last months, Phyllis has been teaching me about one final, very important (and yet not so important), matter: death. Mainly, that it is nothing to be afraid of. Death is merely the next step, the next part of the journey toward the heart of God.

Today, Phyllis became part of that great cloud of witnesses that she wrote about so eloquently in life. In prayer, that great cloud is beside us, she said, ever “unseen but present”—all those Christians “who have preceded one across time or who, in time, will follow one.”

My heart will ache from missing Phyllis. But I take comfort in knowing that she is now part of that great cloud, and will be praying alongside me for however many years I remain in this world.

And someday, God willing, I will see her on the other side, and once again hear her marvelous, mischievous laugh.