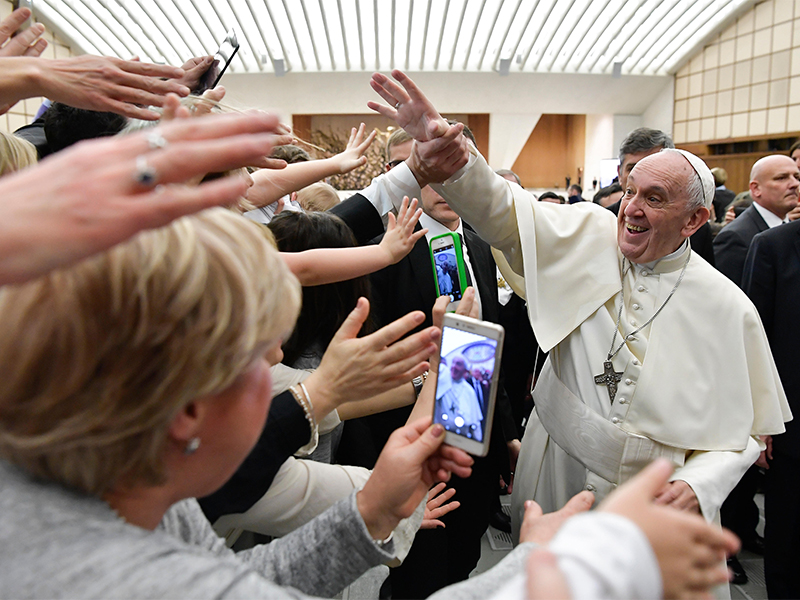 Pope Francis is cheered by faithful during an audience with health workers, in the Paul VI Hall at the Vatican, on March 3, 2018. (L'Osservatore Romano/ANSA via AP)
March 6, 2018
Jack Jenkins

(RNS) — Five years after Pope Francis ascended to the papacy, a new survey of U.S. Catholics reports that most still harbor warm feelings toward the pontiff — but his popularity is waning among political conservatives.

According to a new study from the Pew Research Center, the first Latin American pope retains a soaring 84 percent favorability rating among Catholics overall, with only a 1-point drop since 2014. A majority (58 percent) also still believe he represents a major positive change for the Roman Catholic Church.

But there are signs Francis’ honeymoon period has ended in some circles. Roughly a quarter (24 percent) of American Catholics say he is naive, up from 15 percent in 2015, and 34 percent now say the pontiff is too liberal, compared with 19 percent who said the same three years ago.

The divisions appear to be more political than theological. According to the survey, the share of Republican and Republican-leaning Catholics who say Francis is too liberal has more than doubled since 2015, jumping from 23 percent to 55 percent. Similarly, while only 16 percent of Republican Catholics surveyed in 2015 said Francis is naive, roughly a third say so today.

By contrast, the report shows that when it comes to Democratic or Democratic-leaning Catholics, “there has been no statistically significant change in opinion on either of these questions.”

“Catholics who are Republican and Republican-leaning have become more negative to Pope Francis,” said Greg Smith, associate director of research at Pew. “I think this survey shows very clear evidence that Catholic attitudes about Pope Francis have become very polarized along partisan lines.”

The change follows several years of Francis invoking traditional Catholic social teaching to stake out positions widely seen as politically liberal. Since becoming the bishop of Rome, the pontiff has published an apostolic exhortation deeply critical of unfettered capitalism, repeatedly offered vocal support for immigrants and produced an encyclical calling for action on climate change.

These moves have frustrated many Catholic Republican politicians in the U.S.

House Speaker Rep. Paul Ryan, former Sen. Rick Santorum and former presidential adviser Steve Bannon have all challenged or spoken critically of the pope’s views on things such as economics, refugees and the environment.

President Trump himself, a Protestant, has engaged in a war of words with Francis, who questioned Trump's faith.

“A person who thinks only about building walls — wherever they may be — and not building bridges, is not Christian,” Francis said in February 2016 when asked about the potential of a wall along the U.S.-Mexico border.

Meanwhile, Catholic writers such as New York Times columnist Ross Douthat have railed against the pontiff for rhetoric regarding whether divorced and remarried Catholics should be allowed to receive Communion.

The pope has also garnered attention for his more conciliatory approach to gay people, making headlines in 2013 after he responded to a question about gay priests by saying “who am I judge?” Francis has not, in fact, challenged the church’s traditional opposition to same-sex relationships but has introduced a change in tone on the issue.

The Pew report also suggests U.S. Catholics are more accepting of gay marriage than ever: 67 percent supported same-sex marriage in 2017, compared with 57 percent who said the same in 2015.

“You have to remember, the pope is still the pope,” Smith said.

Compared with previous Pew studies on his predecessors, Francis' favorability ratings surpass any of Pope Emeritus Benedict XVI's and approach those of St. John Paul II in the 1980s and 1990s.

Despite partisan differences on Francis, Catholics from across the political spectrum are in rough agreement about his handling of the child sex abuse crisis.

In 2015, 57 percent of Republican and Republican-leaning Catholics and 56 percent of Democratic and Democratic-leaning Catholics said Francis was doing an excellent or good job addressing the sex abuse scandal. In 2018, the portion of those giving him positive marks on the issue has dwindled to 45 and 44 percent, respectively. (The survey was conducted before the recent media firestorm regarding Francis’ promotion of a Chilean bishop suspected of covering up abuse by a pedophile priest.)

Pew's survey of 1,503 adults was conducted Jan. 10-15 and has an overall margin of error of plus or minus 6.4 percentage points among Catholics.