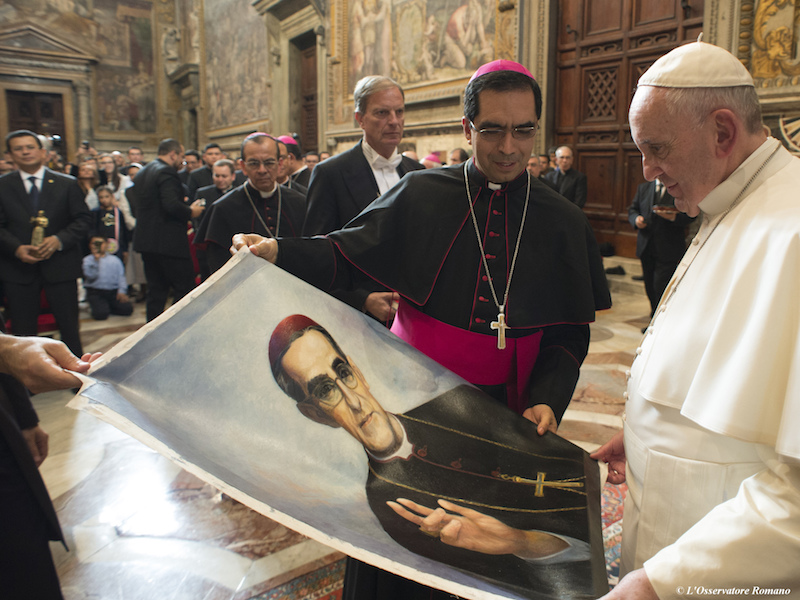 In this Oct. 30, 2015, file photo, Pope Francis is presented with an image of Roman Catholic Archbishop Oscar Romero during a private audience granted to participants in the pilgrimage from El Salvador at the Vatican. Pope Francis has cleared the way for Romero to be made a saint, declaring that a churchman who stood up for the poorest of the poor in the face of right-wing oppression should be a model for Catholics today. (L'Osservatore Romano/Pool Photo via AP)
March 7, 2018
Nicole Winfield

VATICAN CITY (AP) — Pope Francis has cleared the way for slain Salvadoran Archbishop Oscar Romero to be made a saint, declaring that the churchman who became a hero for standing up for the poor and oppressed should be canonized along with the reformer Pope Paul VI.

Francis signed a decree confirming miracles attributed to two of the most important progressive figures in the 20th-century Catholic Church during a meeting with the head of the Vatican’s saint-making office, the Vatican said Wednesday (March 7).

No date was set for either canonization. Vatican officials have previously said Paul VI would likely be canonized in October, during a big Vatican meeting of bishops.

The Vatican official who spearheaded Romero’s sainthood cause, Archbishop Vincenzo Paglia, said he hoped the two would be declared saints together in October, saying a joint canonization would give Catholics a “burst” of energy and example of the need to live one’s life for others.

“I’m in a hurry because there’s an urgent need to change the world,” Paglia told The Associated Press. “The canonization is not just a ceremony. I want it to be a motor for change.”

Another option would be to canonize Romero closer to home, such as when Francis travels to Panama in January for World Youth Day. The big Catholic youth rally will draw tens of thousands of young Catholics from across Central and South America, where Romero is considered a hero.

Romero was gunned down by right-wing death squads on March 24, 1980, as he celebrated Mass in a hospital chapel. The country’s military dictatorship had vehemently opposed his preaching against the repression of the poor by the army at the start of the country’s 1980-1992 civil war.

Paul was responsible for presiding over the conclusion of the Second Vatican Council, the 1962-65 meetings that reformed the church.

“Romero loved to say that the Second Vatican Council asked all Christians to be martyrs today, that is, to live giving your life for others, not for yourself,” Paglia said.

Paglia said Romero’s example of literally paying with his life for the poorest of the poor was particularly needed today, “in a world full of individualism and oppression, where inequality grows rather than diminishes.”

Francis unblocked Romero’s stalled sainthood case at the start of his pontificate and declared him a martyr in 2015.

The case had been held up for years by the Vatican, primarily due to opposition from conservative Latin American churchmen who feared Romero’s perceived association with liberation theology would embolden the movement that holds that Jesus’ teachings require followers to fight for social and economic justice.

St. John Paul II’s conservative Vatican launched a crackdown on liberation theology, but both Romero and theologians associated with the movement have been rehabilitated under Francis’ papacy.

“It has been a long, tortuous journey, full of obstacles and opposition,” Paglia said. “But it has finally reached its conclusion.”

Paglia stressed that Paul and Romero were “great friends” and that Paul’s Vatican II was the inspiration for Romero’s ministry.

“At the closing of the council, Paul VI said the church must be a good Samaritan that helps make the world more serene and just,” Paglia said. “Romero followed the path of the good Samaritan to save those who were nearly dead, and he died himself.”

Romero was beatified in San Salvador on May 24, 2015, before a quarter-million jubilant Salvadorans, and held up as model of peace and forgiveness for Francis’ home continent. Francis himself beatified Paul VI in 2014, at the close of his first synod of bishops dedicated to the family.

The October 2018 synod of bishops is dedicated to youth.

In addition to conservative opposition to Romero, his case was delayed over related questions about whether Romero was killed out of hatred for his faith or his politics. If killed for his politics, it was argued, he couldn’t be declared a martyr of the faith.

In the end, Francis decreed in 2015 that Romero was killed as a martyr out of hatred for the faith — or “in odium fidei.”

Paglia said at the time that the decree had confirmed the acceptance of a new understanding that martyrs can be killed, even by churchgoing Catholics, out of hatred for their gospel-inspired work in favor of the poor and disenfranchised.