If not read carefully, the question seems silly — the Bible belongs to anyone who wants to claim it. I am referring, though, to the new generic top-level domain name — .bible — which is comparable to .com, .gov and newer names such as .law. The domain .bible has been purchased by the American Bible Society, which has set strict limitations on the domain that go far beyond its original application. As time passes, this acquisition will have important implications for Bible-related web searches: .bible website names will be short, easy to remember and highly visible, resulting in a stronger web presence of the Bible, according to the ABS.

When the society — which lists several conservative Christian “founding partners” on the get.bible website — first applied for the rights to .bible, it pledged to provide wide access to “all qualified parties” interested in Bible issues. Soon after acquiring the domain name, though, ABS barred publication of material it defined as “antithetical to New Testament principles” or promoting a secular worldview or “a non-Christian religion or set of religious beliefs.”

Alarmed by this restrictive language, biblical scholars and religious groups reached out to ABS and expressed concerns — with some success. Following discussions with the Society of Biblical Literature, the Anti-Defamation League and the American Jewish Committee, ABS recently revised its policy to invite “a fuller participation for all groups that hold the Bible as their sole sacred text.”

The new policy extends an olive branch in particular to Judaism by prohibiting content that “communicates disrespect for the Jewish faith.” As a Bible scholar who is Jewish, I appreciate this modification. I worry, though, that while Jews are now welcome at .bible alongside mainline Christians, many other groups are excluded, as the new policy bars any content that advocates “belief in any religious or faith tradition other than orthodox Christianity or Judaism.”

Then there’s the question of who decides what constitutes an orthodox opinion in Judaism or Christianity. The ABS would do well to recall, on the 500th anniversary of the Reformation, the oft-cited dictum: “The heresy of today will be the orthodoxy of tomorrow.”

But according to the ABS, disputes about what can be included in .bible will be settled by panelists who affirm the traditional Protestant definition of the Bible, “enthusiastically support” the ABS mission and “believe that the Bible is the Word of God which brings salvation through Christ.” Could such a group, for example, accurately judge whether or not a website disrespects Jewish faith? Could it fairly evaluate Catholic material?

The society’s general mission also raises concerns about its suitability as sole custodian for .bible. Prior to 2001, the society focused primarily on translating and distributing Bibles “without doctrinal note or comment.” The group’s orientation then shifted significantly. Now its website describes the group’s advocacy campaign on behalf of the Bible in public life, including its plans for a Faith & Liberty Discovery Center telling the story of the Bible’s influence on American life. The site describes the .bible domain as part of a broader campaign through which “God’s word will gain cultural credibility.”

Meanwhile, the ABS seems not to understand that there is no consensus among Protestants, Roman Catholics, Eastern Catholics and Jews on what constitutes the Bible, nor is there a single model for the Bible’s origin, authority and interpretation. It would be wrong for a single ideologically driven firm to control the new domain name .law. It is far more wrong for .bible to be controlled by any group interested in promoting a single notion of what the Bible is and how it should be interpreted.

The American Bible Society should again revisit and further broaden its acceptable-use policy for .bible, fulfilling the purpose of its original application. If the society cannot greatly expand its vision for .bible, then the Internet Corporation for Assigned Names and Numbers, or ICANN, which manages global domain names, must revoke the society’s sole control over that name.

The Bible has never belonged to one group alone. Its internet namesake shouldn’t either. Instead, this key internet portal to Bible discussion, debate and scholarship should be open and available to all — just as the book itself always has been.

(Marc Zvi Brettler is a professor of Jewish studies at Duke University and professor emeritus of biblical studies at Brandeis University. He is co-editor of The Jewish Study Bible and The Jewish Annotated New Testament, and co-founder of TheTorah.com. The views expressed in this commentary do not necessarily reflect those of Religion News Service.) 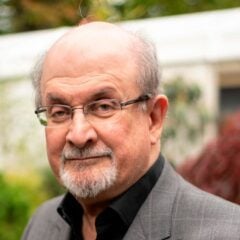