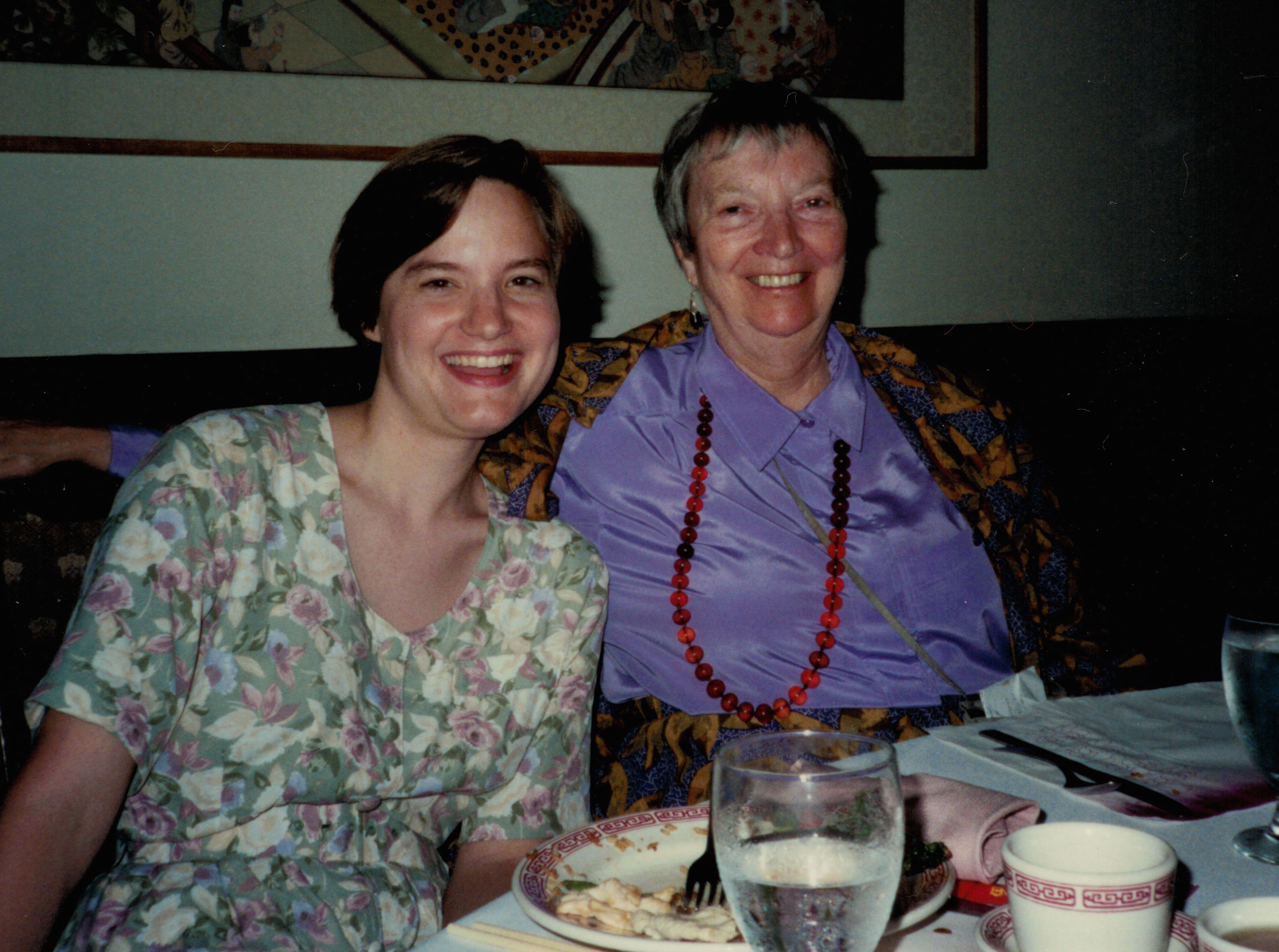 She was and is my favorite writer, and as I wrote in Publishers Weekly when she died in 2007, her work played a part in understanding my own vocation.

To honor her today I'd like to reprint the brief remembrance I wrote after her death, including an account of the two times I got to meet her personally.

I'm lucky enough to have also contributed these memories to Sarah Arthur's forthcoming book  A Light So Lovely: The Spiritual Legacy of Madeleine L'Engle, due out on August 7. (You can pre-order here.)

Sarah was also interviewed this week in the Washington Post in a story about L'Engle's religious faith.

Now that I’ve been an editor at Publishers Weekly for eight years, authors don’t really impress me anymore. Books cross my desk at an alarming rate and are largely forgotten. But there is still magic in my world, animated by those uniquely special books that grab hold of my imagination and leave me changed.

My first such magical book was A Wrinkle in Time. I don’t remember how old I was when I read it, but I certainly remember when and where: it was Christmas Day, and I was ensconced on the dog-haired sofa in our family’s living room. All day. I probably took occasional breaks to race to the restroom or grab some holiday cookies, but my memory is that I read the book cover to cover and ignored every other gift I’d gotten for Christmas.

This began my love affair with the books of Madeleine L’Engle—books I saved my hard-earned allowance for, devoured quickly, and then returned to in order to savor again and again. When I was applying to colleges, my Wellesley application asked me to write about any individual—past or present, real or fictitious—I would most want to learn from as an apprentice, and to explain why. I chose Madeleine L’Engle, not because I wanted to be a writer—I had no literary ambitions and (incredibly, now) aspired to practice international law—but because I wanted to be her. Her books had stretched my imagination irrevocably, and while I didn’t know it at the time, they served as the core of my fledgling Christian beliefs. The world I wanted to inhabit was the one I glimpsed in her books.

Fast forward a few years. I was flipping burgers in my job at the Wellesley student center when a friend conveyed the news that our graduating class had chosen Madeleine L’Engle as our commencement speaker. Emboldened by the brazenness that can only be mustered when one is twenty-one, I sat down that night in my dorm room and wrote her a letter, inviting her to dinner. I was shocked when I got a call a week later from the author’s secretary, accepting the invitation. (I later found out that Madeleine declined a subsequent invitation to dine with the president of the college because she would not break a prior commitment to me and my friends.) And could my friends and I possibly pick Madeleine up at the airport? Of course we could.

The day before graduation was a blur—fighting traffic to fetch Madeleine from Logan Airport, and bringing her to her booksigning fifteen minutes late (this in the days before cell phones); peppering her with questions at dinner as we passed succulent dishes of Chinese food. Madeleine was warm and gracious and opinionated, just like her books. She appeared as interested in us as we were in her.

My much younger self with Madeleine L'Engle in 1991.

Many years later, having abandoned all thoughts of a career in law, I was in New York for another graduation of sorts. It was the day I defended my dissertation. After the defense, my committee members took me out to dinner at a lovely little café in the Upper West Side. Who should be there but Madeleine L’Engle? She was older, yes, and in a wheelchair, but I recognized her immediately and went over to speak with her. She remembered our Wellesley evening (though not me specifically) and congratulated me for having successfully completed my Ph.D. It felt like remarkable serendipity—providence, even—that she should appear at this second kind of graduation, offering a benediction on the completion of my drawn-out education.

Madeleine L’Engle passed away last week, and while I was not surprised—I have been hearing rumors for some time of her failing health—the death held an unexpected, dreaded finality. There will be no more L’Engle books to look forward to. That canon is closed forever. But as with any death, it has prompted me to take stock of my life, and I have to confess I’m humbled and delighted by what I see. I now have much of that world I longed for when I was a child reading her books: a life rich in family and faith, great books and kind friends. I’ve been privileged to lead a life blessed by a limitless imagination and a love of language.

Thank you, Madeleine L’Engle, for opening my world. May you tesser well.