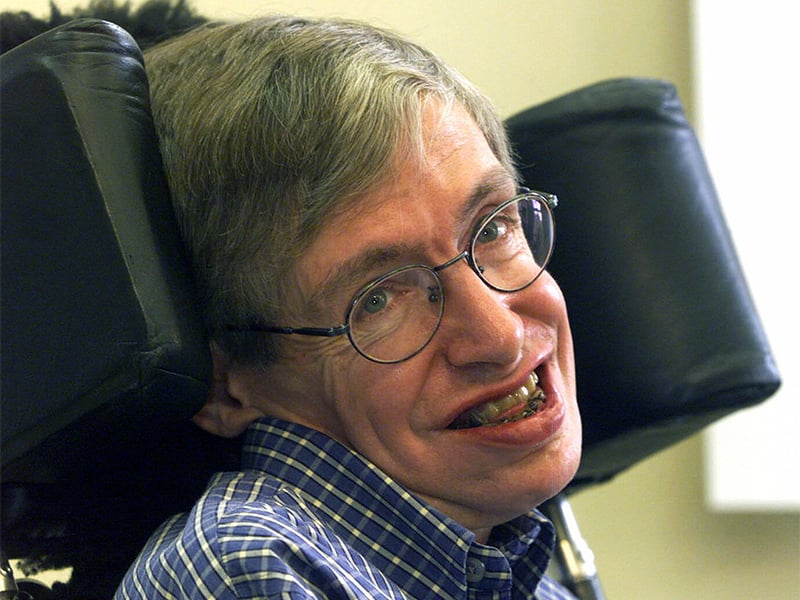 Professor Stephen Hawking smiles during a news conference at the University of Potsdam, near Berlin, Germany, on July 21, 1999. Hawking, whose brilliant mind ranged across time and space though his body was paralyzed by disease, has died, a family spokesman said early Wednesday, March 14, 2018.(AP Photo/Markus Schreiber)
March 14, 2018
Kimberly Winston

(RNS) — Say the words "British," "scientist" and "atheist" and the first person to come to mind probably isn't Stephen Hawking.

But while Hawking, the theoretical physicist who died Wednesday (March 14) at age 76, was certainly overshadowed in the atheist department by his countryman, the evolutionary biologist and atheist activist Richard Dawkins, Hawking's atheism was more of a slow simmer than Dawkins' explosive ire.

"What could define God (is thinking of God) as the embodiment of the laws of nature. However, this is not what most people would think of that God," Hawking told Diane Sawyer in 2010. "They made a human-like being with whom one can have a personal relationship. When you look at the vast size of the universe and how insignificant an accidental human life is in it, that seems most impossible."

One reason Hawking's atheism was less well-known was he seemed to fudge the question of God's existence for years. In his 1988 seminal best-seller, "A Brief History of Time," he wrote, "The whole history of science has been the gradual realization that events do not happen in an arbitrary manner, but that they reflect a certain underlying order, which may or may not be divinely inspired."

Later in the book, he writes of the quest for a unifying theory of the universe: "It would be the ultimate triumph of human reason — for then we should know the mind of God."

Some saw those statements as proof that Hawking held private religious beliefs. He fed that idea with a few statements over the years — "The laws may have been decreed by God," he told Reuters in 2007, "but God does not intervene to break the laws" — and even titled a 2005 book "God Created the Integers."

He also went to the Vatican and met briefly with then-Pope Benedict XVI in 2008.

Then, in 2010, with the publication of "The Grand Design," Hawking seemed to have begun a sort of atheist striptease, slowly revealing his nonbelief:

"Because there is a law such as gravity, the universe can and will create itself from nothing," he and co-author Leonard Mlodinow write. "Spontaneous creation is the reason there is something rather than nothing, why the universe exists, why we exist. It is not necessary to invoke God to light the blue touch paper and set the universe going."

Within a year, Hawking said in a Discovery Channel documentary: "We are each free to believe what we want and it is my view that the simplest explanation is there is no God. No one created the universe and no one directs our fate."

And just in case that wasn't clear enough, Hawking dropped the last veil in a 2014 interview with the Spanish newspaper El Mundo.

"What I meant by 'we would know the mind of God' is, we would know everything that God would know, if there were a God. Which there isn't. I'm an atheist."

After his death, some atheists remarked that Hawking's outlook on having just this one life, which was marked, for him, by debilitating Lou Gehrig's disease, fortified their own lack of belief.

"Hawking had to aggressively face his own mortality every single day, it would have been understandable for him to abandon evidential reasoning and fall into the old adage that there are 'no atheists in a foxhole,'" Lianna Brinded, an atheist, wrote in the online magazine Quartz. "Instead, he continued to approach his stance on religion with scientific evidence-based reasoning."