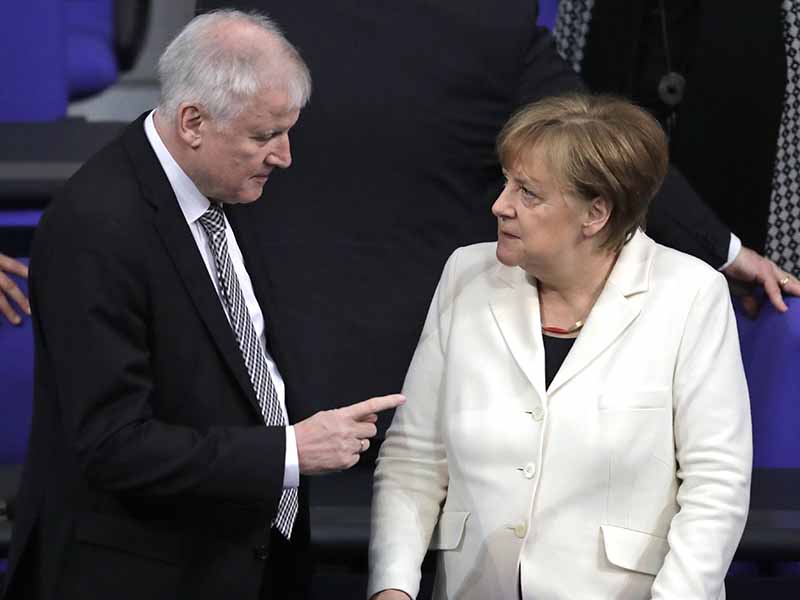 In this March 14, 2018, file photo, German Interior Minister Horst Seehofer talks to Chancellor Angela Merkel in the German Parliament in Berlin. Germany’s new interior minister is positioning himself to the right of Merkel on migration, telling a newspaper on March 16, 2018, that Islam is not a part of Germany. (AP Photo/Markus Schreiber,file)
March 16, 2018
Jerome Socolovsky

BERLIN (AP) — Germany's new interior minister said Friday he doesn't consider Islam to be a part of Germany, a position that puts him at odds with Chancellor Angela Merkel on the central question of migration.

Horst Seehofer, the country's top security official, told the Bild newspaper that "Islam doesn't belong to Germany," but added that "the Muslims who live with us are, of course, part of Germany."

Seehofer said his message to Muslims was: "Live with us, not parallel to or against us."

His Bavaria-only Christian Social Union, which has always taken a harder line on migration than Merkel's conservative Christian Democratic Union, faces a state election later this year in which the anti-Islam Alternative for Germany party is expected to do well.

Asked about Seehofer's comments, Merkel said while Germany is shaped by its Judeo-Christian heritage, "now there are 4 million Muslims living in Germany" — a country of about 82 million people.

She added that the Islam practiced by Muslims in Germany would have to conform to the country's constitution.

The head of the Turkish Community in Germany, Gokay Sofuoglu, called Seehofer's comments unhelpful at a time when the country is again seeing a rise in attacks on mosques and other Islamic institutions.

"Religious freedom is without a doubt part of Germany," said Sofuoglu. "It's in the constitution."

The phrase "Islam is part of Germany" was coined by former President Christian Wulff in 2010 and has since become a battleground for those who oppose mass migration from Muslim countries.

The Alternative for Germany's campaign in last year's election — which saw the party win seats in national parliament for the first time — included the statement that "Islam is not a part of Germany."