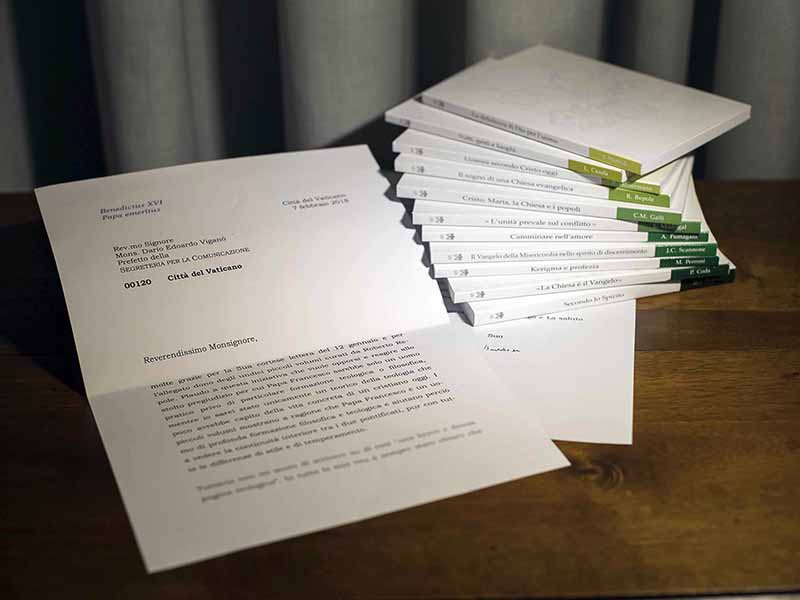 In this photo of a letter released by Vatican Media, Pope Emeritus Benedict XVI praises a volume of books about the theological training of Pope Francis. The Vatican admitted March 14, 2018, that it blurred the final two lines of the letter's first page, where Benedict begins to acknowledge that he didn't read the books and doesn't have time to write a theological assessment of Francis as requested. (Vatican Media photo via AP)
March 21, 2018
Thomas Reese

VATICAN CITY (RNS) — The ability of church officials to be their own worst enemies has been on display the past two weeks as the Vatican has been rocked by the scandalous handling of a letter from Pope Benedict about a series of books on the theology of Pope Francis.

The fiasco resulted in the resignation on Wednesday (March 21) of Monsignor Dario Vigano, head of the Vatican's communications department.

The 11 books had been released on March 12 at a press conference led by Vigano. The purpose of the books was to show that Francis is neither a heretic nor the theological lightweight as his detractors claim.

Prior to the release of the books, the priest asked the retired pope to write a letter on the books.

At the press conference, Vigano read from the letter but did not release it to the press. He quoted from the parts of the letter where Benedict praised the project for showing the continuity between his and his successor’s teachings.

"I applaud this initiative," wrote the retired pope, "which intends to oppose and react to the foolish prejudice by which Pope Francis is only a practical man bereft of particular theological or philosophical formation, whereas I was only a theoretician of theology, who little understood the concrete life of a Christian today.

"The small volumes rightly show that Pope Francis is a man of profound philosophical and theological formation," he continued, "and, therefore, help to see the interior continuity between the two pontificates, although with all the differences of style and temperament."

In this March 12, 2018, photo, head of Vatican communications department Monsignor Dario Vigano poses for a photo call to present the show "Giudizio Universale" (Last Judgment), Michelangelo and the Secrets of the Sistine Chapel, at the Auditorium Conciliazione, in Rome. On Wednesday, March 21, 2018, the Vatican announced that Vigano had resigned over a scandal about a letter from retired Pope Benedict that Vigano mischaracterized in public and then had digitally manipulated in a photograph sent to the media. (AP Photo/Gregorio Borgia)

But Vigano also read Benedict’s caveat that he had not read the books because of his age and other commitments, and therefore he could not comment on them.

The Vatican also issued a press release with the positive quotes but lacking Benedict’s caveat, making it look like he had endorsed the books. It also released a photo of the letter in which the bottom of the first page containing the caveat was blurred. The second page of the letter was almost completely covered by the books from the series. Only Benedict’s signature was shown.

Sandro Magister, a conservative Vatican commentator who was at the press conference, criticized the Vatican for failing to mention that Benedict had not read the books.

Meanwhile, Nicole Winfield of The Associated Press became suspicious of the blurred photo. She asked AP photographers to examine the photo, and they concluded that the photo had been digitally altered, a mortal sin in photojournalism.

All of this forced the Vatican to finally release the entire letter, where it was found that Benedict had actually questioned the involvement of German theologian Peter Huenermann in the project because Huenermann "during my pontificate came to light for having headed anti-papal initiatives."

Huenermann, he continued, had "attacked virulently the magisterial authority of the Pope, especially on questions of Moral Theology."

After losing all credibility with the press, Vigano was forced to resign and the pope reluctantly accepted his resignation.

Vigano has no one to blame for his demise other than himself. His first mistake was asking Benedict for the letter. You don’t ask a German theologian like Ratzinger for a puff piece.

Once Vigano saw the letter, he should have never used it. Selectively quoting from it was unprofessional. Thinking he could get away with it without being caught out was naïve. Not coordinating his spoken words with the Vatican press release was incompetent. Spinning Benedict's words into an endorsement of the books was dishonest.

Vigano was not a popular figure in the Vatican. His background was as a film critic, with no experience in news journalism or as a manager. Those under him complained that he did not consult or delegate.

In his defense, the pope had given Vigano an impossible job — reorganize Vatican communications, bringing it into the 21st century, without firing anyone.

For decades, the Vatican has had a press office, newspaper, radio, TV center, printing establishment, website and assorted news services that were independent entities with little coordination. Running and reorganizing this mess would have been a challenge for an experienced professional, but Vigano was out of his depth and alienated many of the people working for him.

One positive lesson from this fiasco is that it was relatively easy to get rid of Vigano because he was only a monsignor. If he had been a cardinal or bishop, he would have kept his job until they found him a face-saving position somewhere else in the church. As a simple monsignor, he could be removed quickly by Vatican standards.

Many are happy to see Vigano go, but Vatican communications will stay in the dark ages until the pope finds someone up to the task and gives him the authority to not only reorganize but to fire and hire.