WASHINGTON (RNS) — When Lydia Catterall, a junior at Norcross High School in Norcross, Ga., was asked why she was participating in the March for Our Lives demonstration to protest gun violence in the nation’s capital, she was quick to cite the tragic school shooting that left 17 people dead in Parkland, Fla., in February.

But she was just as quick to reference her faith community: Central Presbyterian Church in downtown Atlanta.

“At Central, the main theme you’ll see is acceptance — sort of trying to create a world where we can all accept each other,” Catterall said on the ride up to Washington the day before participating in the march on Saturday (March 24).

Speaking on her pastor’s phone, Catterall had to raise her voice to drown out the chatter of 10 other high-schoolers from her church youth group making the trek along with her, their pastor at the wheel. All of them were commissioned to participate in the protest during worship the weekend before.

After rattling off the list of gun control policies she’d like to see passed by Congress — background checks, raising the age limit to purchase guns and other restrictions on assault weapons — Catterall asked others to shout out the slogans on their pre-made signs.

Come Saturday morning, Catterall and her friends joined a broad swath of faith groups from across the religious spectrum who participated in the Washington protest, each making the religious case for ending gun violence — often at the urging of their youth.

The March for Our Lives, a protest led by Parkland’s Marjory Stoneman Douglas High School students and geared toward ending gun violence, drew an estimated 800,000 participants on Saturday in Washington, D.C., according to organizers. In addition, more than 800 similar demonstrations were held in cities across the globe in solidarity.

Faith groups are hardly newcomers to the gun control debate. In addition to longstanding activism on the local level, religious leaders emerged as prominent voices pushing for gun control legislation in the aftermath of the December 2012 shooting at Sandy Hook Elementary School in Newtown, Conn., in which a gunman fatally shot 20 children and six adults. At the time, then-dean of the Washington National Cathedral the Very Rev. Gary Hall proclaimed from the pulpit that “the gun lobby is no match for the cross lobby.” 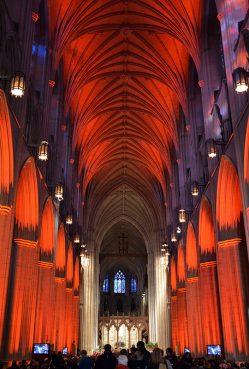 Orange lights illuminate the Washington National Cathedral during a vigil for gun violence victims on March 23, 2018. The vigil was held ahead of the March for Our Lives demonstration. RNS photo by Jack Jenkins

The legacy of this faith connection was on full display Friday night, when the cathedral hosted an interfaith vigil for victims of gun violence, its archways bathed in orange light to match the featured color of the march.

In addition to prayers from Hindus, Buddhists, Sikhs and other faith leaders, the liturgy included short reflections from those touched by recent tragedies, such as a pastor who lost her mother in the 2015 Charleston church shooting that resulted in the deaths of nine black churchgoers.

April and Philip Schentrup, parents of Stoneman Douglas student Carmen Schentrup, who was killed in the shooting, also spoke. April Schentrup struggled to hold back tears as she recalled her final evening with her daughter: a dinner at their church, where Carmen served as president of her youth group.

“Prayers do not feel like enough,” April said, her voice shaking as she reflected on her grief. “We must act — we must act to change current laws that allow profound devastation and heartbreak.”

Without new laws, she said, “we are condemning more of God’s children to desolate despair and gut-wrenching tragedy.”

Later, as the crowd stood holding candles in remembrance of those who have died, Bishop Mariann Budde of the Episcopal Diocese of Washington lauded those fighting to end gun deaths.

“One day, stories will be told of the people who rose up to ensure that the scourge of gun violence will leave this land — and you are those ones,” she said. “Together, we seek the blessing of the Almighty who … sends us out now to be holy hands and feet marching for the future God prefers.”

On Saturday, faith groups showed up in force. Roughly 3,000 members of the Union for Reform Judaism — the largest Jewish denomination in the United States — gathered Saturday morning to worship and pray before joining the demonstration to “pray with their feet.” Speakers included Florida Democratic congresswoman Debbie Wasserman Schultz, organizers with the Reform Jewish Youth Movement and Stoneman Douglas students.

Attendee Charles Goodman, a 15-year-old survivor of the Parkland shooting who played basketball with one of the victims, several of whom were Jewish, cited both his harrowing experience and his faith as reasons for joining the march. Congresswoman Debbie Wasserman Schultz (D-FL) addresses a gathering of Reform Jews the morning of the March for Our Lives protest in Washington, DC on March 24, 2018. RNS photo by Jack Jenkins.

“The Jewish people have a saying: thou shall not stand idly by while your neighbor’s blood is shed,” Goodman, a sophomore, said in an interview.

“My neighbor’s blood, my schoolmate’s blood, my teacher’s, my administrators’, my athletic director’s — their blood has been shed. At this point, it is up to the survivors, and those who want to help the survivors. … And it’s crucial we get the support from the Reform movement, because if we believe in our faith, then this is the right thing to do.”

The Rev. Corey Gibson, youth and young adult pastor and director of ministries at First Baptist Church Vienna, Va., said his church was sending a delegation of 35 after they were urged to do so by a high schooler in the congregation. Other young members of the historically black church joined in, making flyers, crafting social media posts and standing up during worship to encourage their fellow worshippers to participate in the march.

The message, Gibson said, was that it’s not enough “just to say these gun violence victims are in our thoughts and prayers,” but that it’s also “important that we stand up and make sure things are put in place so this cycle is not repeating.”

Christian social justice organization Sojourners also held its own rally ahead of the march, and other religious groups joined forces for the event.

The Islamic Society of North America teamed up with the Friends Committee on National Legislation (part of the Religious Society of Friends, also known as Quakers) to hold a prayer service, advocacy training and sign-making party early Saturday morning. They later joined several other religious groups in front of the United Methodist Building near the Supreme Court for a short interfaith vigil featuring members of the United Methodist Church, Disciples of Christ and others. The group held aloft signs emblazoned with slogans such as “Faith Over Firearms” and “Jesus loved the little children.”

Luqman Sabour, a young Muslim Washington resident and a survivor of gun violence, invoked a passage from the Quran to explain his activism, saying, “if you save one life, it’s as if you’ve saved mankind — the whole humanity.” A protester holds a sign aloft at the March for Our Lives demonstration in Washington, D.C. on March 24, 2018. RNS photo by Jack Jenkins

Many worship communities participated in protests across the country in solidarity with the Washington march. In Chicago, a bevy of Jewish, Christian and Muslim communities gathered for an interfaith rally in the city’s downtown before heading to a demonstration. In Denver, Episcopalians and Lutherans gathered at Saint John’s Cathedral before walking down to the protest.

In Atlanta, Central Presbyterian Associate Pastor Michelle Hwang said the church’s middle schoolers — along with high schoolers not traveling to Washington — participated in the Georgia city’s March for Our Lives demonstration. She said the church operated a “hospitality” station offering water to participants, and later hosted a voter registration drive for 17- and 18-year-olds run by the National Coalition for Voter Justice.

“Sunday is Palm Sunday … (when) those who were oppressed were having a protest against the government — so it seems very appropriate to be participating in this protest this weekend,” Hwang said.

Faith-based efforts have largely fallen short of persuading Congress to pass robust gun control legislation, but advocates are hopeful the vibrancy and determination of a new generation may tip the scales. And if the passion of churchgoing youth such as Lydia Catterall and her cohorts at Central Presbyterian are any indication, energy around the issue is unlikely to dissipate anytime soon.

“I have been carrying an anti-gun pin on my backpack for four years now,” Catterall said. “Our whole youth group is very passionate about this.”