(RNS) — Frank Page, the Southern Baptist Convention’s top executive, is retiring as president and CEO of its executive committee following what he called a “personal indiscretion.”

The retirement, for which no reason was given when it was first announced earlier Tuesday (March 27), is immediate.

A story in the Baptist Press, an official publication of the Nashville, Tenn.-based Southern Baptist Convention, described the indiscretion as “a morally inappropriate relationship in the recent past.”

Page himself alluded to it, saying, “As a result of a personal failing, I have embarrassed my family, my Lord, myself, and the Kingdom.

“Out of a desire to protect my family and those I have hurt, I initially announced my retirement earlier today without a complete explanation. However, after further wrestling with my personal indiscretion, it became apparent to me that this situation must be acknowledged in a more forthright manner. It is my most earnest desire in the days to come to rebuild the fabric of trust with my wife and daughters, those who know me best and love me most.”

“This news will, we understand, bring great sorrow,” Rummage said. “I have shared with the Executive Committee officers what Dr. Page shared with me, including Dr. Page’s repentance and deep regret that his actions have caused pain for others.”

Page was known for bridging the denomination’s various divides. In 2013, Page helped bring together Calvinists and non-Calvinists during a squabble within the denomination about the theology of salvation. And last year, when some churches threatened to cut off support for the SBC after chief ethicist Russell Moore criticized Donald Trump, Page met with Moore and the two issued a statement of unity.

Page, 65, was a successful church pastor for many years before assuming his position in the denomination, most recently at First Baptist Church, Taylors, S.C.  He then served for two terms as president of the denomination, the nation’s largest, from 2006-2008.

“Prayers appreciated as I have announced my retirement,” he initially wrote on Twitter, thanking his followers for “your precious friendship and prayers.”

In a letter to members of the SBC’s executive council, Page wrote, “It has been my joy and honor to serve the Executive Committee of the Southern Baptist Convention for eight years.”

He said he and his wife, Dayle, wanted to move closer to their daughters and return to South Carolina from Nashville, where the executive committee is based, “so that we might spend more time with them and their families — especially our grandchildren.”

“After much prayer and conversation, we have chosen to make this decision,” Page wrote, according to Baptist Press.

Several dozen Baptist pastors and leaders had responded to his initial tweet and offered their well-wishes:

Thank you for leading us well, keeping the mission of God's love for all people the main thing, & being a great friend. You've served us all well, Frank.

God bless you as you move toward retirement. You are a fine leader, and you have been a huge blessing to Southern Baptists. 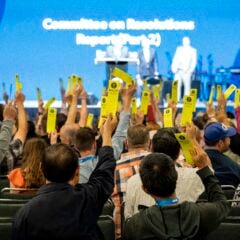